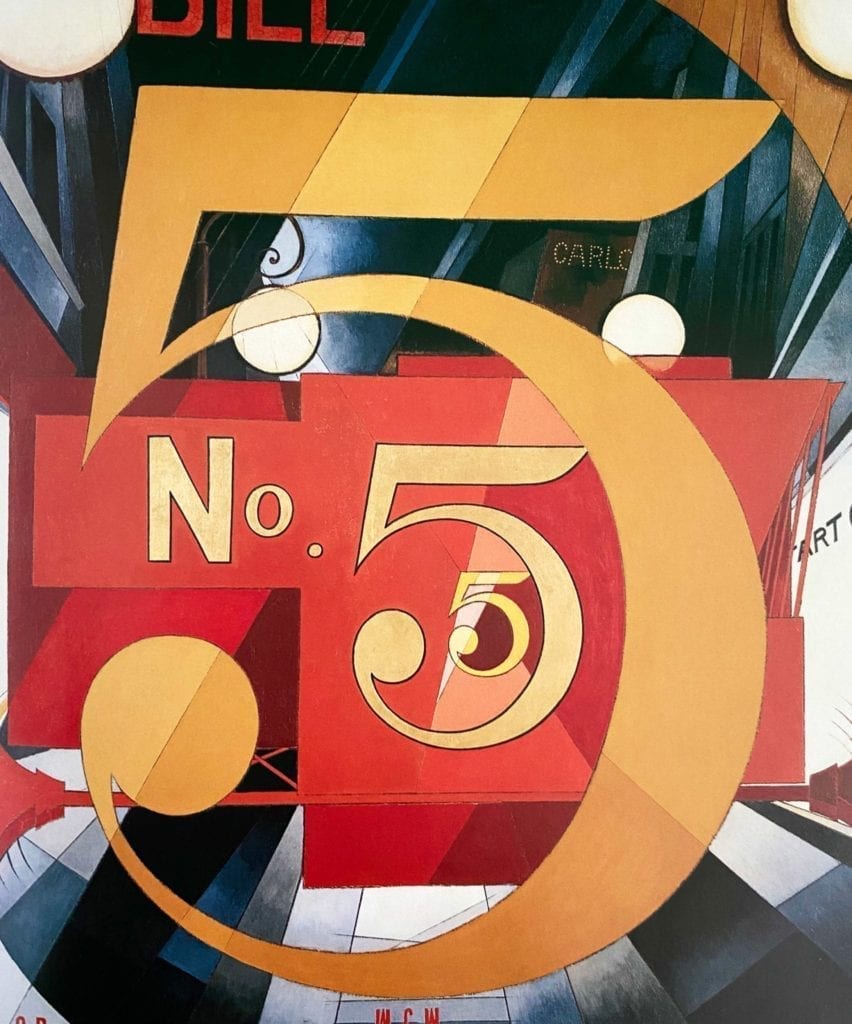 Why is Charles Demuth’s I Saw the Figure 5 in Gold one the top 100 NYC paintings?

I Saw the Figure 5 in Gold packs heart into a paperboard. Its careful construction, symbols, and linearity form a poignant homage. The painter, Charles Demuth, was a long time friend of William Carlos Williams. He created this painting around a phrase in his friend’s poem The Great Figure. That section says:

Among the rain and lights I saw the figure 5, in gold, on a fire truck, moving, tense, unheeded, to gong, clangs, siren howls, and wheels rumbling through the dark city.

These powerful words speak to us in Demuth’s portrayal. We don’t need to know the poem to see its picture. The imagist poem comes to life as a fire truck barrels through the stormy dark city at night. Thanks to sharp red, edges and angled stripes, viewers sense the speed of an emergency in action. We sense the cold bite of heavy rain. It’s the kind of night that sends a chill deep into the bones.

Yet there’s also a fire in I Saw the Figure 5 in Gold. Not only with the fire engine at the center. The gold and red images burn with energy pounding through the painting. It reminds me of running in place to keep warm. The mission within the painting is fighting a fire. In this world, even torrential rain doesn’t quell a blaze.

We don’t need Demuth’s word that this painting’s an ode to poet William Carlos Williams. Though we do have that. They were friends at the Pennsylvania Academy of Fine Arts. This friendship then lasted another twenty five years. I Saw the Figure 5 in Gold illustrates their connection. At the top we can see the bottom half of Demuth’s nickname for his pal – Bill. There’s also a “Carlos” in marquee lights atop a rainy building within the figure 5. Finally, at the very bottom of the number, Demuth sits the poet’s initials at the very center.

A Poem Within a Painting

Art genres intersect in I Saw the Figure 5 in Gold. This parallels the friendship that inspired it. There’s power in close relationships. That fuels this masterpiece. The people we know often help us understand ourselves. William Carlos Williams’ words re-emerge as a visual poem on this canvas. It plays out as the same story within a fresh and illuminating frame. With a friend telling the familiar poem’s story, a whole new way of seeing this scene emerges. This amplifies the urgency of its message.

I Saw the Figure 5 in Gold started a new art sub genre as well – the poster portrait. He painted this on Upson poster board using oil, graphite, ink, and gold leaf. The first of its kind in 1928, this piece inspired a series. Unique as it was, Demuth was only getting started. He planned to create ten total poster portraits. Each one to serve as an homage to an artist close to Demuth. But he ended up only making eight. This included one for American painter Georgia O’Keeffe.

I note this particular choice because O’Keeffe was in style cahoots with Demuth. They were both leaders in the Precisionist Art Movement. This distinctive style presents subjects in a quasi cubist way. Precisionist works often depict landscapes in a sharp, defined manner. There’s no hint of abstraction and lots of linearity. There are clear signs of this burgeoning in I Saw the Figure 5 in Gold. But this painting’s a masterpiece thanks to the poem it brings to life.

My favorite thing about this masterwork is that vitality. Demuth’s ode to his friend seems charged with frenetic energy. That’s thanks to the electricity viewers feel facing it. The painter imbues it with several frantic elements. For example, he cuts off the name at the top and words on the right side of I Saw the Figure 5 in Gold. This gives the impression of capturing the scene in motion – like a snapshot. Other elements add a crackle of intensity to the piece. The shiny gold leaf and slashes across the canvas have this effect. Finally, Demuth contrasts stark white circles with vigorous black stripes. This creates even more motion.

These aspects unify the scene in I Saw the Figure 5 in Gold. So, it seems to burst toward us. There’s a sense of surprise in that. This reminds me of a siren careening down the streets. The sound’s always unexpected. Demuth captures our attention with his visionary poster much like a siren startles. We’re awakened with this masterpiece.

Where can I see Charles Demuth’s I Saw the Figure 5 in Gold in person?

I recommend checking out I Saw the Figure 5 in Gold at the Metropolitan Museum of Art. It’s a vibrant spectacle in person. Housed in their American section, the museum describes this piece as an abstract portrait. That’s because it honors Demuth’s friend William Carlos Williams. But it doesn’t depict the poet. Instead, Demuth brings a scene from his friend’s poem (of the same title) to life. So, it’s more a portrait of the poet’s work rather than the man himself.

That’s why I find it fascinating that the Met categorizes the painting this way. After all a man isn’t their work. So, how is this a portrait of William Carlos Williams? It’s not. Instead, it’s filled with specific details of his poem. These striking aspects tell us one thing about the man – he was a masterful imagist poet. His words impact us through the painting. Thanks to Demuth, we can feel their power. So, he gave his close friend a gift of more than a masterpiece with this. In I Saw the Figure 5 in Gold Demuth pulled the poem off the page and into a greater world.

What kind of painting is I Saw the Figure 5 in Gold?


Charles Demuth’s work fits into many categories. From the vast genre of Modernism to the poster portrait niche. But most of the types sit somewhere between the two. These include Expressionism, Realism, Abstract, and Precisionism. This painting works for each of these categories in different ways. But the most important category for I Saw the Figure 5 in Gold is the one it started. This was Demuth’s first in a series of poster portraits. He reframed his friends and their work with these eight iconic paintings.

Demuth’s poster portraits started a trend in the late 1920s and early 1930s. This piggybacked on the Art Nouveau poster trend that ran from the late 1800s to the early 1900s. Most of these were figurative and focused on the beauty of each subject. In contrast, poster portraits were more abstract. They served as homage to great artists and their work rather than simply portraying them.

Enjoyed this I Saw the Figure 5 in Gold analysis?

The United States of America, a catalog from The Metropolitan Museum of Art Libraries

“The Great Figure by William Carlos Williams”. The Poetry Foundation.