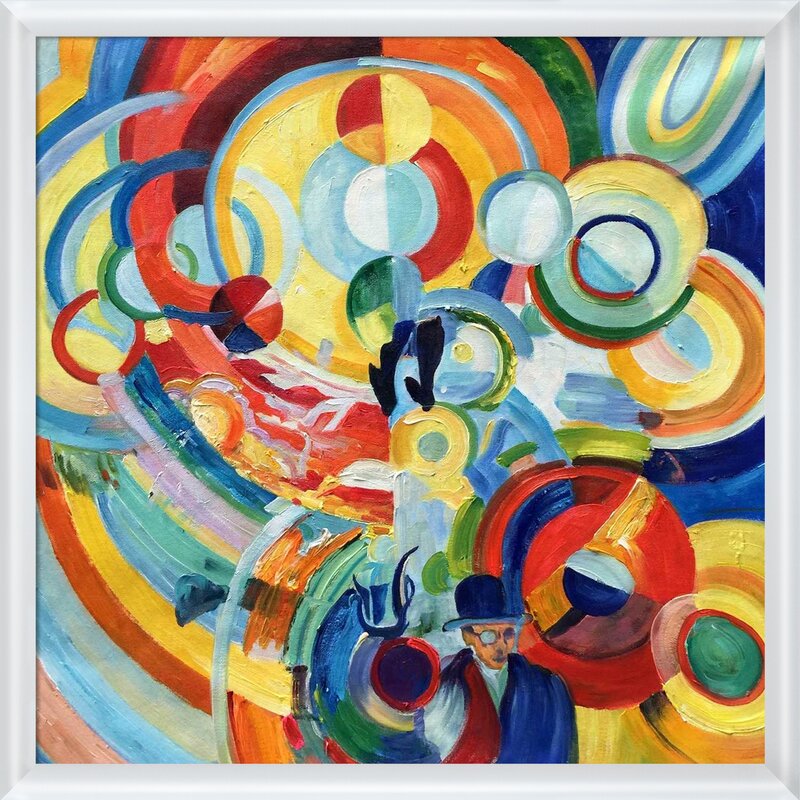 Why is Robett Delaunay’s painting Carousel of Pigs a masterpiece?

The 1922 Carousel of Pigs wows us with a swirling net of circles and curves. At first glance, it’s like looking through a kaleidoscope. That’s because Robert Delaunay cared most about color. There’s no better example of his prismatic vision than this masterwork. It’s also special because this is his second version. In 1906, Delaunay was quite a different painter when he created the first Carousel of Pigs. Viewers can compare the two for a clear picture of how his artistic vision shifted.

That’s what I love best about this Delaunay. Looking at the earlier version, the painter’s vision remains unclear. It’s an intriguing painting. But there’s little payoff. Delaunay had the skill to get us looking deeper in 1906. Yet it took some time for him to express his full vision. During the interim between each Carousel of Pigs, Delaunay worked in Orphism. This art movement was also called Orphic Cubism. It was a Cubist subcategory. But many big shots, such as Marcel Duchamp and Fernand Leger also indulged in Orphism.

Robert Delaunay also married fellow Orphic painter, Sonia Delaunay during this time. They often did projects together. In fact, they co-founded the Orphism movement as a team with a few other artists. Most art historians agree that Picasso’s friend, Apollinaire, was the primary catalyst. But if you mention Orphism, the Delaunays are likely the exemplars that come to mind. That’s because of distinctive paintings like Carousel of Pigs. It’s his color and contrast obsession that distinguishes Delaunay works.

Robert Delaunay injects this work with such vivid hues, it seems to vibrate. We get that action thanks to bright, saturated, opposites next to each other. For instance, the contrasting deep reds and pale yellow across canvas. These colors never make a full circle on the canvas. There’s always a break in hue where a contrasting color continues the shape. This happens a lot with red and very pale yellow in Carousel of Pigs. That may be Delaunay’s way of compensating for the lack of pink in the painting.

Where are the Pigs in Carousel of Pigs?

Speaking of pink, viewers might wonder about the pigs mentioned in the title. Where are they? It takes a deeper look for clues. Circles remind us of the Carousel in Delaunay’s title. But they also bring pigs to mind. After all, pigs make such good banks thanks to their round bellies and bottoms. Pig snouts are also circular. As viewers scan the Carousel of Pigs we can discern pig parts galore. There’s even a hoof on our center left side of the painting. It’s represented in a small dark circle that’s half red. This sphere contains a pale pink triangle that alters its shape just enough to suggest a pig foot.

To the left of this hoof, we see a series of interlinking circles. Their connections give them an impression of curls – like a pig’s twisting tail. But my favorite hidden clue within Carousel of Pigs figures at the center. It’s a pale yellow circle with a foot and navy blue wings. The foot makes it into a letter ‘P’. So, that reminds us we’re looking at a pig painting. The wings add a bit of whimsy. We’ve all heard the phrase, when pigs fly. That puts a cliché pig concept at the core of this painting. It also made me laugh at first sight. Turns out there are lots of pigs in this artwork. Even conceptual and improbable ones.

Delaunay’s compositional care helps viewers see his vision. Color was what mattered most to him as a painter. He placed hues with profound intention. There’s no element of chance or randomness in his work. This makes Carousel of Pigs valuable on two levels. Without any analysis, it’s a prismatic explosion of swirling and colorful contrast. Carousels sweep past us in bright whirls and shiny shapes. We can make out fragments of the carousel creatures as they whiz past. Delaunay’s canvas gives us this impression and even rouses that playful carousel feeling. It sweeps us into a rhythmic swirl of fancy.

We visit a carousel in much the same way one might stop by a painting in a gallery or museum. It’s a moment in our lives that’s all about fun. Visitors have a brief but remarkable experience. There may even be an increase in heart rate, if we’re lucky. Then, quick as can be, it’s over and we’re back to the status quo. Delaunay carried me through that entire carnival ride. It’s why I love returning to Carousel of Pigs for that thrill. Hunting the hidden pigs within it feels like a second layer bonus. This masterpiece bursts with more than color. It’s the painting that keeps on giving.

Why is Robert Delaunay an important painter?

French artist Delaunay painted in a variety of styles. His artistic vision evolved a lot between the early 1900s until his death in 1941. But Delaunay stands out in art history the most as one of the Orphism art movement founders. This was a branch of Cubism. Distinguishing features include bright colors and pure abstraction. In fact, it served as a bridge between the Cubist and Abstract movements.

How does Robert Delaunay’s 1906 Carousel of Pigs compare with the 1922 version?

Only four years before painting his first Carousel of Pigs, Delaunay failed his final exams and thus decided to become a painter. This work, in 1906 sets a lovely example of his Neo-Impressionist stage of painting. You can check it out in person at the Solomon R. Guggenheim Museum in NYC.

The 1922 Carousel of Pigs was more of a tour-de-force. It’s a paragon of the Orphist movement, which Delaunay co-founded. The color contrasts and abstract swirls bridge the Cubist and Abstract art movements. So, it’s a more significant painting as well as a whimsical delight. That’s a true rarity and puts this version in the masterpiece category.

What was Orphism or Orphic Cubism?

Rooted in Cubism, Orphism was a distinct subset with exhilarating colors and rhythmic movement. Orphic paintings contrast glorious hues to give the canvas a lyrical quality. They fragmented subject matter into colorful shapes. This created more of an abstract song than a literal representation.

ENJOYED THIS Carousel of Pigs ANALYSIS?

Check out these other essays on Orphic Painters