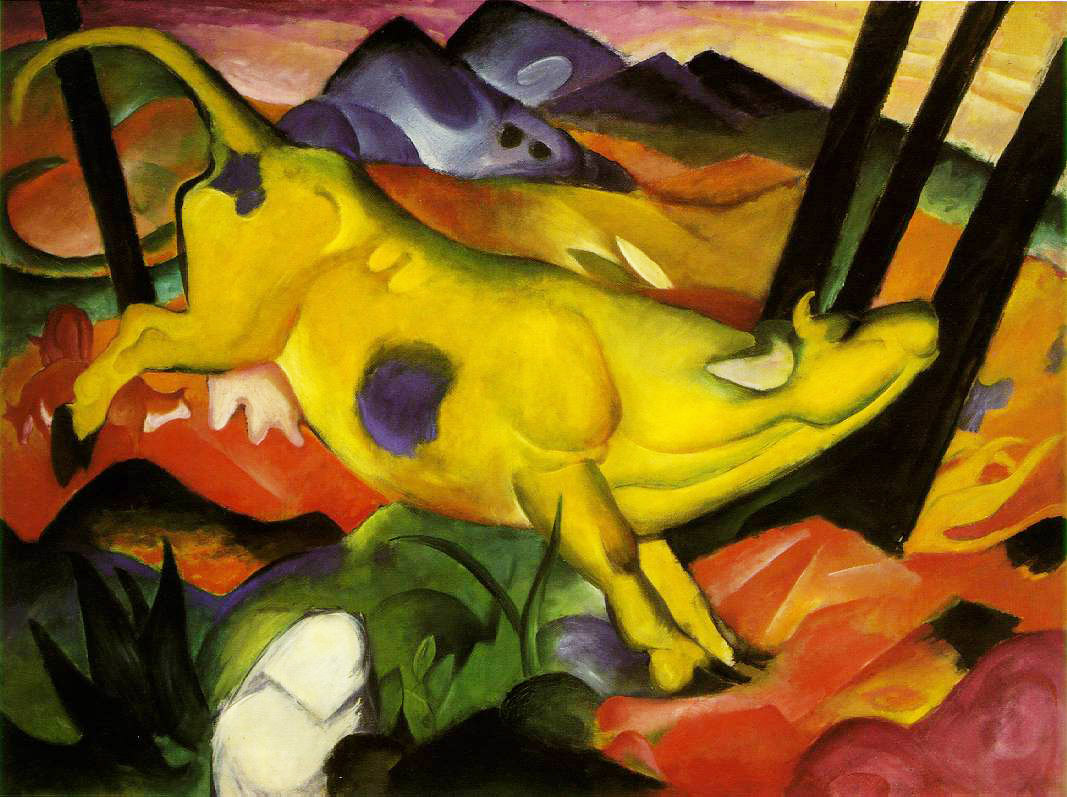 What’s so special about the Yellow Cow painting by Franz Marc?

Franz Marc painted Yellow Cow in 1911. A German Expressionist, he assigned each color a specific meaning. It was Marc’s attempt to better relay the feelings and concepts he wished to express. His color iconography has been well-documented. For instance, Marc said blue represented the male principle and spirituality. Yellow was femininity and sensuality. While red meant matter and brutality. Marc’s clear definitions make his artworks a playground of colorful essence.

He sought a coherent way to share ideas and emotions in his work. He also held animals in higher esteem than humans. So, Marc chose to paint animals. Their purity, he claimed, made them better for expressing inner truth. This was his ultimate goal. Yellow Cow gives us a striking example of how he did this. At first it may seem like just a colorful cow.

Art historian Mark Rosenthal speculated that Yellow Cow was a wedding portrait. Marc held such creatures in godlike esteem. He also painted this soon after his marriage. Given the artist’s color coding, that would mean the cow was his wife. So, this represents much more than a typical animal painting.

This may seem a less than reverent newlywed portrait. But that’s only if we apply society’s values to it. Marc adored animals with unparalleled passion. His beasts were gods; while humans took a backseat. So, this isn’t an ordinary bovine. In Marc’s world, she’s a goddess. He presents her in flight, above the red earth. Yellow Cow transcends humanity with her leap across the canvas.


This ascendant animal reflects his adoration for her. She fills the vibrant scene with bucking delight. The cow’s joyful exuberance feels like a celebration. Marc expresses this with clean lines and colorful clarity. He was a major proponent of German Expressionism. This masterpiece embodies the core essence of that art movement. It was a gateway to the free-flowing originality that followed with Abstract Expressionism.

Art historians call this group of German artists The Blue Rider (Der Blaue Reiter). I love the group’s name because it suits Marc’s system. He embedded meaning into colors. The color blue represented a male principle to him. Marc labeled blue as masculine and spiritual. The Blue Rider, all male, expressed a strong theosophy in their work. They believed portraying a subject’s essence served a higher purpose than its attributes. This would grant viewers spiritual enlightenment through art.


Yellow Cow illustrates how Marc’s system links with The Blue Rider ideals. It exudes vigor and bliss. Vivid colors and distinctive brushstrokes give viewers impressions rather than details. In Marc’s system, yellow is female and sensual. So, the cow at center represents these elements. That’s why many art historians think the cow depicts his wife. We also know she’s strong. Her figure’s sculpted with distinct muscles and not much else. She’s almost all sinewy yellow.


But Marc also punctuated her stretched form with blue bits. This color signifies maleness in his rubric. A blue patch graces both her belly and bottom. There’s also a delicate sweep across her face – like a blue kiss. These are intimate areas of the body. The belly may one day hold his baby. In a cow, the backend’s where a newborn enters the world. That gentle brush of barely-there blue on her nose is my favorite part of this painting. It’s where one might graze their lips in soft affection. Marc accentuated the fertile areas of Yellow Cow with blue. They’re the only parts of her that he imbues with this male element.

Of course, this isn’t the only blue in the painting. Marc’s mountains sit, remote and dominant, at the back. That’s the newlywed painter exerting his individuality. He may have married. But he’s still a separate person. It can be a challenge to remain independent in a tight couple. After all, marriage symbolizes a union. This gets amplified when surrounded with societal pressures to procreate.

Viewers see this in all that Yellow Cow greenery. The cow seems to perch upon a green mass. It symbolizes new life. But even more poignant, it’s also the combination color for Marc’s male and female elements. He feels the pressure too. We know that because his blue mountains are also crowded with greenery. This even reflects a bit of shadow onto his cow’s back. It’s something they share; the mountains and the cow, the man and wife. Marriage isn’t only about love, Marc reminds us. Deep partnerships reframe our lives in fresh colors and with new meaning.

Why did Franz Marc paint the Yellow Cow?

Many art references will point to the Yellow Cow‘s timing and subject matter to say it’s a wedding portrait. After all, he married in 1911, the same year he painted this. His adoration of animals also points to how the cow might represent Marc’s bride.

But there’s more to the story, of course. Franz Marc was also establishing his system of color and meaning at this point. The resonant joy and movement he evokes with Yellow Cow promoted his Expressionist ideals.

Why is Franz Marc’s Yellow Cow an important painting?

This masterpiece helped springboard the German Expressionist art movement. The painting also put Marc at its helm beside Wassily Kandinsky. That’s thanks to its distinct composition and coloration. Marc evoked a sense of elation with his leaping bovine.

The painter also had a corresponding system of color and meaning. Each hue stood for a principle. For instance, yellow was feminine and sensual. Blue meant male and spiritual, etc.

Because Marc also painted this the same year he married, many talk about it as a bridal portrait. So, it has significance in several ways. The German Expressionists valued essence above all. That means the feelings it evokes matter more than its literal subject.

Where can I see the Yellow Cow painting by Franz Marc in person?

I recommend a visit to New York’s Solomon R. Guggenheim Museum for Yellow Cow. This painting represents one of the most popular prints on the market today. It graces many of the world’s living rooms. But there’s nothing quite like standing before this original masterpiece.

At about five by six feet, it’s much bigger than most prints. Also, the tactile element of its brushwork makes the colors and figure pop for viewers. The jumping joy of this cow in real life makes for an unmatched ebullient experience.

Check out these other essays on Expressionists