How does Woman Combing Her Hair 1936 stand out as an abstract sculpture?

Cubism comes to life in 3D with Woman Combing Her Hair 1936 by Julio Gonzalez. The sculptor grew up in Barcelona with a metalworkers family. His well-developed skills with iron and steel helped him serve the Cubists’ vision. For instance, he befriended Picasso and they worked together. At the time Cubism was all about industrial materials and new techniques. So, his welding acumen helped Picasso with several sculptures. In return, Picasso also influenced Gonzalez.


Cubism forces viewers to reflect on elaborate planes in figures. Picasso’s complex Cubist paintings often have this effect. But I can’t think of a more striking example than this sculpture. Woman Combing Her Hair 1936 swoops at viewers like a bird – flying in many directions. Gonzalez injects this figure with many intricacies. Still, it’s recognizable as a female form in action. The ski jump pelvis is my favorite thing about this sculpture. It cements the sculpture’s femininity. At the same time, this extreme curve also complicates the figure.

I love its pelvic resonance. That sharp swoosh reminds me of scientists with skeletal remains. They look to the groin. A woman’s pelvis serves as the ultimate gateway. It’s the human passage to existence. So, its distinctive quality comes as no surprise. The pelvic girdle holds the key to a woman’s body. Scientists can spot her and even know her age thanks to this beautiful sweep of bone. Gonzalez gives Woman Combing Her Hair 1936 a strong, solid pelvis. It’s a formidable foundation for a powerful woman.

Women’s bodies have always been a favorite subject for artists. Art history has highlighted many women engaged in self-care. In earlier days this was a woman “at her toilet”. But the word held a different meaning then. It meant all manner of intimate activities. So, anything one might do when alone. This includes standing at a mirror, naked and putting on stockings. Combing hair remains a popular subject. That’s because it’s a private act which also twists the body in a sensual way.

Gonzalez broke with traditional figuration in Woman Combing Her Hair 1936. But another artist paved the way twenty years before. Aleksander Archipenko’s bronze Woman Combing Her Hair also celebrates cubism. It’s a luscious lady with negative space for a face. Archipenko crafted her with such clarity, we can fill in the features. Viewers know she’s gorgeous even though her face exists only in our minds. This mastery opened up a space for future Cubists, like Gonzalez, to take it further.

He took it to the slopes. Gonzalez made Woman Combing Her Hair 1936 wild. She’s combing with fierce iron slices. Metal fragments in every direction. This isn’t an everyday, casual woman. She’s ferocious. Gonzalez stabs the air with her hair combing. It’s unclear if the iron spikes are tendrils or a flamboyant comb’s teeth. Still, we know the action. This woman combs like no other. She’s a masterpiece in welded iron bars, sheets, and rods. Even with all her various pieces, Gonzalez unified her into a cohesive figure. This sculpture tells a singular, specific, story.


Gonzalez arches this woman’s anger into active art. She moves and that mere motion tells us everything about her state of mind. With this sculpture, a Cubist painting bursts into a 3D figure. This masterpiece thus brings iron fragments to vivid, furious life.

What artwork did Julio Gonzalez and Picasso create together? 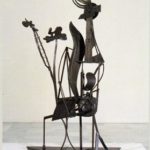 Julio Gonzalez and Picasso were prominent Spanish artists as well as close friends. They learned from each other and enhanced their skill sets. Gonzalez had grown up in a metalworker family. So, he shared expertise in welding. He assisted Picasso with works such as Woman in the Garden.

Where can I see Woman Combing Her Hair 1936 in person?

The Archipenko sculpture from 1915 set a sculptural precedent for Cubism. Thanks to the MOMA’s artful exhibit, viewers can compare it to the Woman Combing Her Hair by Gonzalez.

Even better, we can also check out Picasso’s Woman in the Garden at MOMA. Gonzalez helped Picasso weld this piece in 1929. It’s clear, looking at this along with the 1936 Gonzalez sculpture, that Picasso influenced his cohort’s work as well.

Why is Woman Combing Her Hair 1936 an important artwork?

This Julio Gonzalez sculpture didn’t get much exposure while the artist was alive. But it was a major influencer for later welded abstract sculptures. David Smith sets a primo example with Cubi XII. Smith talked about imbuing the piece with gestural elements. It also has the same unified structural sense and swirling movement of the Gonzalez masterpiece.

Check out these other essays on Sculptures.

Woman Combing Her Hair 1936 at the MOMA