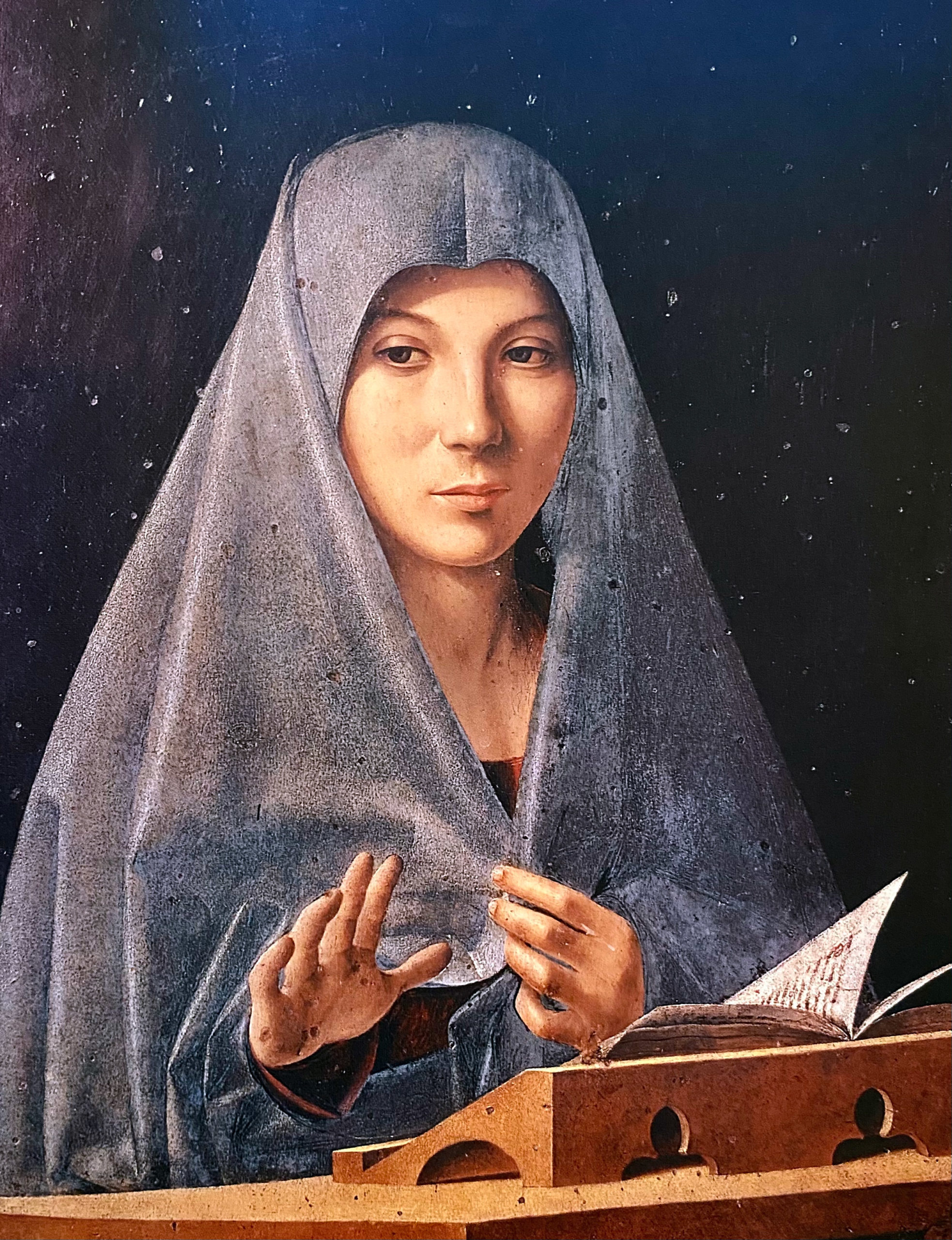 The moment captured in Virgin Annunciate relays a core Christian story. Mary, mother of Jesus, finds out she’s pregnant with God’s child. It’s often described as a moment of revelation. But Antonello Da Messina portrays the event as more of a confirmation with Mary’s face. She’s unsurprised. I love how the painter gestures her hand on our left. It seems to say, Hold on a moment – I’m reading. As if she knew this was coming. In the Bible story, Mary would be gesturing to the angel, Gabriel. That’s who visits her for the Annunciation.


Most paintings of this event include Gabriel. The angel serves as a conduit for the message that she’s chosen to mother God’s child. So, Mary will also serve as God’s conduit. Best part here is that Messina decided that Gabriel wasn’t necessary to tell us this story. Instead, we play the role of Gabriel and are face to face with Mary at this key moment. It’s a gift to us viewers. We’re in on this intimate moment and get to live inside the Bible story. The element of mystery remains. Mary’s placid demeanor keeps her detached. She looks away and registers no emotion.


This painting conveys ideas about this woman and her situation. It leaves the feelings to us. Above all else, Virgin Annunciate speaks to us of motherhood and what it meant to be a mother in the 1400s. Notice that Messina titles the painting without Mary’s name. She’s only known as the virgin. It’s as if her identity before this moment doesn’t much matter. The only thing about her worth mentioning? Virginity. After all, that’s what makes the story a miracle – and her Christianity’s most revered saint.

Viewers may discern the values of the time in Messina’s Virgin Annunciate. We know they valued virginity thanks to its heroic status in this story. Without her virginity there’s no miracle here and Mary’s like any mother. But as a virgin, Mary becomes the ultimate Mother. That’s because only God could be the Father. It’s a key element to the Annunciation Bible story. This was the New Testament’s gilding and idolizing virginity. She’s known as the Virgin Mary and Mother Mary. These are the two qualities that matter most about women in the story.

Spirit and Mind in Virgin Annunciate

When I was a child I thought her first name was Virgin and her last was Mary. I didn’t understand the virginity concept. But it was obvious that it was critical to Mary. In fact, her virginity was the only thing I ever heard about Mary – other than motherhood. This lack of information permeates the painting Virgin Annunciate as well. The background delves into a deep well of darkness. It’s behind her, which in paintings of the period often represents the past.


Her past has gone dark. The deterioration flecks from age seem like stars in a long ago night sky. Mary’s history already reads as a mystery. She’s in the moment of recognition here. It’s when Mary gets official word that she’s to become the mother of God’s child. Her future sets her apart from humanity. So, Mary’s past doesn’t much matter anymore. If we were to learn anything about her life before this moment, it would be a big deal. I remember first hearing this story and wondering Why Mary? It’s human nature to wonder what would make her so special. But we get no clues.


Messina doesn’t give us any more tips than the Bible story. Her face in Virgin Annunciate also tells us little. She’s calm and detached with a lack of emotion. This contrasts the luminous quality of the painting. The painter achieved it with his masterful use of oil, a brand new kind of paint in the 1400s. He was an innovator in oil paint techniques and introduced it to Italy. But his mastery in this method also made a significant impact on this painting. He elevates the story to a spiritual plane with the radiant quality of his colors and light. It’s important because there’s no feeling here. Messina’s portrayal of her soulful blue garment and glowing skin bring it to life.


Virgin Annunciate shows us a spiritual Mary. She seems at peace; enlightened even. There’s also an intellectual side to Mary here. We’ve interrupted her reading. It’s unclear if the pages before her are for a speech she’s giving or if Mary was studying them. That’s because it looks like she stands at a lectern. Her hands make two motions. The one on our right pulls the garment to cover her chest. It’s a modest gesture. This reminds viewers of Mary’s chastity. Her virginity is part of her humanity. It relates to her life on earth. This magnifies Mary’s absent past. The fact that she has no intimate physical history makes her extra special. It elevates her motherhood into sainthood.


Mary’s other hand, on our left, dismisses us. We are mere mortal humans; she, a saint. Messina shows us Mary’s spirit and that she’s got an active mind. It appears that she most wants to get back to her book at the moment. She’s tolerating the interruption. But Mary prefers the world of the mind to our presence. The essence of mystery in Virgin Annunciate remains, though. It leaves us wondering how Mary felt. What was it like for her to know she would bear the child of God? This son would define the rest of her life. In fact, he defines her still. We can never know who Mary was. Or what she was like. Instead, she will always be that dialectical icon of both virginity and motherhood.


Antonello Da Messina helps us see this with Virgin Annunciate. It’s the viewers who bring the emotion to the painting. That’s what makes it such a glorious experience in person. The portrait reminded me of how motherhood changes, and often obliterates female identities. Mary represents this as the iconic Christian mother. She’s an asexual, spiritual being – like an angel. This comes through in Messina’s masterpiece. At first we notice the missing angel and get a bit smug – Oh, we represent the angel. But with a bit of contemplation, it becomes clear that Mary, herself, represents the angel here.

Virgin Annunciate (Palermo) stands out as the most distinct and famous of Messina’s Virgin Marys. In many ways this version of Mary reads as the most simple. She seems to personify placid purity. It’s also the clearest portrayal of Mother Mary’s role in society. Viewers see her not as a human but as an icon. Yet she bears the humble garment and dutiful strength of the ultimate Mother. We sense her sacrifice and spirituality. She’s a saint.

In Messina’s other Virgin Mary depictions, she’s less angelic and simple. He dresses her in golden brocades and crowns her with lavish ornaments. There’s one other exception to this. In Virgin Annunciate (Munich) Mary also wears a simple blue garment. It also shows her interrupted as she reads. But the Munich Mary falls flat in comparison to the Palermo portrait. She seems afraid. More importantly, she also lacks the spiritual glow and mystery Messina brought to Virgin Annunciate (Palermo).

Where can I see Virgin Annunciate (Palermo) in person?

It should come as no surprise that this painting lives in Palermo, Italy. Art historians believe it was painted in Sicily for a private client. Later the Palermo family, Colluzio, sold this masterpiece to Cavaliere Di Giovanni. In 1906 Giovanni donated Virgin Annunciate (Palermo) to the Galleria Nazionale in Palermo. This museum is now known as Galleria Regionale della Sicilia. It graces an extraordinary collection including sculptures and the famous fresco entitled Triumph of Death (c. 1446-49).

Why is Antonello Da Messina an important painter?

Messina learned about oil painting from the Dutch painter Petrus Christus. Before his trip to the Netherlands and discovery of oils, Italians painted in tempera. That was a simple blend of egg and pure pigment. Tempera dries fast and grants a flat, opaque quality. Adding oil to paint changed the painting process as well as this quality. Oil keeps paint wet much longer. It also adds a luminescent quality to the canvas. Colors blend better and sometimes even sparkle.

Messina returned to Italy with oil paint. In many ways he thus sparked the Renaissance. He introduced the very element that imbued Renaissance artworks with glowing light and iridescent color. Check out the difference between tempera artwork and oils from this period to see for yourself. Antonello Da Messina painted masterpieces. But his greatest contribution comes down to an oily glob of paint on a Renaissance painter’s palette.

Check out these other essays on Renaissance paintings.

Pope-Hennessy, John (1966). The Portrait in the Renaissance. London: Phaidon.