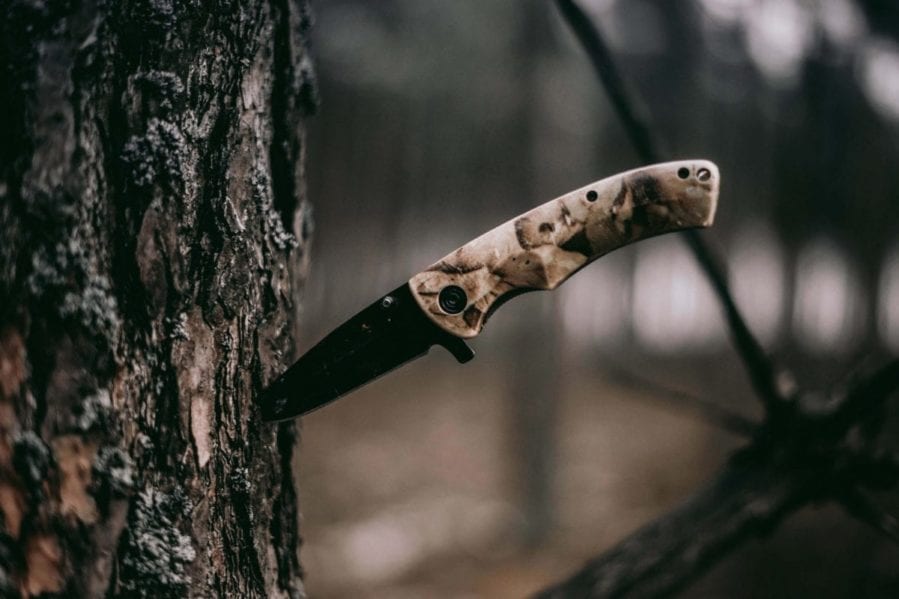 Sylvester Stallone captured our hearts with Rocky. But he gripped our balls and wouldn’t let go in his follow up hit First Blood. It enthralled me as a kid and holds me in its spell to this day.

As a prime example, the movie First Blood serves a poignant surprise. On the surface, it seems like a typical bro show. But, much like its parallel Rocky, this film’s got heart. Some movies are so packed with soul they stick with us, even if we saw them way back in childhood. In fact, such memories may be even more embedded thanks to those years. First Blood lies deep in my psyche. So, I speak from personal experience.

I saw it when I was about twelve years old – a critical phase of kid development. During my late night secret solo showtime on VHS in the den, the whole house slept, blissfully unaware. Cross-legged on the floor right, I sat in a flickering from our beat up old Sylvania. The volume on our enormous TV sat one click away from zero. Why would I risk getting in trouble to watch a Vietnam War vet flick in the middle of the night? It’s simple, a ginormous crush on Sylvester Stallone. I was in peak pre-adolescence. He was a true movie star.

The movie Rocky knocked my socks off. Then, I read an article about Stallone in Reader’s Digest. It was my favorite childhood publication. He spoke about his admiration for Leonardo da Vinci. Stallone explained that he wrote the Rocky screenplay to play that role and tell that story. In other words, he wasn’t just gorgeous. This was a humble man. He was an American artist of sorts. Stallone made things happen for himself through hard work and self reliance. I was in love.

First Blood tells the origin story of a character we all think we know, at the mere mention of his name: Rambo. That name resounds like Homer Simpson’s “Doh!” in the American unconscious. Some dumb guy with a blazing machine gun, right? Perhaps a slurring Sylvester Stallone comes to mind. But not only is his character, John Rambo, actually a brilliant strategist and tactical master with a deeply embedded inner boy scout… Turns out, John’s greatest crime is wanting a bite to eat in a small town that disdains Vietnam vets.

Check out Sylvester Stallone’s character insight. This recent video shows he’s still a thoughtful writer, actor, and all around human. First Blood not only delves into John’s PTSD. It haunts his mind and heart in every scene. Meanwhile, the story treats John like an animal. That’s because a small town police force literally hunt him… and for no good reason. This story of how war stole the soul of a seemingly primitive man, also reveals he’s a genius in disguise.

Trained as a Green Beret, John’s a war hero fighting impossible odds. In fact, he survives where no other human could. Then Rambo goes ahead and kicks ass for good measure. Brian Dennehy plays a small town sheriff with major bullying issues. He sees John Rambo, a mild man walking through his town. His take? This man must be a violent and imminent threat because he’s a Vietnam vet. The sheriff spots John’s army jacket and longish hair and thus sizes him up as such. John doesn’t leave at the sheriff’s insistence. So, Dennehy arrests him for vagrancy. This sparks a ferocious momentum. It pushes Rambo to test the limits of his infinite resolve to survive.

It becomes a matter of life and death when John escapes jailhouse humiliations. The sheriff’s men shift into hunting mode – out to kill the escapee. Rambo’s on the run in the woods of the great Northwest. From here forward the movie snowballs with such intensity it grips you and won’t let you go. The escalation draws you into a grueling intimacy with the ultimate survivalist. This proximity to his pain can make you wince. It also reveals the resilience of a man willing to do whatever it takes. That fight against impossible odds is the real gift of this movie. For example, a pre “Rambo” John stitches up his arm wound. He builds traps and slaughters wild animals. The suspense builds with each survivor tactic. All the while the relentless sheriff’s department hunters close in on him.

First Blood was Stallone’s first character of this kind. Rocky had been an underdog. Yes. John Rambo counts as an underdog too. But, it was this character that established Stallone as the iconic action hero. It’s how most of us think of Stallone these days. All that magic started with First Blood. Thus, the innate perfection of that title. This is why I love First Blood. Sure, Rambo movies have been rolling out for years like condoms on prom night. But this origin story started it all. This John Rambo’s pure. He’s untainted by marketing schemes, action figures, and polish in general. He’s raw, unfiltered and brutally pissed off in First Blood. It’s the real deal.

The Survivor Inside You Awaits

People see the name in Netflix and it says “Rambo – First Blood” so they rate it for a hollow action figure variety flick. But the only hollow element in First Blood is the soul of John Rambo – he left it behind in Vietnam. With an 87% fresh rating on Rottentomatoes, it seems safe to say that this isn’t a two star movie. In fact, it will get your blood pumping and remind you of that survivor we all hold dear and deep inside ourselves. It’s that part of you that just knows you’re going to make it out of those woods alive. It’s a perfect time for that kind of reminder these days. The hourglass empties and the clock ticks on our very planet. If nothing else, there are also great camping tips for a lady on the move.

A version of this appeared here on Fetchland.com September 30th 2015.