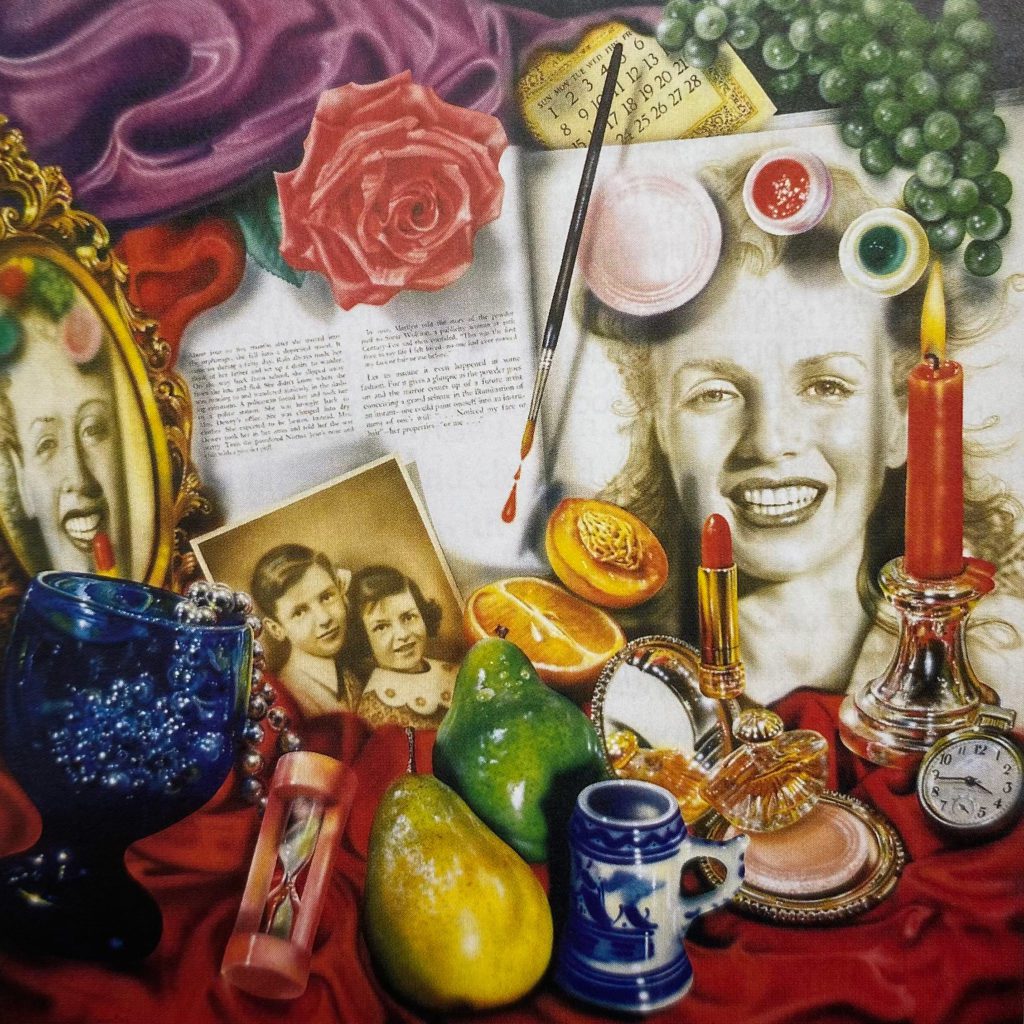 How did the 1977 painting Marilyn (Vanitas) help pioneer Superrealism/Photorealism?

If I had to pick one painting to represent the phrase “life is short”, it would be Marilyn by Audrey Flack. It’s a Superrealist shrine to Monroe the movie star. Flack pioneered this painting genre in the late 1970s. Many now call it Photorealism – these artworks use optical clarity to profound effect. Flack depicted objects in precise detail. Many of her works explore photographic concepts.

Such themes include how pictures shape our reality. Monroe’s iconic image sets a perfect example of this. The world knows her face. Audrey Flack gives us Marilyn photographs of her preoperative, brunette, natural youth. Her broad, toothy smile reads girl next door. This isn’t your typical movie star bombshell. She’s au naturale. Her hair’s pulled back to show an open expression and naked face. Where’s the bombshell we all know as Monroe?

That’s Flack’s point. This movie star is more like an image than a real woman to us. She lives in our minds as a Hollywood fantasy. We may know facts about her life and every Monroe movie role in alphabetical order. But her photos and films work more as a disguise than spotlight on her humanity. So, Audrey Flack brings the person Marilyn into focus with this painting.

Vanitas comes from the Latin word meaning futility or emptiness. This was a thematic art movement from the 16th and 17th centuries. It focused on death imagery as well as time indicators. That means items like clocks, calendars, and hourglasses. These things measure and mark time’s passage. In Marilyn’s case, time stopped early. She died so young that Monroe will always be a bombshell to us.


So, these timepieces point to Monroe’s death as much as her life. We see wry references to her unique beauty – like the pear. It parallels her perfect shape. This also refers to the traditional Vanitas paintings of yore. They often included fruit because of its short shelf life. Produce symbolized the transitory nature of mortality.


What’s my favorite symbol in this painting? That burning candle illuminates the painting’s thematic core. It alludes to the fire of Monroe’s passionate fans as well as her tempestuous loves. But even more, the candle represents time’s slow burn. Our beloved glamour girl burnt out too soon. That’s only one of the reasons she’ll never be forgotten. It’s no coincidence that Candle in the Wind became the classic Marilyn Monroe song. Elton John wrote it in 1973. Then Audrey Flack included her candle in this 1977 masterpiece.

American painter, Flack pioneered Superrealism, also known as Photorealism. This means object fidelity or “appearing real”. Marilyn the painting includes photographs and looks like one too. That’s the playful meta element in Flack’s piece. It sets us up to question the scene’s reality. First it appears to be a photo. Once viewers see it’s a painting, we wonder how it’s so true to life.

That makes the point of this kind of realism. The whole idea is to question how we perceive things. This artist constructs a specific site for us, sure. But don’t we all do that all the time too? When we set a table for dinner, that’s one way of constructing a scene. We decorate the interior of our homes. Our clothes often reflect how we wish to appear. These are all everyday constructed realities.


The movie star got trapped in her particular construction. She’s stuck for all time in that bombshell, Hollywood role. But Monroe was also a flesh and blood woman. A timeless symbol of tragic, feminine, beauty in pictures. Marilyn was also a person when the cameras stopped shooting her. I chose to do this painting now because of the Monroe quote that’s become so popular these days. It was she who once said, “If you can’t handle me at my worst, you don’t deserve me at my best”.

If anything, this quote only points to her childlike perspective on relationships. It assigns her the role of “high maintenance woman” and robs her of being a responsible adult role. After all, few want to get in deep with a partner who needs to be “handled”. That’s what children are for. Speaking of kids, Marilyn was famous for wearing five layers of signature red lipstick. This has always reminded me of how a child wears their mother’s makeup. They layer it on thick as if putting on a mask. In Monroe’s case, that was a movie star facade.


That’s why Flack’s painting feels so refreshing and honest. It’s as if she unearths Marilyn the woman beneath all the trappings. She’s the one who’s been gone much longer than the time of Monroe’s death. The painting’s timepieces illustrate more than Flack’s technical skill. They illuminate how this real woman, Marilyn, was lost to us long before the Hollywood star died.

How does Marilyn fit and not fit the Vanitas painting category?

Audrey Flack’s Superrealist Marilyn (Vanitas) painting represents a modern take on Vanitas artwork. These traditional Dutch and Flemish works of the 16th and 17th centuries were often still lifes. Symbolic of death and the ephemeral nature of life, we see a lot of skulls in these paintings. There are also many timepieces, produce, and lit candles. These all point to the swift passage of mortal time.

With Marilyn (Vanitas), Flack replaces the skull with photographs of the movie star. Then she models classic Vanitas artworks with fruit, a lit candle, and many time markers.

Why is Audrey Flack an important painter?

When the MOMA purchased an Audrey Flack, it was the first photorealist painting in their collection. That was in 1966. This shows what a pioneer Flack was. She helped springboard the Superrealist/Photorealist painting genre. She has earned many awards, medals and honorary doctorates.

Her work spanned many styles, though. For instance, she painted her Vanitas series, including the famous Marilyn piece, in the mid 1970s. Later in her career Flack found Superrealism limiting. She branched into other categories. Flack also developed quite a career even though she was self taught in the genre.

She punctuates American art history. In fact, her work exhibits in almost every U.S. state. That includes permanent collections in The Metropolitan Museum of Art, the Smithsonian, and many more esteemed museums.

Where can I see Marilyn (Vanitas) in person?

This photorealist masterpiece lives at the University of Arizona’s Museum of Art. I saw it in a traveling show, though. That was in the exhibit WACK! Art and the Feminist Revolution, organized by the Museum of Contemporary Art, Los Angeles.

I highly recommend seeing Marilyn (Vanitas) in person. That’s because it’s quite striking face to face. There’s a sense of ultra reality to it which helps viewers understand the reason behind the term Superrealism.