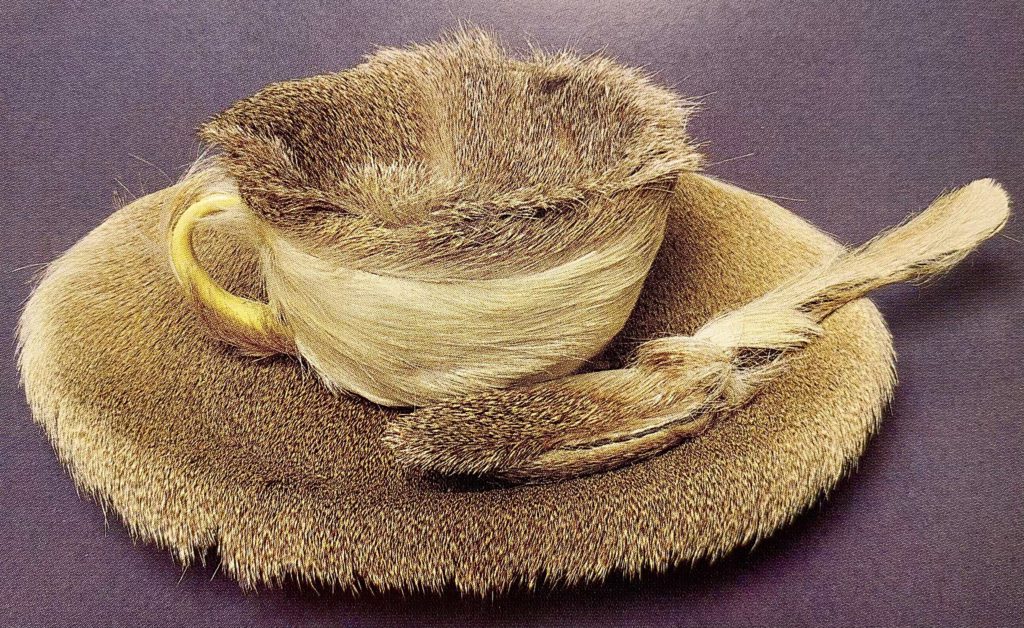 How did the sculpture Object – Luncheon in Fur impact the art world?

Object – Luncheon in Fur epitomizes Surrealist sculpture. Meret Oppenheim got inspired to make this piece over lunch. But this wasn’t just any old meal. It was with the hot and happening painter Picasso. Oppenheim wore a metal bracelet with fur lining. Picasso commented that one could cover anything in fur. So, on a whim, she joked about filling her teacup with fur. Then back at her Paris studio, Meret made it happen for real.

Oppenheim was a rarity at the time. Most Surrealists were men. Women often played a mere muse role in the 1930s art world. In fact, her friend Picasso loved to flaunt his muse collection. Women Surrealists were so rare that Meret was often called Mr. Oppenheim.

Her work Object – Luncheon in Fur excited the art world in 1936. Fur’s tactile resonance gave a household object newfound sensuality. Oppenheim exalted the everyday. Her teacup was familiar. But she made it howl. Meret gave porcelain life. So, it was more animal than cup. That’s why this piece fits into Surrealism. There’s a fine balance between the teacup and Meret’s dream-like take on it. She carried viewers into an unconscious place using familiar elements.

The Teacup That Roared

I’ll never forget the first time I saw Object – Luncheon in Fur in person. That’s because it kick-started my real understanding of Surrealism. Before this in-person experience, I knew the definition of Surrealist art. I could even differentiate it from other genres. But seeing it face to face brought it home for me. It’s about putting us on edge. Viewers can’t help but question assumptions with Surrealist works. For instance, when I first saw it I had an immediate question. Looking at the title, I wondered about this choice. Did she name it the vague “Object” because it was no longer really a teacup?

André Breton added the Luncheon in Fur part of the title. I like the piece better without it. But now it’s a permanent part of the title. This sculpture works more as an object of mystery with the original, vague title. Its wonder doesn’t end there, though. This teacup remains delicate and lovely. It still has a spoon and saucer. But one can’t drink tea from it. Object – Luncheon in Fur serves a higher purpose than tea. She elevates this practical item into an iconic work of art.

Meret Oppenheim introduced me to Surrealism with a laugh. It was instant recognition. The furry cup, saucer, and spoon showed me the heart of Surrealism without a word. Merett’s choice of Object – Luncheon in Fur as title gives no hint of meaning for good reason. It’s not needed. Viewers get the whole story from the tangible object. Fur animated it, though. So, this everyday object seems like a beast. Some art historians call this a sensual element. But I see it more as a roar.

I love the juxtaposition of Object – Luncheon in Fur. Surrealism presents mundane elements in unexpected ways. So, Oppenheim’s art fit into the Surrealist sausage party right away. Her bold work, and the buzz it made, mattered more than her gender. This piece, in particular, reaches across ages and speaks to viewers. Everyone can relate. Even though kitty cat textures and tea cups don’t go together, we know them both. Seeing them combined kicks dormant brain cells awake.

Her timing was perfect. Object – Luncheon in Fur hit the art world in 1936. It exhibited in the flagship Paris Surrealism show. André Breton organized and presented this collection of Surrealist pioneers. The exhibit then traveled to the MOMA for Fantastic Art, Dada and Surrealism. Oppenheim’s sculpture created a sensation. In fact, the Museum of Modern Art bought the piece right away. You can still see it there along with many other fantastic Surrealist artworks. Many are masterpieces. But this one’s special. It’s fresh, unexpected, and vital as ever at eighty five years old.

What did Object – Luncheon in Fur do for Meret Oppenheim’s art career?

Meret took the spotlight hard. She felt pressure rather than pure success. That’s why Oppenheim destroyed all the art she made during the decade after Object – Luncheon in Fur. In 1936 she epitomized the cutting edge Surrealist movement with this seminal work.

But it placed a heavy crown on the artist’s head. Nothing Meret created felt good enough to live up to her expectations. Still, when she re-emerged her work was ripe and relevant again. Oppenheim’s artistic hibernation served her well. More importantly, it led to an invigorated body of work to cement her legacy.

Why did André Breton add to the title Object – Luncheon in Fur?

Breton wrote the Surrealist Manifesto to kick off this cultural movement. So, he believed his expertise would improve artwork of the genre. He also added meaning to the sculpture using literary and fine-art references. With the title he refers to both Leopold Sacher-Masoch’s novel Venus in Furs and Edouard Manet’s Dejeuner sur l’herbe.

What is Meret Oppenheim known for?

This Surrealist sculptor was an iconoclast. She’s often called the First Lady of MoMA. That’s because her sculpture Object – Luncheon in Fur was the first Surrealist piece the MOMA ever bought.

Meret’s also one of the only women artists of her generation to earn international renown while alive. But there’s more to Oppenheim than her awards, fountain, roads, movie, and plaza. My favorite bit of Meret’s legacy is her quote, “Freedom is not given to you — you have to take it.”

Check out these other essays on Surrealists

See Object – Luncheon in Fur at the MOMA

“The artwork of Meret Oppenheim: A surreal legacy”. The Economist. September 3, 2013.