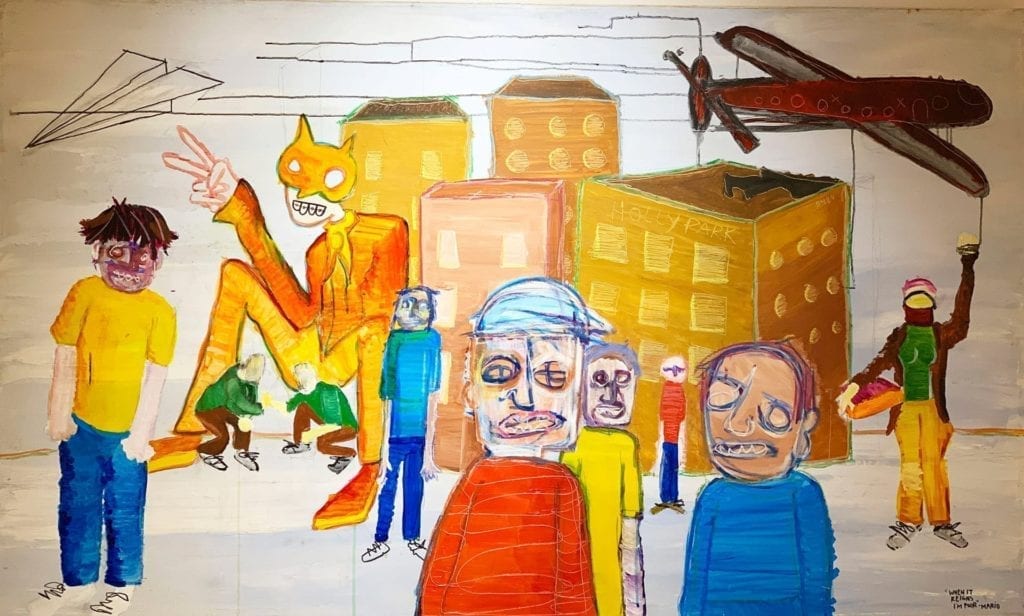 Mario Gonzales paints monsters and men. There’s little difference between them in his edgy, intriguing work. Famous for his tagline When it Reigns, I’m Poor, American painter Mario makes art that speaks to the city. He creates spectacles of energetic emotion from fury to despair. Mario does this with color blasts and quirky shapes. His work shows city life while also reflecting internal states. From social issues to wells of despair, Mario’s paintings cut deep.

He makes art from found objects, like canvases and boards. Some might describe his paintings as Street Art. Check out Mario’s Instagram to see funky examples. He’s always taking pictures of his artwork with apt spontaneity. For instance, Mario paints on street trash while waiting for a bus. He brightens the world with art, even as he’s passing through.

Mario Gonzales paints unexpected combinations to move your gaze across the canvas. He tells stories with dancing arms and monsters in braces. Mario’s stories are riveting and fun. They bring back feelings like childhood wonder. Check out the headliner painting here, Holly Park. The title – a housing project- grounds this fantastical painting. But Mario’s wiley characters speak even louder.

The left side of the painting portrays childhood’s whimsy and wildness. It shows an enormous paper airplane – the work of a child. A funky kid in braces hides behind an orange mask with a bold stance. He flashes a loose peace sign, too cool to care. Parallel to that handmade plane, the far right shows a full blown jet soaring above a woman. She plays a mothering role, bearing a box on one hip. Meanwhile her other arm’s tied to the plane. She’s bound to her traditional role as well as the past. Playful as it is, this painting works in punches too.

The monsters in the middle seem like zombies and kids at the same time. This shows the trademark brilliance of Mario Gonzales. He brings opposites together in a way that seems natural and right. It shouldn’t make sense. But now it does thanks to his painting. Kids are kinda like zombies at times. They’re in between the whimsy of youth and burdens of adulthood. The zombie years.

The painting above, entitled Holy Trinity breaks my heart. Three figures huddle together in varying degrees of sadness. Purple grief on the left quivers with despair. His mouth seems to bleed violet pain – teeth bared. Beside this sad specter stands an orange rage. You might think fury a wholly different emotion from woe. But anger works as a mask for deep sadness. Underneath all that ferocity lies grief.

Orange rage seethes. He’s scary. But deep in his gut, this guy’s headed for a breakdown. Mario Gonzales positions him as a sort of middle monster. This beast’s machismo stands in the way of his tears. It also sets him up as the perfect focal point for the painting. That furious furrowed brow knits the painting together.

Mario Gonzales portrays emptiness and loss in the figure to orange rage’s right. With a thoughtful look, one senses a skull beneath the obscuring brushstrokes. It’s as if the figure’s haunted by his own invisibility. This reminds me of how the homeless must feel. Faceless. Stripped of everything. Invisible. It’s a horrifying despair that seeps through this figure’s lack of face. My heart goes out to him the most. In the Holy Trinity this must be the ghost. He stands empty next to the angry God and his sad, sacrificial son.

Crabs in a Bucket

Mario Gonzales lives and works in New York City. This shines through work like Crabs in a Bucket. It provokes empathy from anyone who’s ridden the subway. That crammed, crowded feeling seems all too familiar for New Yorkers. The title reminds us how the rush hour packed trains aren’t filled with stillness. Riders are, in fact, like crabs in a bucket. We squirm to pull a phone or tissue from our pocket. That backpack bangs a neighbor. An elbow in the rib jolts us out of a semi-napping state. That beep and swoosh of doors opening brings our only relief.

City life isn’t always sane in these in-between places like public transport. Mario Gonzales captures this with playful details. Even if these are monsters of sorts, they’re human too. In fact, they are us. With braces and bent dancing limbs, these are relatable guys. Strangers on a subway train can be freaky too. But let’s never forget that we’re all freaks in somebody’s eyes. Crabs in a Bucket serves as a colorful reminder of this. We’re all in this bucket together, no matter what kind of weirdos we are.

Mario Gonzales shows his art at various events and galleries. As of this writing, you can see his paintings at Leez Gallery in downtown Manhattan. That’s located at 37 Trinity on the third floor.

He also features work at Kristi Cole’s event Value of Space Friday, March 27th. This art and performance event runs from 7-10pm. Enter a whole new realm of cool in Queens. Would love to see you there!