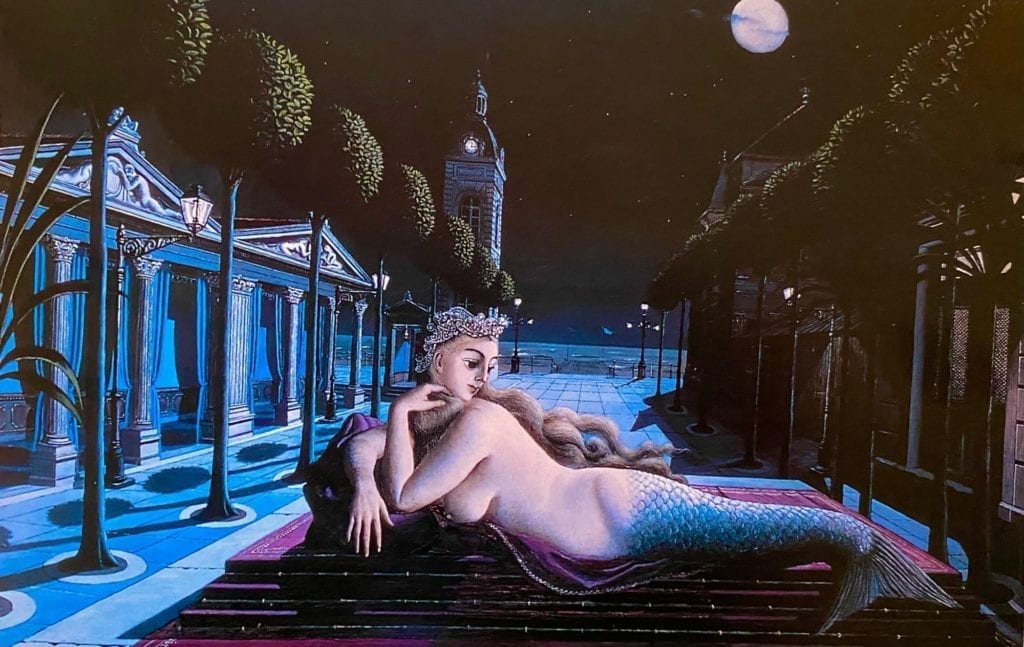 This painting, Siren in Full Moonlight, debuted in 1940, as yet another Delveux nude. Belgian painter Paul Delveux took a lot of heat for his naked sirens. But nudity’s a mere footnote to their alien features. These are not women. Does their unclothed status even matter? They appear unreal. Delveux’s mermaid lacks the warmth and tenderness of a human woman. We can’t make sexual assumptions about her. She’s a mysterious being – a siren in full moonlight – beyond sex. But Delveux’s contemporaries did assume this. They called him controversial. Because his women were nude, they were labeled obscene.

This sounds absurd. After all, nude women grace many masterpieces. They are the meat and potatoes of great art. But even today, nudity sends people into paroxysms. Instagram followers freak over a buttcheek. Bodies without clothes create controversy. It’s true in every time period. French painter Delveux, though painted about more ethereal matters. Mere bodies can’t hold his work down to earth. In fact, he used them as a means to express the mysteries beyond the physical. He portrays unfamiliar forms so that nudity becomes their least important aspect.

In this way Delveux’s work places him ahead of his time. His characters create a new place that arouses plentiful questions. He does this with mysterious settings. The lighting and shadow are only the beginning. The people also aren’t even people. Surreal elements like mermaids and looming moons tease the viewer. Some paintings tell a story. But Delveux’s set the stage instead. The storytelling’s up to you. It’s a sign of a masterpiece when a painting challenges us like this. Sometimes great artwork makes you think. Siren in Full Moonlight‘s one of those.

His work invigorates with its mysteries. That keeps it tugging at you long after seeing it. This lady seems more like a goddess. She even wears a crown. So, regal. The wonder of Delveux lies in details like these.

Prefer listening to reading? Click below for an audio version.

Siren in Full Moonlight remains mysterious on many levels. It’s not only the siren herself that makes viewers wonder. The enigma of the work also shows in the siren’s position in the painting. She poses between the lit side on the left and the mysterious, shadowy right side of the painting. The bright left symbolizes our most certain entity in life – the past. While the dim and murky right side points to the future, our greatest unknown.

Siren in Full Moonlight – A Mystery

Delveux’s mermaid graces the center of Siren in Full Moonlight. In this position, she points out that the biggest mystery of all is right now. There she sits, brazen, naked, full blown. But we still can’t truly know her. She might not even be real. Mermaids aren’t. The fantastical portraits Paul Delveux paints create another kind of present moment. They lift us out of reality. We’re taken to another place. But we’re still standing in the same moment – the right now. The painting tells us the present’s actually as much a mystery as our unknown future. We don’t know as much about our current life as we might think.

Check out these other essays on French painters.