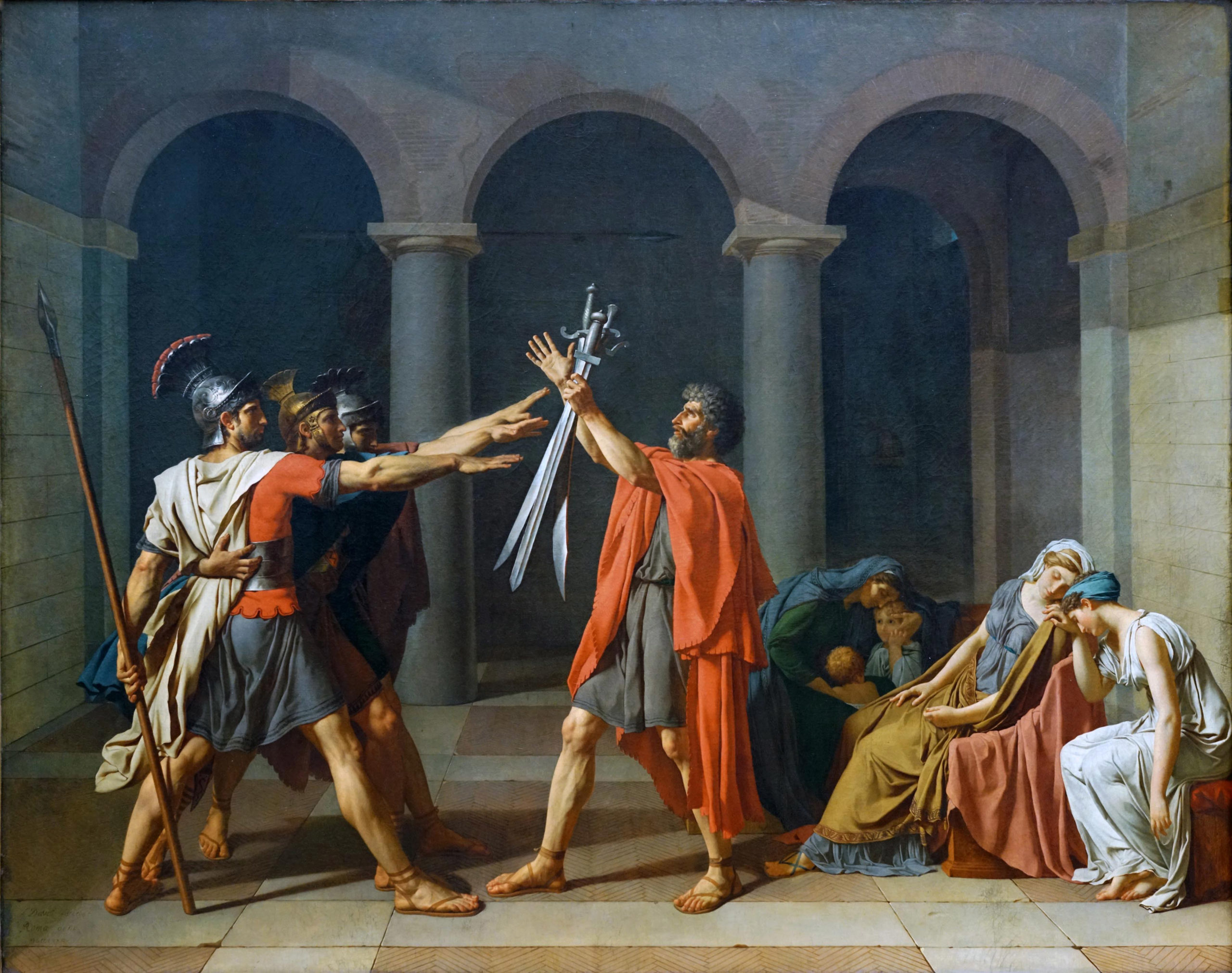 What’s the story behind the painting Oath of the Horatii by Jacques Louis David?

Like most David paintings, Oath of the Horatii blends truth and fiction. Jacques Louis David based the scene on an historical event. He also inserted a moral to the tale. This was one of his characteristic traits as a painter. Here, David presents pre-Republican Rome through his own eyes. It’s a story of battle between love and tribal fidelity. But conflict wages through several levels in the painting.

First, there are obvious signs of war – armed soldiers. Three stand at the ready. They reach for swords at the canvas center – where their father holds the blades high. These Horatius brothers prepare to fight for their city – Rome. Another trio of brothers plan to meet them in battle. They were the Curatius brothers of Alba. Although these other brothers remain off canvas, they’re present in spirit. That’s thanks to the distraught women at our right in the scene. With these weeping ladies, David reminds us of war’s wreckage.

One of the women, Camilla, was sister to these three Horatii brothers. She cried about losing them. But Camilla was also fiancé to one of the Curatius brothers. Her loss thus expands before our eyes. It’s a resplendent example of how there are no winners in war. Everybody loses. Some lose double, like Camilla. This was Jacques Louis David’s moral, in Oath of the Horatii, beautiful and tragic all at once.

There’s high drama playing out in this scene. So, the painter’s shallow, stage-like space feels right. The soldiers salute their father as they swear an oath to win, or die for their city. Their taut figures and pointed gestures sharpen the scene with suspense. The canvas quakes with a sense of urgency. War beckons with those lifted arms at the ready.

It’s such a powerful and central stance in the painting, this “Roman salute”, that the French took it on. It became popular to perform this gesture in France as David’s painting developed an audience. Still, it’s unclear that Romans actually saluted like this. All recorded history knows for certain is that Jacques Louis David kicked off a trend with Oath of the Horatii. The same fabricated gesture was adopted by the Nazis as a popular salute 150 years later.

The salute represented loyalty to one’s people at the time -1784. In fact, it’s a rather oblivious brand of fidelity. These brothers see only their swords and the battle that awaits. But high emotions to our right draw viewer eyes to the women in the painting. They weep and languish. In fact, their bodies contrast those of the soldiers. While the men raise their arms in linear, upright, unison, the women slump with drooping arms.

This postural opposition between the Horatii men and women brings us back to the title. The men make an oath here. They stand strident and sure of this pledge. It’s scary but simple sacrifice for the men. Either they win this battle or they die for Rome. Camilla Horatii also made an oath. Hers was to the other side of this imminent battle, though. She had pledged to marry one of their opponents.

Camilla was sister to these three Horatii. The trio are swearing to either kill her fiancé or die while she watches. This explains her deflated figure. Her oath offers no hope. No matter what happens, she loses at least one person she loves. The situation puts Camilla in a helpless position. That’s also opposite of her three brothers. They have choices. Part of why they stand so tall is that they are choosing to go to battle here. They hold their future in hand, as they will grasp and wield their swords. But Camilla’s future is out of her hands. She’s a puddle of fear and despair.

Jacques Louis David creates depth on this emotional side of the painting with color. The woman at this scene’s forefront wears bright white. This matches the headwrap of the next woman. In fact, these two touch heads in a comforting gesture. That points to their closeness, which seems like family. This second woman wears pale, neutral fabric in grey and taupe.

The hues deepen as our eye follows the figures back toward the painting center. In fact, the woman farthest away wears all black. She’s crouched behind the Horatii patriarch. This makes sense because it’s likely this figure represents the mother here. She wears black and crouches lowest in the scene – a symbol of war’s emotional wreckage.

Oath of the Horatii – FAQs

Was Oath of the Horatii the origin point for the Nazi salute?

Yes. Europeans knew this gesture as the “hail Caesar” salute. It was popularized by this painting about four years before revolution gripped France. That was thanks to the painting Oath of the Horatii by Jacques Louis David. The soldiers at canvas center hold their arms high in this salute. At that time it symbolized their undying loyalty to Rome. However, it was only symbolic.

When the Horatii went to battle for Rome, Caesar hadn’t yet been born. Yet, the French people who adopted this gesture knew it as the “hail Caesar” salute. Jacques Louis David created this as part of his dramatic interpretation. In fact, this isn’t David ‘s only historical concoction. Read the story behind his painting Death of Marat for an illustrative example.

Download a pdf of the book about this below, if you’re interested in reading more about this Roman salute and its history.

Who was the patron for Oath of the Horatii?

As with most of Jacques Louis David’s paintings, the monarch commissioned Oath of the Horatii. The king wanted to see what David learned during a five year study sabbatical he spent in Rome. The Louvre palace where the king lived in Paris exhibited this masterpiece in 1784. That’s also where it lives today, now that the Louvre is a museum. It was a successful commission for several reasons.

The painting accomplished the King’s political goal, elevating loyalty to one’s country. It also made David even more famous. Oath of the Horatii created a sensation. This impacted more than just the art world because the salute also became popular among the French.

Enjoyed this Oath of the Horatii analysis?

Check out these other essays relevant to Jacques Louis David artwork.