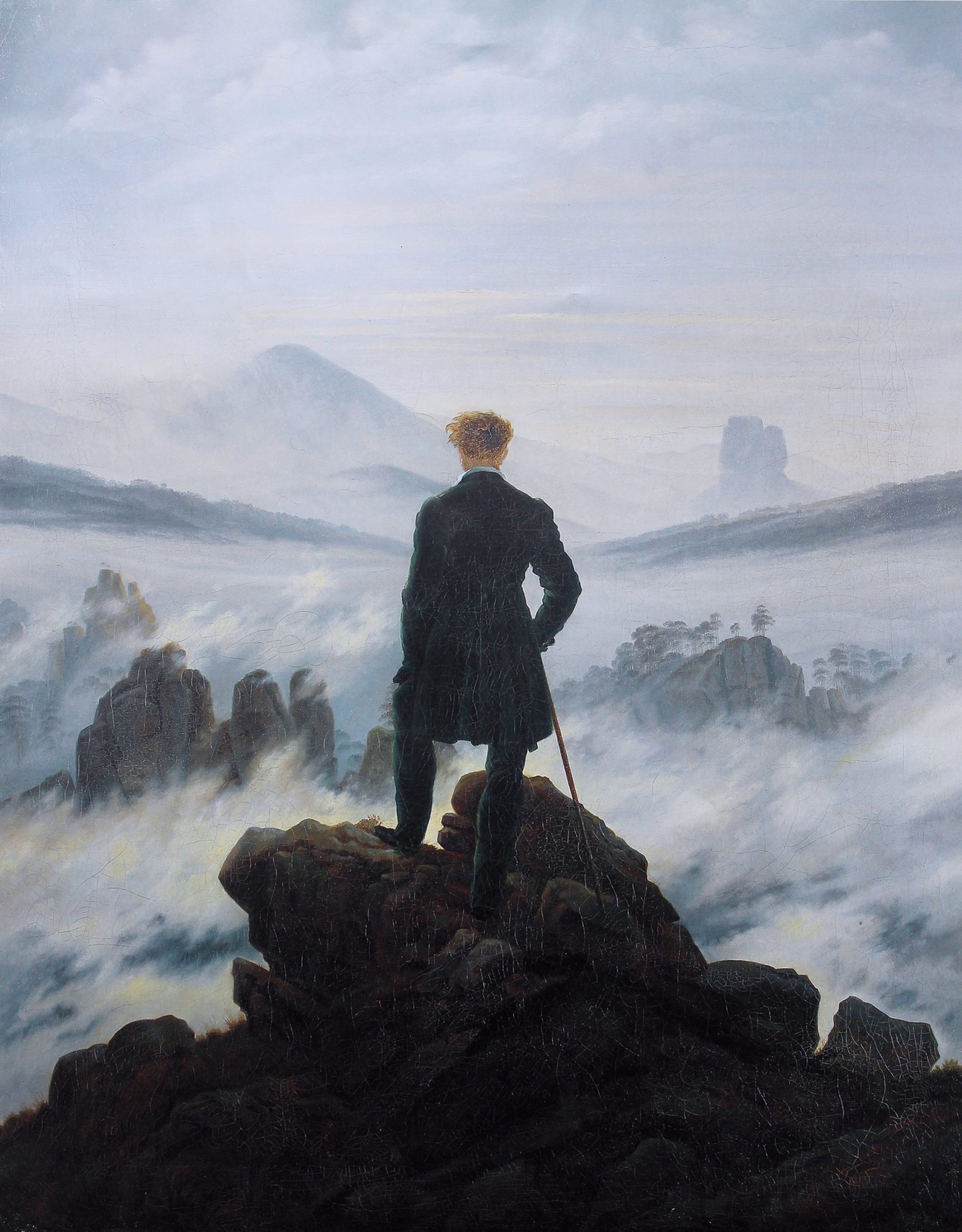 What is the meaning behind the painting Wanderer above the Sea of Fog by Caspar David Friedrich?

A man’s back becomes much more in Wanderer above the Sea of Fog. Like many of Caspar David Friedrich’s works, it combines landscape and portrait. But this one’s his masterpiece. In fact, many art historians consider it the defining work of the Romantic art movement. I agree. This painting distinguishes itself among Friedrich’s other landscape portraits in many ways.

Interplay between figure and setting reveal the most powerful part of this piece. In many Friedrich paintings the figure plays a minimal role. He tended to emphasize landscapes. But in Wanderer above the Sea of Fog we discover a sense of sublime contemplation. There’s more than a mere landscape or figure here. Together, the foggy crag and stalwart figure make magic of meditation.

Friedrich keeps the canvas simple. We see only bluffs, fog, and a man with a walking stick at the forefront. These elements feel close and clear. Friedrich blends foggy wisps into the nebulous background… both earth and sky. We know the mountains and forest loom beyond. But also that they’re not the point. That’s because of our wanderer. He wears traditional clothes and surveys the scene with a thoughtful posture. We see in his stance that the walking stick isn’t a necessity now. He’s not leaning on it. Rather, it’s a prop that represents this man’s journey.

Romantic art sprouted wings in Europe in the early 1800s. This movement revolved around intense emotion. Prevalent examples included awe and fear. Romantics often portrayed these feelings regarding nature’s beauty and the sublime. In today’s world, romance has an amorous meaning. But that wasn’t the case in 1800s Romanticism. In fact, some of the most iconic Romantic artworks focus on a single figure. Caspar David Friedrich’s painting Wanderer above the Sea of Fog sets a perfect example.

Rückenfigur works in painting as the back of a figure. We see a person from behind as they gaze into a landscape. This painting motif dates to antiquity but rose to popularity in Germany during this period. Caspar David Friedrich is the most illustrative and iconic example. His masterpiece Wanderer above the Sea of Fog serves as the most common visual archetype for Rückenfigur. In fact, if you look up Rückenfigur in most any reference, this painting will likely dominate in the results.

Mood and meaning : Wanderer above the Sea of Fog

This figure turns away from us at the moment he reaches a peak in his journey. He stands at the pinnacle of experience, gazing out to a vast horizon of mist and mystery. His garments signify the past and tradition. But he looks into the great unknown. There’s a sense of this fog swelling upward. The mist works as a physical manifestation for the heightening of emotion. His heart soars. This great surge of emotion happens without us. He turns his back to remind us that profound connection can happen within. This wanderer needs only the misty cliffs and his own mind to find bliss.

Wanderer above the Sea of Fog spotlights a landscape with a figure from behind. Friedrich accomplishes this meaning magnification with Rückenfigur. A favorite tool in his kit, there’s inherent mystery in a turned back. It raises questions about the figure’s identity. But it also forces us to focus on the setting. Many art lovers spend a long time on the figure anyway, though. They write about this wanderer a lot. Most seem to believe this works as a self portrait for Friedrich. He was a redhead, as is our wanderer. The painter also held political ideals that match the figure’s traditional garb.

These details matter to some degree, of course. Friedrich included them for a reason. But they aren’t why Wanderer above the Sea of Fog works as a masterpiece. That floating, misty fog owns the scene on both earth and sky. Friedrich imbues the painting with a sense of wonder with these wisps. The figure’s back looks a bit like a cutout set upon this luxuriant setting. It’s a reminder that whomever this man is, he’s only on the earth a short time. These foggy cliffs will remain much longer. He’s an anonymous man because this could, and will, be anyone. That exultant feeling doesn’t belong only to this one man. It’s there for all who climb these bluffs.

Friedrich captured the sense of standing among the clouds. All at once, this man feels both powerful and insignificant. The true protagonist in Wanderer above the Sea of Fog is that emotion. The mist and clouds shall drift away. This mysterious man will wander home. But the romantic crescendo of this moment lives on. Craggy rocks fill the forefront of the painting, near us viewers. That’s because we’re here on earth and not actually having this experience. The painter calls to us, though. He gives us a mission to get out there and find our own version of this delight. It’s a lonely road to enlightenment, Friedrich seems to say. But well worth the trip.

Wanderer above the Sea of Fog – FAQs

Is Wanderer above the Sea of Fog related to Frankenstein?

I recently reread Frankenstein in the original version. Shelley rewrote it and that more palatable rewrite is the one most people read these days. That was what inspired me to write about this glorious painting. If you’re interested, I recommend this Guardian article about high art references in Frankenstein.

Why is Wanderer above the Sea of Fog an important painting?

Wanderer above the Sea of Fog remains an iconic image today. This work both exemplifies the artistic Romanticism of the 1800s and serves as the best example of painting’s Rückenfigur motif (a figure facing away from the viewer in a landscape painting, drawing more attention to the scene than a standard figurative artwork).

Caspar David Friedrich painted Wanderer above the Sea of Fog in 1818. But it didn’t achieve its current status as a masterpiece until the 1970s. In fact, Friedrich felt rather unappreciated as a painter in his lifetime. He went on record with many such resentments. Luckily, his masterpiece holds our attention today much more than these cranky remarks.

Enjoyed this Wanderer above the Sea of Fog analysis?

Check out these other essays about German Paintings.

Title also translated as Wanderer above the Mist, Mountaineer in a Misty Landscape, and other variants; Der Wanderer über dem Nebelmeer in German