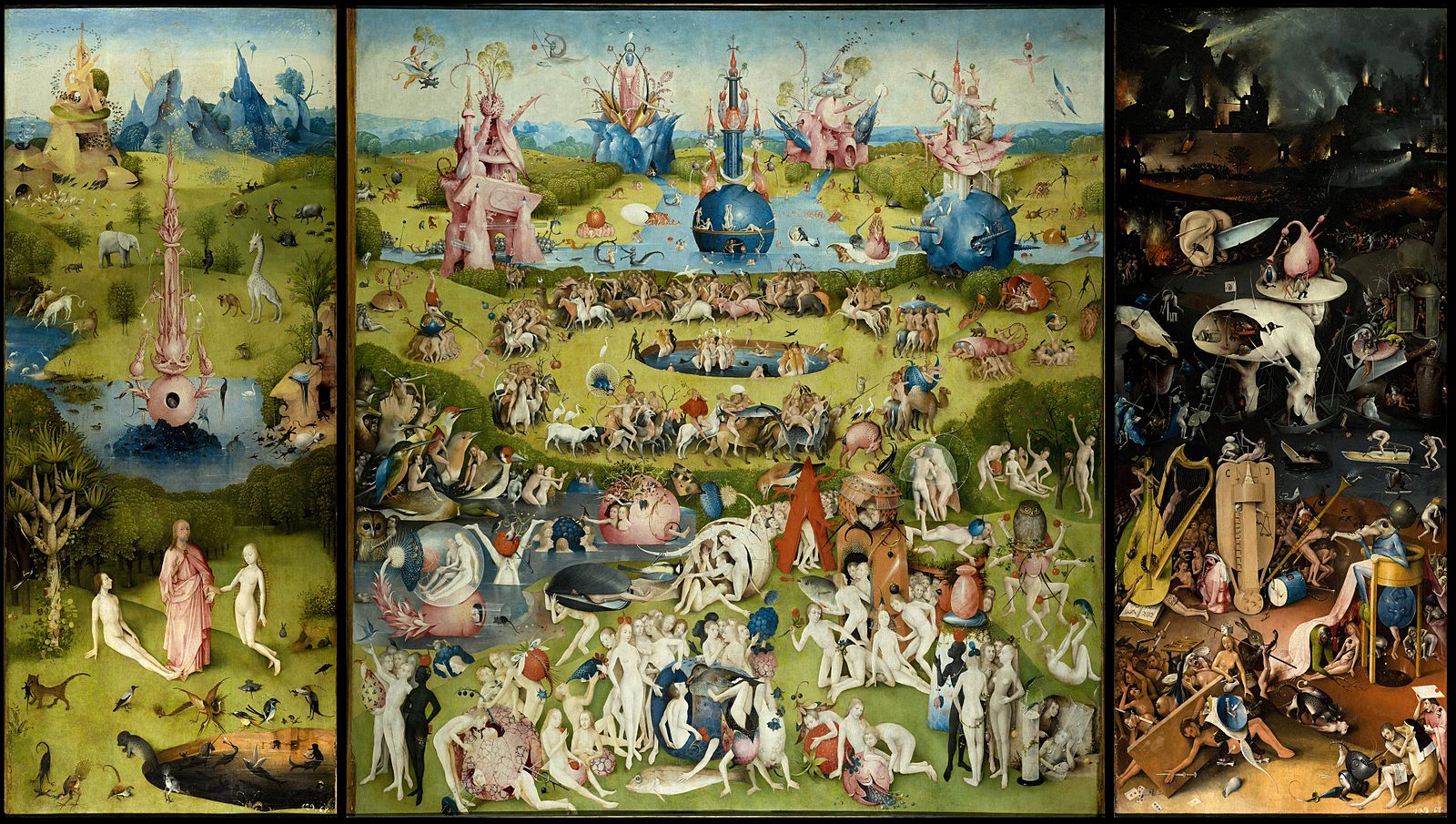 What’s the meaning behind Hieronymus Bosch’s triptych The Garden of Earthly Delights?

The Garden of Earthly Delights sets a prime example of edgy Renaissance art. Hieronymus Bosch painted this masterpiece for twenty years between 1490 and 1510. Even with all that effort, he couldn’t have known the tremendous impact this project would have. It inspires and perplexes both art historians and art lovers even today. Yet there are also fundamentals where we can all agree. For instance, this triptych tells a Christian tale. It starts on our left with humanity’s kickoff in the Garden of Eden. The middle shows life on Earth in all its indulgent wonder and excess. While the final piece on our right brings the party to an end in torturous Hell.

We can see this contrast with only a glance at the piece thanks to its color. Bosch gives Earth glorious blue skies and lush green pastures. Pale pink buildings and bone white bodies fill the space with the soft, sweet glow of people at play. If you don’t look deeper, this scene could be a candy land or at least child-safe. But with Hieronymus Bosch it’s criminal not to look deeper. He’s a master of surreal details. Also, the black background of the scene set in Hell on our right hints at the adult themes within the painting. In fact, that far right area of the triptych drains color out of the piece. There are spare hues of bile yellow, navy and pink. While the fresh and dominant green from the other two scenes has faded to gloomy grey.

That’s one of the ways Bosch tells us this scene follows death. Green represents life. So, the garden and party Earth burst with verdant paroxysms. These are life’s realms. Bosch presents death as punishment here. There’s no heaven in The Garden of Earthly Delights – only Hell. Otherwise, it’s a Christian painting. But Bosch had a more punitive outlook than the Bible. He offers humanity no redemption. Art lovers and philosophers like to debate this. Did the painter intend to portray that “life is short”? So, we should live wild and free while we have a chance? Or, we can also find opposite interpretation: One must live a moral life or else there’s only this hellish end to their story.

God’s presence also factors into this masterpiece. We see a figure representing the Almighty being in the left panel that portrays the Garden of Eden. But there’s no God present in the middle panel. This center of the painting portrays humans frolicing in free will. They’re on their own and loving every millisecond. Of course, the Garden of Eden also appears to be pleasant. It’s not elevating heart rates, though. All the excitement plays out in the middle. This triptych also folds closed. The two outer pieces work like shutters to protect the party at the center.

Bosch also portrays God on this shuttered exterior. It shows the Earth amidst creation. Foliage looms in a misty cauldron of God’s magic. Few people see this part of the piece. So, I’m including a picture of it here for reference. The small floating figure at our top left is Bosch’s God. Here he’s depicted as creator of Earth. This scene harkens to an earlier time than the interior scenes. It reminds us that the Christian God often appears lonely. His singularity, while powerful, isolated God before he created humans. This points to human narcissism. So often in our depictions of God, we need to be “the whole point” or at least necessary.

Details from The Garden of Earthly Delights

The delight lies in the details of The Garden of Earthly Delights. It’s a wonderland of human extremes. Even in the far left Garden of Eden, we see the deep longings of Adam and Eve. Adam yearns to be close to God. Bosch portrays this in the way he touches Jesus. Adam stretches his legs as far forward as he can. So, his toes touch the hem of God’s garment. Eve stands on the other side as Jesus presents her to Adam. He clasps her wrist. So, the three of them make a closed circuit with God at its center. Adam gazes at Jesus with awe in his eyes. Eve looks down. She’s dragging her feet yet still appears docile. That’s how Bosch gives her a childlike character. He highlights the innocence of the first man and woman with these naive depictions.

Many art historians disagree about this take. They believe Adam is looking at Eve with lust. Others also see Eve as presenting herself in a seductive pose. But debates are typical when it comes to The Garden of Earthly Delights. There’s little agreement about what lies within these three frames. Viewers marvel at Bosch’s extravagant love of detail and intentional manner of painting. Yet what he intended for all this to mean remains unclear. That’s what makes this painting fun. The deeper you look, the more controversial it becomes.

The middle scene teems with many people and hybrid creatures that aren’t quite human. But Bosch creates this pre-moral world without children or elders. That makes sense given that it portrays living in the moment without regard to results. Children and old age both represent consequences. He also ignores all manner of perspective in his fruit and animal depictions. Ducks dwarf humans. Strawberries match the size of human heads. It’s as if this world where people have free will makes no sense. Surreal buildings spring from the water. Couples cavort inside seashells. Bosch makes the unimaginable materialize in The Garden of Earthly Delights. So, it’s not only a 15th century masterpiece. This triptych anticipated surrealism more than 400 years ahead of time.

The seven sins give this central square color and breed scandal. Some seem innocuous. For instance, tennis ball sized cherries decorating a woman’s forehead. To our eyes today these could represent colorful accessories. But in the 1500s cherries were a symbol of pride. Of course, the fan favorite, though, is the gentleman with coins flying out of his bottom. He represents both the folly of greed and the impermanence of wealth. With this silly visual Bosch reminds us of that tried and true phrase you can’t take it with you. While the final panel on our right delivers the darker side of death.

All the excessive delights of the central panel face consequence in the last scene. Bosch sets this hellscape at night. This extreme contrast between day and night makes one thing clear – the location changed. These figures don’t have distinctive features. Bosch gives them such similarity that they seem interchangeable.

This anonymity pays off in the hell scene. The characters from the middle panel may be present in this scene as well. So, as viewers scan the painting from left to right, it tells a linear story. It starts with the ultimate Father creating humanity. That’s the introduction of Adam and Eve on the left panel. The center showcases the product of their union – flawed but beautiful humanity. They revel in free will. These people then face the consequences of their choices in the right panel. The gluttons who feasted now vomit through eternity. It’s a wretched, repellant scene. Life’s party has ended here.

Bosch leaves it up to us, just as his Christian God has given these figures free will. Viewers can decide for themselves what The Garden of Earthly Delights means. Some see it as an invitation to live fully in the moment. They choose to have fun while it lasts. Others, who take the final panel to heart, perhaps exercise more caution with afterlife consequences in mind.

The Garden of Earthly Delights – FAQs

What is the symbolism in The Garden of Earthly Delights?

Hieronymus Bosch frames the story in The Garden of Earthly Delights with Christian symbolism. The triptych masterpiece illustrates the Garden of Eden, sin on Earth, and Hell. Bosch portrays the Middle Ages most resonant fears about the transience of worldly indulgence.

He represents each of the seven sins and even some extras with both surreal and specific gravitas. For instance, in Renaissance symbolism cherries represented pride. Bosch inflates cherries to tennis ball size and accessorizes figures with them.

What made Hieronymus Bosch an important painter?

Bosch was a Dutch painter and mystery man in the early Renaissance. His life has few records. But his paintings tell vivid and unforgettable stories that are popular to this day. He portrayed surreal images within a Christian framework. Bosch’s seminal work The Garden of Earthly Delights lives in the Museo del Prado. It’s his masterpiece and is still quite famous and popular today.

This triptych highlights the fantastic features that set Bosch paintings apart. He was well known both for his intense depictions of Hell and meticulous detail. So, this incredible painting works as the ultimate example of his mastery. We can never know the man, Hieronymus Bosch. But his oil-on-wood wild imaginings keep us guessing about him through the ages.

ENJOYED THIS The Garden of Earthly Delights ANALYSIS?

Check out these other essays on Dutch Paintings.

Strickland, D. H., The Epiphany of Hieronymys Bosch. Imagining Antichrist and Others from the Middle Ages to the Reformation (Studies in Medieval and Early Renaissance Art History), Turnhout: Harvey Miller, 2016,