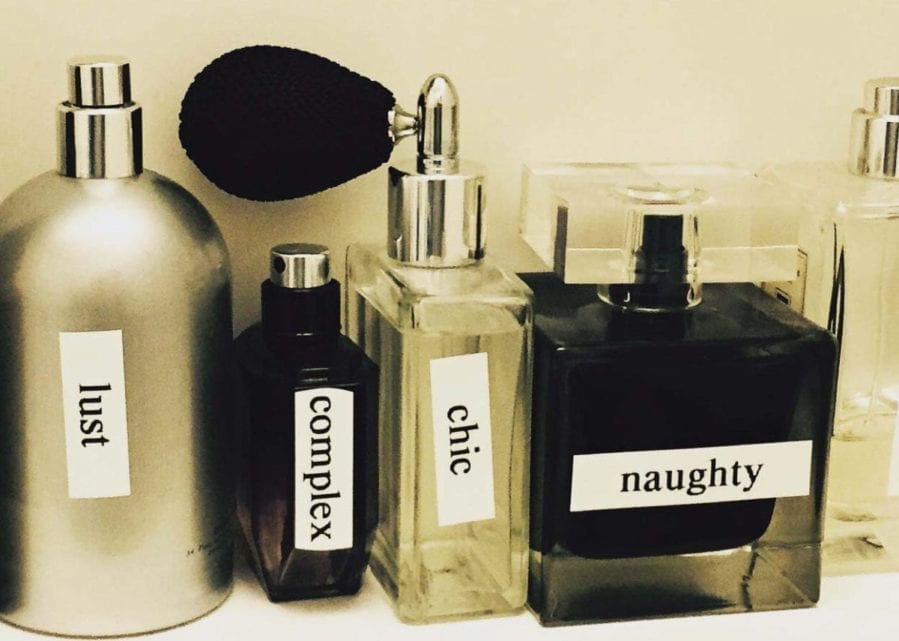 Order and Organization are more than control keys. To create order and organize chaos offers solace through agency. Angry? Overwhelmed? Lonely? Helpless? We all feel these things. I figure out what I actually CAN control, then take charge big time. Organization works for a simpler, easier life. Order comforts me. How do I do it? Lots of ways. But I love making colorful creative maps, calendars and systems.

The Emotional Truth of Fragrance

Scents are a sensual form of music. They’re tonal, emotive and inexplicable. Emotive how? For instance, there’s a particular version of Michael Kors that hits me like a stray bullet. I’ll be walking down a sidewalk, humming and bopping to a silly song when some lovely floats past in a cloud of Michael Kors and WHAM! I’m gagging.

That’s because about twenty years ago I lived with a guy who quit his job so I could pay all our rent myself. Hey, thanks, bro. Thereafter he stayed home all day, gained forty pounds of pure lard on his belly, and became a nudist. The guy then stole the $5K I’d saved for a down payment on my own apartment. It’s times like that when you find out who your real friends are… and if you’re lucky, your rich friends too. In summation, that guy also gave me a bottle of Michael Kors perfume. Not your fault, Mr. Kors but the smell of it literally sickens me.

Luckily this rarely happens. This particular version of Michael Kors is old school and most women threw away their bottles a long time ago. I only mention this to illustrate the power of fragrance. It’s mighty. Music holds us under a similar spell. The essence of a scent or song takes you to another place, an emotional well.

Order Up Your Memories in a Bottle

That’s why I’ve organized my fragrance cabinet by emotional tenor. It’s how I’m feeling (or want to feel) that matters when I’m choosing one.  I create order and organize chaos this way. For instance, I love Comfort before bed at night. The smell of it soothes me. It’s the simple drugstore brand Anais Anais and brings me back to childhood. That’s because I used to sneak into my older sister’s bedroom and steal a squirt once in awhile. It made me feel close to her. She was a decade older and caught up in high school dating drama. So, let’s just chalk it up to a desperate attempt at connection with my singular source of social inspiration. But now? Now the scent lulls me to perfect sleep like the softest, snuggliest hammock aside a Hawaiian sunset.

The ad above captures the mood of this particular fragrance. You feel caught in a fairy’s dream. Nothing raw, sexual, or even slightly adult about it. Anais Anais is the Trix of fragrances. It’s for the kid in you. That’s not to say the scent’s overly sweet. Not at all. But it’s certainly wistful for a simpler time. In fact, Anais Anais recently celebrated a 40 year anniversary. So, that’s well-earned nostalgia. Memory places a crucial role in scent. Smells take us back like fragrance trains following a map to our past lives.

Just as maps help us make sense of space and time. Systems can help us create order and organize chaos in everyday objects. I find this eases daily life. For instance, keeping things in their place makes the morning routine that much more fluid. It’s all right where it’s supposed to be. Sure, there’s not a lot of excitement in that particular hustle. But I’m not stabbing myself in the eye with a mascara/frustration combo either.

A lot of people attempt to create order and organize chaos these days. But it’s truly not necessary to throw it all out. You can achieve that same level of peace and simplicity in your place with mere organization. Best part is, it’s all up to you how you want to do it. Go minimal or go maximal. Either way, the payoff is pure solace.

For example, I find create systems with color and calendars like this one above. This practice serves my control freak. It feeds her ravenous core. Sometimes just the process of making these monthlies comforts me. I’ve got a plan solidified. It’s how I create order and organize my chaos. Even though it’s just one aspect of my life, work in this case, I love having that particular piece mentally settled. It’s my favorite exercise of mental agency – order and creativity serves my plan to ease my mind.