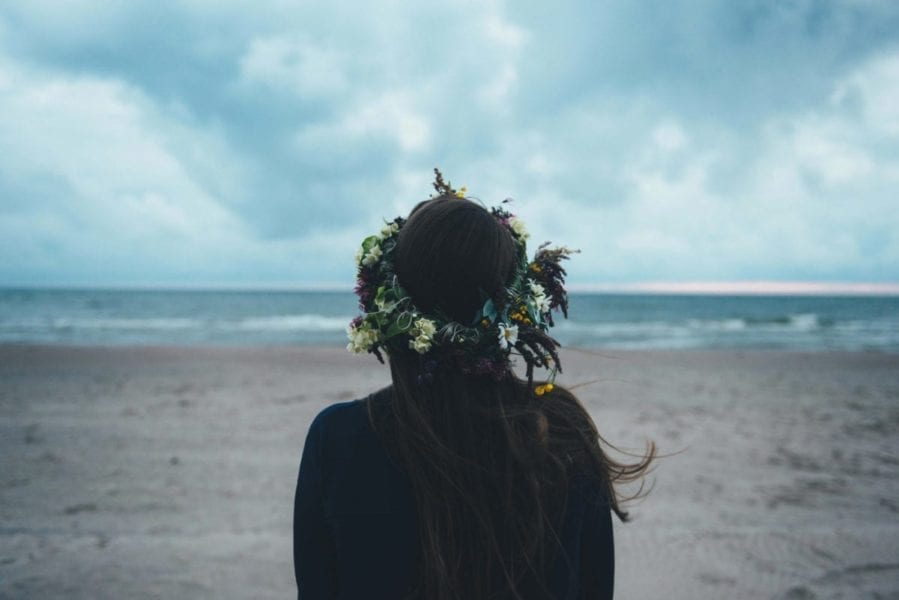 How a Lyrical Fairy Goddess Revived a Dead Heart in Brooklyn. On her How Beautiful tour Florence Welch opened her glorious heart. She shared her bountiful soul to fans and fools like me at Barclay Stadium. We danced, hugged strangers, and sang our deepest aches and pains away.

Kick Back with Florence Welch

I get out to see live music whenever I can. It makes me feel a part of something bigger than myself. One gets swept into a new world created by an onstage icon. It’s happening right there in the moment. Even the same concert on the same stage the very next night won’t be quite the same as THIS. It’s only going to happen this way once. It’s spectacular because of this spontaneity. You can’t get the same feeling rocking your stereo full blast. Not even if you light every candle in your apartment. Though, my next door neighbor seems determined to try…

Amazing Florence Welch IS a Machine

I went to see Florence Welch & the Machine at Barclay Center in the summer of 2016. At the time I wasn’t a Florence fan. In fact, I only knew her songs from background listening. You know, elevators, Anthropologie, and waiting rooms. These types of tunes are always playing there. I liked her music but I’d never experienced it fully. Not live. But once I did it changed me forever. That’s one of the reasons I wrote this particular piece in second person, as if you are experiencing it. I had to share the love.

Florence Welch – The How Beautiful Tour

Ever felt like not feeling? Like numbness is the answer? Sometimes the world blasts you. Crazy cannons of hate, violence, and senseless mayhem careen. It seems at times like these that hearts are only for pumping blood to and fro. But then you find yourself in line with thousands of other dead-eyed, hopeless humans. It’s June 15, 2016 outside Barclays Center in Brooklyn. We’re waiting to see Florence Welch.

Murmurs fill the empty air around you. I need this tonight. She makes me feel better. “Finally, finally I can relax and have a good time.” You realize it sounds like they’re talking about love. This gives you the tiniest thrill. You look up from your phone for a second. Your reflection stands in line – mirrored in the black Barclay Center’s glass doors. It looks as if you might need this too.

The empty stadium feels sterile and vast. It’s a pre-prom decorations gymnasium. But soon it’ll be teaming with dead-eyed fun-seekers like yourself. So, you take a place right up front by the stage. It was the smartest choice you made for this venture, buying a General Admission ticket. The best way to get the whole experience of the show is to dance. Fun people fill the floor. Bored folks sit like lumps in stodgy seats above.

Everyone’s in a pair except for a needy third wheel nearby. She’s number three in a trio with two hot guys. Her role? Trotting beer up and down those cement stadium steps. She fetches for cute boys who whisper only in each other’s ears. You wink at her and she half smiles back. It’s your first victory of the night. A pulse almost starts to hum at your wrist.

Grimes is avant garde. She completely controls her sound. Thus her uniqueness. Grimes got started fiddling around with GarageBand. She found her way to MySpace. Even when Grimes put her music out in the wide world she remained innocent and untouched. This video Flesh Without Blood illustrates her vision. She’s a marvel.

A youngling. Her stage act is Grimes, synthesizers, cool dancers, and a bone to pick with every damn thing. That’s what you love about her the most, she’s mad as hell and not gonna take it anymore; one song at a time. Even her happiest songs talk of death. She sings of apocalyptic events. But this may be a natural outcropping of anyone who reads the news these days. You’re not sure… but you love that Grimes isn’t numb to it like you are.

She’s got loads to say and owns the stage like a pro. Her dancers spin and float. The stadium pounds out the sound in throbbing waves. They flow through the soles of your shoes and deep into your veins. Grimes belts out forty minutes of fire. You jump and sing her irresistible mixes.

You smile – alive. That heart you’d been ignoring for so long is pumping like crazy. Grimes tears the stadium walls down. Seats begin to fill with eager faces, many wearing flower crowns.

Ordinarily you’d think these are a tad ridiculous. But Grimes has turned on your heart-light. They seem whimsical and fitting for the evening. The truth of how befitting they are resounds when Florence Welch takes the stage. She’s a flowy enchantress reminiscent of Stevie Nicks but somehow also completely of-the-moment.

Before tonight your only real experience of Florence Welch and the Machine was limited to her two most popular songs — “Dogs Days are Over” and “Ship to Wreck” — which are lovely, but it’s getting late… so, you consider leaving. I mean, you’re not the biggest fan and gotta get up early in the morning. But fact is, you’re already here and super close to the stage to boot. Why not have some fun and see what happens? Some of the best nights of your life have followed that question. So, you stay.

You take a look around the stadium, surrounded by thousands of true believers. Magic’s about to happen; that much is clear. Because it turns out Florence Welch is a magician and everyone in the room already knows this. Everyone but you, grasshopper. But as soon as this goddess takes the stage you know it too. Florence masters the entire stadium when she floats out to grace you with her artistry. Nobody can look away. Immediately, she owns every ounce of your attention and, in a matter of moments, all your affection too.

Her songs reach deep inside you. They render a rich, strong voice and lyrics that it feels like a haven; a place you’ve always belonged. These are your people. This is your home. You’re swept into the music and wish you knew all the lyrics to sing along with the thousands that surround you. Many times you find yourself singing anyway. You’re wrong about the words. You don’t care; it feels so right. A lot of the songs are about love and Florence talks about it too. She tells a story about writing the title song. It’s from her new album “How Big, How Blue, How Beautiful”. Welch wrote it on a plane while falling in love. It was the kind of love, she explains, that makes you fall in love with everyone.

Sometimes love can be so overwhelming. It can bleed into everything. Suddenly because of the music and the thousands around, you know exactly what she means. In fact, this is how you feel right now. You’re enveloped by men and women who have their arms outstretched. They reach toward Florence Welch with tears streaming down their cheeks. It’s a freaking love-fest in here and about to get even more so. You look away from the stage for a moment and see the audience feeling the affection. The third wheel gets into it even though her hot guys are now full on making out, lost in their own world.

Florence and the Machine draw from all three of their albums. There’s a range of passion and particulars so familiar and perfect you can’t help but dance. Thoughts play in your mind. Ideas arise out of moving and insightful lyrics. You even fit in a bit of therapeutic success overcoming heartbreaks from the days of yore. But that selfish lapse passes when Florence trails a rainbow flag back and forth across the stage. She’s singing “Spectrum” from her album Ceremonials. The song’s refrain says:

This creates a rousing anthem for “Love is Love”. She chants it right after the song. Barclays stadium sings with her. There’s a shared feeling of unity and community.

Florence reminds you that there’s only one way to overcome hatred and that’s to overwhelm it with love. “You all are capable of such giving,” she says. You agree because of how she made you feel tonight. “Now you have to go out there into the world and outnumber the haters with your love”. The only way to do this is to love as much and as many as possible to save this world. You have to take all that love you’re holding inside and give it away one person at a time, creating a chain reaction. “Let’s start right here and right now,” she adds.

Then Florence Welch directs everyone in the stadium to hug each other. “Every single one of us needs to share our love right now,” she declares. It’s an easy task for pretty much everybody in attendance, except of course, you and the third wheel. As everyone else pairs off with tight hugs throughout the stadium, you eye each other. Then you outstretch your arms and she does too. After the embrace, while pulling apart, you both smile. It’s a miracle, what Florence did here. She created spontaneous affection between strangers.

A true artist, songs aren’t her only form of magic at this enchanting show. Effortless Florence Welch floated across the stage. She enraptured you. Her power inspired you all evening. Leaving Barclay Center, you’re overcome with emotion and admiration. Your heart has never felt so certain and strong. On the train ride home you search Florence Welch and The Machine on Apple Music. A tiny white-haired lady nearby links arms with her husband and says, “Florence sang the shit out that stadium tonight, honey”. It’s so true, you can’t wait to get home and blast your walls to bits with that very voice. First song on tap? “Third Eye”.

An alternate version of this article appeared here on Fetchland.com June 16, 2016.