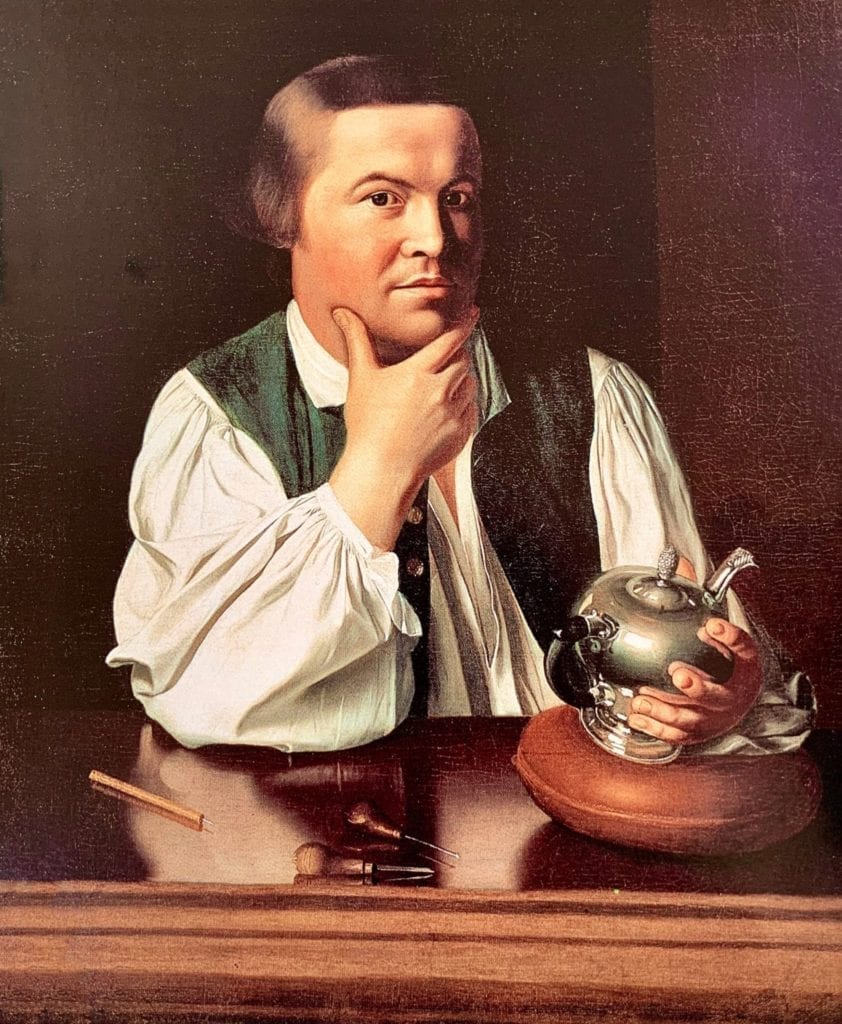 Why Paul Revere the painting by John Singleton Copley matters:

Copley was a beloved American artist when he painted Revere in this 1768 portrait. It was a standout portrayal, though, and quite unlike his other works. That’s because Copley wished to remain neutral about politics when that was impossible. America teetered on the edge of revolution. Paul Revere was an intense and articulate Son of Liberty. He supported the colonies 100%. But Copley, engaged to a hardcore Tory, wished to abstain from political discourse.

Lucky for us, this portrait captures that moment in time. It’s a confrontation between Revere’s principles and Copley’s austere portrayal. This shines through details in the piece. For instance, men were always depicted in suit jackets during this period. But Paul Revere wears a blousy shirt and vest. It’s not a fashion statement, though. It’s political. In 1768 King George had made it illegal to produce linen in the Colonies. All fabric had to be imported from England. So, this was a rebellious act – wearing a shirt made from colonial linen.

The way Paul Revere brandishes his right sleeve in the portrait points to his bold character. He knows he’s making a statement and cradles his chin. That’s to tell the painter and viewer think about this. To him, the sleeve represents King George’s unjust control over the colonies. Boston’s linen producers made about 125 yards of defiant linen in 1768. Wearing it was a clear political statement.

This swath of white fabric balances with the shiny silver teapot in Paul Revere’s other hand. Bright glints of light on the metal draw the eye across the painting. This movement from sleeve to teapot seems deliberate. It’s as if John Singleton Copley wants the viewer to shift their attention. Part of this is typical artist practice. Art means to move us. That means our eyes too. But there’s likely more to Copley’s portrayal here. After all, tea was political then too.

Why Paul Revere Holds a Teapot

Tea was the hot topic of 1768. Whigs like Paul Revere never drank tea. It was a British beverage. Only Tories drank it at the time. Boston tea, a form of punch, was the only acceptable Whig version of tea. And it wasn’t tea at all. The Boston Tea Party didn’t happen until December 16, 1773. But tea was already a burning issue. In fact, it was all in the family for Copley. His fiancé, Susannah Farnum Clarke was daughter to Boston tea merchant Richard Clarke. He was a high ranking commissioner of British interests – the ultimate Tory.

This gives Paul Revere’s silver teapot a profound glimmer. Was Copley using it to balance the painting’s Whig blouse with a Tory teapot? Or did Revere wish to spotlight his silversmith talents? The way Paul Revere holds the pot, firm and strong, shows control. His solid forbearance has a thoughtful expression behind it. This is a secure man of integrity. Revere believes that the truth will bear out for him and his people. It shows in his eyes and the way he holds the teapot.

Copley’s painting stands as emblem to that time right before America became a real place. Independence was a mere idea in the minds of men and women. But the promise of liberty from British rule held them rapt in the dream of a richer life. At the time of this portrait Paul Revere hoped to create that better life in the colonies. Copley, though, had a different fantasy. He was romantic in the more literal sense. Love would carry him across the sea and back to England with his Tory wife.

This portrait remains in Boston and bursts with pure Americana. Copley placed his teeny almost imperceptible signature at the bottom. But that’s all remaining of his Tory influence. The teapot now signifies Paul Revere’s hardscrabble colonial craftsmanship. It’s a portrait of liberty’s original face. The man Paul Revere symbolizes all men who desire freedom from tyranny. They face their foes without fear; ready to fight for their rights… and yours.

Why was John Singleton Copley important?

Copley was a celebrated colonial painter. He was famous for his portraits of important New England people in the mid 1700s. But the artist left fame behind when he moved to England. He faded into obscurity, leaving only early American works, such as Paul Revere, as his legacy.

Where can I see this Paul Revere portrait in person?

John Singleton Copley’s portrait Paul Revere lives in the permanent collection at The Museum of Fine Arts Boston. It’s an easy find if you’re walking along the Avenue of the Arts. Best part is that once inside, the artwork’s a pure delight. Masterworks from Georgia O’Keefe, John Singer Sargent, and El Greco are only a sampling of the wonders included.

What did Paul Revere do or say that was historic?

Silversmith Paul Revere served as an ardent Son of Liberty in the American Revolution. When the British invaded on April 18th of 1776, he played a critical role. As Principal Rider for Boston’s Safety Committee, Revere created a lantern security system. These lights warned colonial minutemen that the British were coming. Paul Revere didn’t actually SAY these famous words. But he did light the way.

Paul Revere collected intel from local Bostonians with British connections. He knew when the British would attack. But for the details of how, he had them light signal lanterns. One light for land and two for sea. The lantern light then kicked off Revere’s ride to warn the militia of where they’d hit. Thanks to Henry Wadsworth Longfellow‘s poem about this, the tale stays vital. It’s a familiar piece in America’s beloved quilt of origin stories.