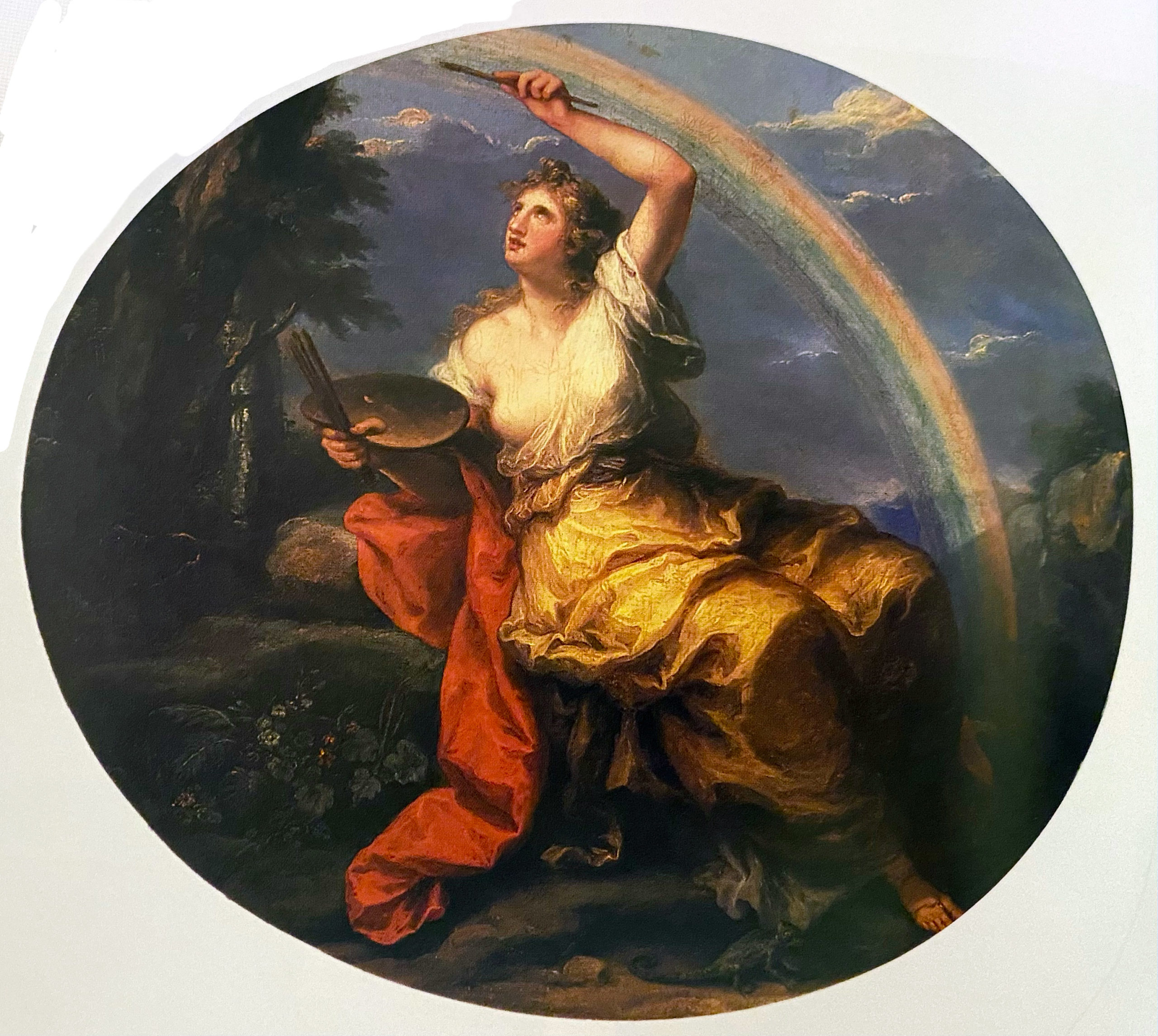 The Swiss painter Angelica Kauffman created her self portrait Colors as part of a series for the Royal Academy of Arts in London. Kauffman was one of two women who founded the Academy. Her four part series on crucial elements of painting still graces that art institution today. This one sets the best example of her allegorical personification for teaching purposes. These four oval paintings grace the Academy’s lecture room ceiling. Kauffman’s quartet serve as reminders of fundamental principles but aren’t too academic. They’re accessible without seeming wholly real.

Kauffman bares herself to us in her self portrait Colors. It’s portrayed as a nonchalant exposure, accidental from reaching into the sky. But Kauffman painted it this way with purpose. She’s revealing an intimate part of herself to remind us of a few things. First of all, artists dig deep and explore vulnerabilities in their artwork. Sometimes art can even expose those private parts so they’re not secret anymore.

Kauffman may have shown her breast to highlight her womanhood as well. Breasts are a distinguishing female characteristic and her femininity set Angelica apart. She and the aforementioned female cofounder remained the only women at the Royal Academy of Arts, London until 1975. That might seem like no big deal until you realize that they founded the academy in the mid 1700s. So, it was two hundred years before another woman joined those hallowed halls.

The Royal Academy of Arts commissioned this series from Angelica Kauffman to explore themes of design, composition, and the genius of invention. Along with her self portrait Colors, these are meant to cover the essential elements of painting. Kauffman was a master of all four and included all four themes in all four paintings. What I love most is how she highlighted each key theme in each allegorical self portrait. Imagine if you had the task of portraying colors as a lesson to art students. That’s how I see this masterpiece: it aces the assignment.

Angelica dresses herself in neutrals, cream and beige rather than rainbow colors. This draws our eyes above her to the rainbow. Thanks to her artful composition, Kauffman’s bent arm painting the arch of colors also focuses viewer attention on this. After all, the rainbow plays the protagonist role in the portrait Colors. Other than the scarlet cloth draped below Angelica’s palette and the muddy blue sky, it’s the main source of color.

Kauffman gives the natural phenomenon of a rainbow the primary attention because that’s what painters do. They give life to nature through art. A rainbow works like nature’s color buffet. So, she’s reminding us of how crucial the natural world is to painting. Angelica also portrays a naturalistic rainbow in a surreal setting. Painters can’t actually create a real rainbow with brushstrokes to the sky. So, she makes the unreal feel natural while also showing the inherent power of art to construct a new reality.

That’s why Kauffman drapes a brilliant red swath of silk at her palette. It signifies the fire of her inventive genius. Also, this red stuns with such a vivid tone that we’re reminded it’s man made cloth. Even if silkworms wove the garment, a human gave it this brilliant color. This figures into the simple and effective design of the portrait Colors. Angelica creates movement with her body’s sideways posture and upward gaze. She holds a dark palette but paints a pale arc of transparent colors.

We can see the far away mountains through the rainbow, just as we glimpse her breasts through her gauzy blouse. It takes skill and thoughtful technique to create this keen sense of transparency with oil on canvas. She’s a sort of magician, which we also see in the empty palette. Where do these rainbow colors originate if not from her palette? The artist takes on a role like the creator with this magic.

Kauffman echoes the oval frame with her bent arm, turned body, and rainbow. It’s all part of her grand design. The painter created a moving masterpiece where she’s the central figure, the creator, and yet somehow also not the key ingredient. Angelica shows profound humility while also running the show in this painting. Her power resonates throughout the piece but it also takes a backseat to the overarching glory of nature, represented by the rainbow – a crown atop this masterpiece of colors.

Are there other titles for Angelica Kauffman’s Portrait Colors painting?

Yes. Because this painting lives in England, at the Royal Academy of Arts in London, it also holds the title Colours and sometimes Colouring. This oval self portrait works as an allegorical personification of color as an element of painting.

Kauffman did a series of four oval paintings for the Royal Academy of Arts to represent the key elements of painting as an art. The other essential elements were Design, Composition, and Invention.

Why was Angelica Kauffman an important painter?

She was a powerful force at the Academy as both a painter and influencer. Many of her works grace the Academy to this day including a series on the ceiling that represent the essential elements of Art. Kauffman painted these at the Academy’s request and portrayed herself as an allegorical personification of each theme.

Enjoyed this analysis of Portrait Colors

Check out these LadyKflo essays on women painters.

Learn more about Portrait Colors and Angelica Kauffman at the Royal Academy of Art, London website.