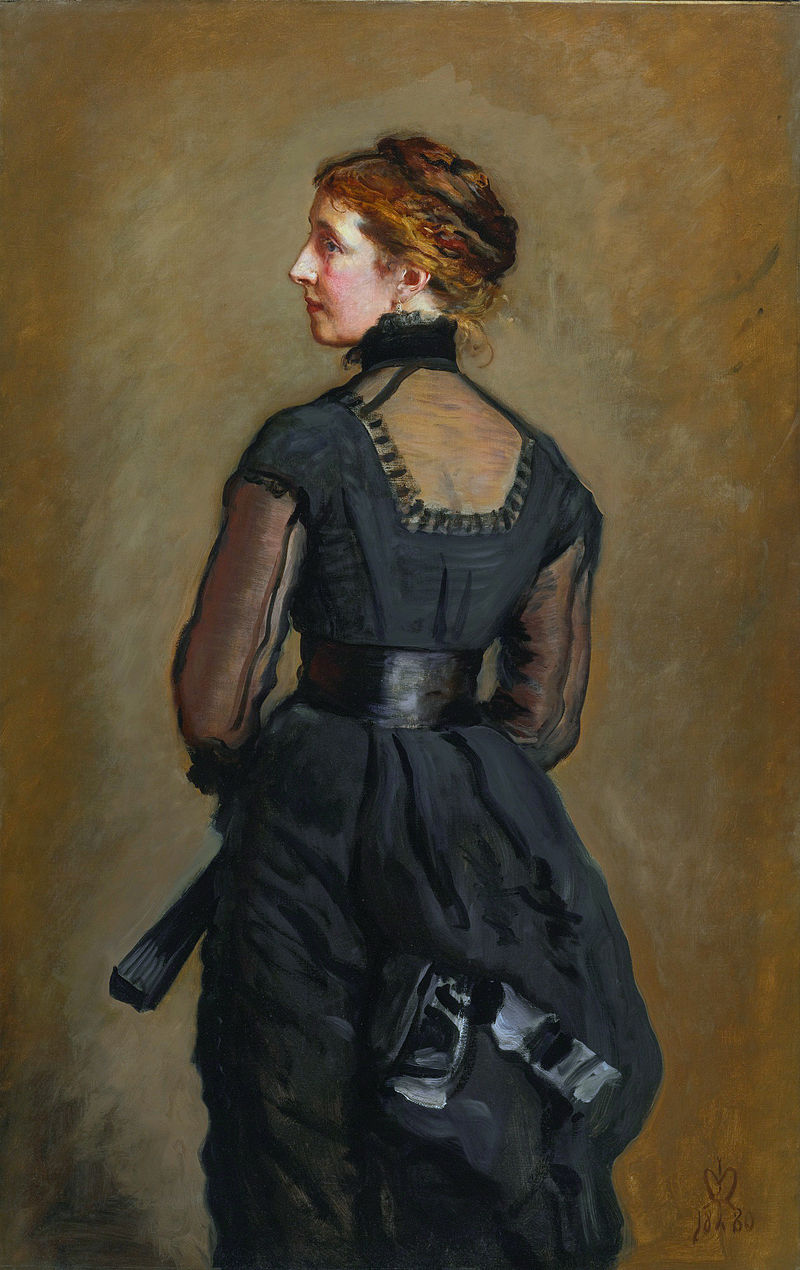 What’s the story behind the Portrait of Kate Perugini – Daughter of Charles Dickens?

Portrait of Kate Perugini – Daughter of Charles Dickens spotlights a brilliant lady in black. The painting title points to her parentage. But there was much more to Catherine Elizabeth Macready Perugini (née Dickens). She was herself a painter and lived among the artistic elite all her life. In fact, Kate twice married men who both painted and wrote books. Her first husband, author and artist, Charles Allston Collins, died before this portrait. Some say that’s why she’s wearing black for what was essentially a wedding portrait.

After all, weddings are joyful and often colorful events. Most brides don’t wear black. Many point out Kate’s widowhood as the reason behind this dress. But correlation doesn’t always mean causation. Sure, it’s a factor. There are also other factors. For instance, this fantastic dress gives her a regal air. Also, we know Kate loved the color black. She likely chose this look for the portrait given that Millais was a close friend. He went on record saying Kate played a powerful role in her portrayal here.

A painter herself, Kate knew about composition as well. So, her influence wasn’t only for personal purposes. This work included her artistic vision as well as Millais’s. The black dress may not have been a mourning garment. But we catch a whiff of Kate’s first husband here regardless. Millais had been close to Collins long before he’d married Kate. In fact Millais influenced her husband’s painting quite a lot. The painter was also close friends with her father. Luckily for Kate, she was a spitfire who knew how to stand up for herself. No matter how many men were around, Kate wasn’t intimidated.

She looks over her shoulder, toward the artist and/or viewer. It’s as if someone behind Kate called out her dead husband’s name. That would explain this choice of stance for the portrait. Yes, she’s getting married. But Kate also has a past – never forgotten. It will always remain a part of her. That’s the meaning behind her turned position here. We know from historical records that she selected this particular pose for the painting.

When I first saw this painting I thought about its timing. Her first husband died of cancer in 1873 and Kate married her second, Charles Edward Perugini, in 1874. That’s the year Millais started painting this portrait. In fact, he was one of only five guests at the wedding. Portrait of Kate Perugini – Daughter of Charles Dickens was his marital gift to her. It took him six years to finish.

We can’t know why it took so long for Millais to complete this painting. All we can know for certain – it was worth the effort. The fact that Kate was an esteemed portrait painter herself must have been a factor. She was also well known for her unrestrained opinions. In fact, as a child, they called Kate Dickens “Lucifer Box”. She was a tiny but mighty firecracker. There’s a glimpse of this in Portrait of Kate Perugini – Daughter of Charles Dickens. Namely, she’s got luscious, red, hair. This glorious, swept up, coiffure brings the only color to life in the portrait. It draws attention to her head, like smoldering embers atop her coal-colored dress.

Kate was a brilliant, quick-witted artist. We may deduce that she was well known for her intellect thanks to this focus on her fiery crown. The black dress exemplifies Kate’s sophistication as well as her personal pain. As mentioned before, she lost her husband a year before Millais began this painting. But Kate suffered another trauma in the interim before he finished it.

Two years after marrying Perugini, in 1876, her baby boy died at seven months old. She never had another child and when Mr. Perugini died, in 1918, they buried him next to this baby. There’s no pain that matches a death of one’s child. When I learned about this wretched loss it came as a shock. We know that Millais didn’t finish this until 1880. So, how could anyone presume that Kate was mourning her first husband here? If this dress signifies mourning, it must be for her baby as well.

It’s true – Millais had been friends with her first husband. But he was also close to Kate. He said she made many of the choices for Portrait of Kate Perugini – Daughter of Charles Dickens. So, it’s crucial to consider her point of view in this masterpiece. The wonder of this portrait comes from Millais, though. He painted a divine blend of luscious simplicity in this portrayal. That’s thanks to the rich detail of Kate’s sophisticated dress and beautiful features.

The spare use of color emphasizes these delicate elements. It’s as if Kate stands in a spotlight, though the background is beige. The glorious light on her face at the painting’s top parallels a glossy glow on that bow near its bottom. Her dress would be equally exquisite without a bow. And this woman would be just as worthy of a masterpiece portrait without that beautiful face.

Who was Kate Perugini and why is she important?

Kate Perugini grew up in the Dickens household. She was daughter to one of the most noted British authors of all time – Charles Dickens. A spitfire from birth, it was often said she was his favorite.

Catherine Elizabeth Macready Perugini (née Dickens) lived an artist’s life. She wrote “Edwin Drood,” and the last days of Charles Dickens as well as The Comedy of Charles Dickens as co-author with her father. But Kate’s most known for her portraits. Her paintings of children have delightful charm and show incredible skill. My favorite among then is the charming Dorothy De Michele.

What is John Everett Millais known for? 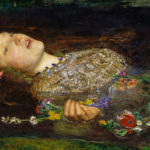 Millais painted extraordinary portraits. His most famous was Shakespeare’s Ophelia (zoomed in here). It’s ironic that Millais is best known for painting a fictional character. That’s because he was masterful at portraying the depths and integrity of real people and places.

No challenge was too great for Millais. He painted the most extraordinary people of his time as well as the rockiest terrain. Millais had a special gift for excavating the jewel out of even the crankiest disposition in a portrait. This helped bring a fanciful charm to his work.

Why is Portrait of Kate Perugini – Daughter of Charles Dickens an important painting?

John Everett Millais loved a challenge. He was known for painting landscapes with dangerous terrain and difficult portraits. In fact, Millais was an adamant supporter of the curmudgeon painter, Whistler. This compassion for all types shows through in his work. Millais mastered capturing the best character for each of his subjects.

Portrait of Kate Perugini – Daughter of Charles Dickens sets a primo example of this. Perugini was a complex, vivacious artist who lit up every room she entered. Millais exemplified his fresh, lush and sketchy technique. This new take on portraiture propelled Millais past his former enclave among the Pre-Raphaelite Brotherhood. So, the portrait marks a significant shift in this master’s painting career.