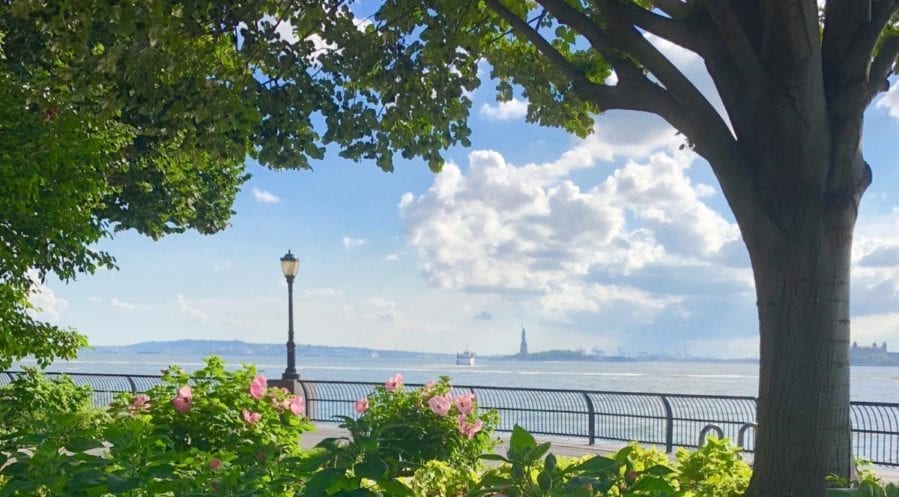 Of course, not everybody can come to New York City and visit the Statue of Liberty in person. But we can all see Ms. Liberty. That’s thanks to a new documentary, Liberty: Mother of Exiles. The movie tells many stories about this eminent statue. It’s a universal tale of the creative process, artistic expression, and freedom of all kinds.

This film reflects on the statue as a symbol as well as her tangible reality. It reveals how people from all over the world see Lady Liberty. Turns out freedom’s often fraught with challenges – from artistic expression to survival itself. We all have to fight for it at some point. The Statue of Liberty is no exception.

Frédéric-Auguste Bartholdi made Lady Liberty as a gift to the new world from the French people. An overarching theme of this flick arises out of this symbolic present. With this gift, we see Bartholdi shine a light on the whole point of the United States. Our country’s greatness lies in giving. That’s how we can grow strong to unite as people and a nation. Thus, Liberty: Mother of Exiles is more than informative, and entertaining. It’s a poignant reminder. In fact, the movie feels delightful – uplifting even. That’s thanks to the openness and social brilliance of Diane von Furstenberg. With her help, this story’s filled with bright and colorful people.

Crowdfunding put this statue on Liberty Island back in 1886. The people paid for her. It was initially a gift. That’s true. But we also had to pay. It was a similar situation to when Oprah Winfrey gave cars to her entire TV show audience. Some found their gift a bit less thrilling when they discovered they had to pay exorbitant taxes on it.

When the Statue of Liberty arrived on our shores in 241 crates, we weren’t ready. She needed a pedestal. After all, giant copper statues can’t just chill loose and breezy on their own. Like freedom itself, they need a solid foundation. Luckily, upstart newspaperman, Joseph Pulitzer took the helm and crowdfunded our Lady’s pedestal. He blasted the news of our need to the rafters. Everyday people responded and sent in money. Thank goodness. Because if more time had passed we would have lost our Lady Liberty forever. Can you imagine New York Harbor or even the US without her? We wouldn’t be the same.

Why Liberty: Mother of Exiles Rocks

This flick will make you love Diane von Furtstenberg. It’s inevitable. She somehow manages to be an aristocrat, an icon, a brand unto herself, and also completely down to earth. There are two affecting scenes where this becomes clear. DVF connects with us, the viewers in one. In many other scenes she connects with everyday people. It natural for her. She’s comfortable with who she is. This likely comes easy when you’re Diane von Furstenberg.

In Liberty: Mother of Exiles she speaks of her role as modern day godmother to the Statue of Liberty. It’s like a circle, Diane explains. When her mother was young, she barely survived a Holocaust concentration camp. In fact, when she later married and consulted a physician, they told her she’d never have children. Her body had been so eviscerated by Nazi cruelty. But then Diane was her miracle baby. This child’s existence brought her newfound hope and joy.

DVF grew up with this beautiful story intrinsic to her identity. By being born, she brought her mother back to life. Thus, revitalizing the Statue of Liberty, von Furstenburg “completes the circle”. She performs this brilliant miracle once again. Diane’s $70 million fundraiser brings our collective Mother, Lady Liberty back to life. The particular beauty of her godmother work for the Statue is that it’s a gift for us all.

DVF also brings a social mastery to Liberty: Mother of Exiles. It’s her greatest gift in the movie. Throughout the flick she interviews people. Diane’s remarkable with street artists, factory workers, and all sort of everyday people. She makes them feel comfortable and this brings out their stories. It’s lovely to watch her portray a well known theory of class. An age-old cliché about what it means to have class or be classy says it’s about making people comfortable. That means no matter how awkward the situation, a classy person makes others feel at ease. That’s class. DVF personifies this in the film. She brings a palpable amenity to everyone she encounters. It’s a pleasure to watch. More importantly, it brings the best stories out of people. This invigorates the movie.

The Gift of Freedom

Everyday people donated all those crowdfunding dollars. The Statue of Liberty sits in New York Harbor thanks to them today. There was another huge crowdfunding campaign in the 1980s. Regular folks sent in more than $300 million over four years to fund her restoration project. Many were small donations. In fact, I remember sending in ten dollars to it at thirteen years old. I was only one of millions, though. That was thanks to a TV campaign you can see in this movie. These are the people who love Lady Liberty the most. That’s because they feel like she gives them a greater gift – freedom. In the documentary, Diane von Furstenberg sets a perfect example of this.

DVF plays the role of godmother to the landmark statue with her own brand of crowdfunding for her museum. But von Furstenberg’s role as storyteller serves as the heart of this movie. She shares her riveting family story and thus crystallizes the meaning of Lady Liberty. It’s not only because Diane von Furstenberg opens up on a personal level that’s gripping and real. We also see the connection between her singular story and the universal one of all people. Everybody wants to feel free. Her story in Liberty: Mother of Exiles reveals how we can all keep that freedom wheel turning.

One of the first scenes of Liberty: Mother of Exiles shows broken shackles at our statue’s feet. She has struggled. Our symbol of freedom didn’t have it easy. Liberty has a price. Of course, it’s a challenge to overcome slavery, tyranny, and all types oppression. Even just holding that torch up all day and night represents a certain resilience. Liberty is a gift. But that doesn’t mean it comes for free. There’s an inherent cost. The point is – it’s worth this price. Here’s Liberty: Mother of Exiles, a movie that shows us how and why. The film’s beauty lies in both the literal and figurative telling of these stories. Thanks to DVF, it’s got lots of heart to boot.