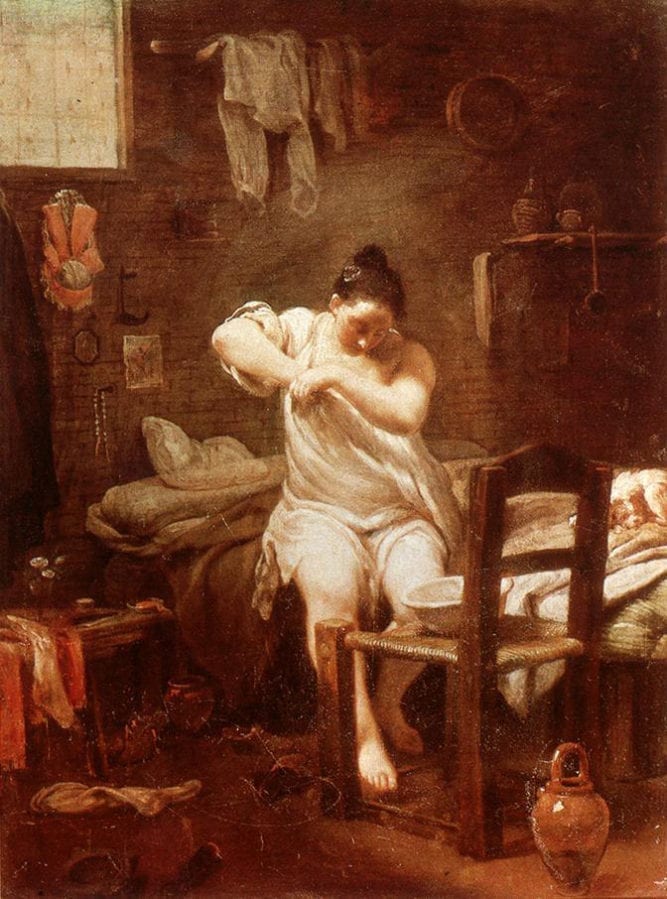 The Flea by Guiseppe Crespi tells a story without revealing the main character. We only see the reaction to the flea, not the pest itself. This intimate portrait from 18th century Italy depicts virtue. That’s because the lady shown defines the “good woman” of the time period. Sun shines on her alabaster figure in the center. It’s a private time for her. What they used to call a “toilet moment”.

Prefer listening to reading? Click below for an audio version.

But this scene also seems onstage thanks to the painter’s lighting technique. We know she’s virtuous from his details. Symbols from the time period signal this – such as her hair accessory and flowers on the table. Her softness also reflects a gentle personality. She seems airbrushed or filtered with fuzzy edges, a visual signifier of sweetness even today.

Still, her situation as a whole looks rather bleak. She clearly has limited means, given the state of her bedroom. It’s small, simple, and varying shades of drab. Even the flowers lack color. The only glossy detail lies in a glint on the glazed pottery in the painting’s foreground. Everything else in the work feels muddied or muted. This gives The Flea a sense of reality.

But it’s not a harsh life. She’s poor, yes. Still, she’s surrounded with small comforts and love. For instance, the sweet puppy on the bed beside her. The dog may also be the source of her current flea situation. Yet, anyone who’s experienced canine love understands that they’re more than worth the trouble. Nobody and nothing can show true love like a dog. The Flea is a mere nuisance in comparison.

This is a woman who loves herself. The flowers may be plain. But they’re also a sign of self-care. There are times when we all need a boost. A few flowers can do the trick for some ladies. These are a sign that this lady is one such woman.

The Flea – Portrait of Self Interest

In fact, Crespi gives us many indicators of this lady’s full and virtuous life in The Flea. It’s not shared with anyone other than her sweet puppy. She’s focused on her own body. Yes, we can see her bare shoulder. But there’s nothing illicit about this portrait. This woman has a mission – The Flea. It’s all business. That locked focus on her own body shows us she belongs only to herself. It’s a subtle point to us today. But in that time it was rare to see a woman show such self interest.

Crespi may have projected his own inclinations onto this virtuous lady. After all, he showed many signs of intense self interest in his life choices. A notorious recluse later in life, he also developed his very own painting style. This is worth noting given that Crespi studied painting by copying the work of others. He practiced the fine art of mastering the rules to then break them and create a new style of beauty in art.

ENJOYED THIS The Flea ANALYSIS?