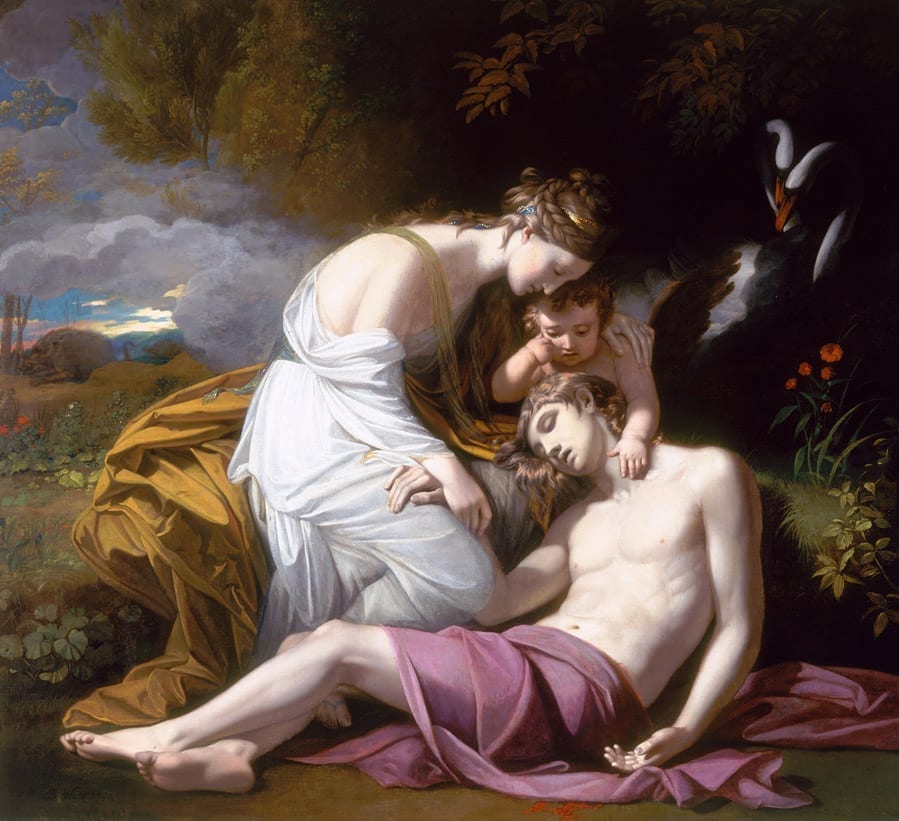 Venus Lamenting the Death of Adonis by Benjamin West tells an ancient story. The beloved goddess Venus fell hard for heartthrob hottie Adonis. But it was not meant to be. In fact, she knew his destiny for an early death on the hunt. No matter how much Venus warned him and pleaded, Adonis dismissed her. This classic painting portrays the tragedy of his stubborn refusal to hear her.

The goddess in Venus Lamenting the Death of Adonis shows compassion and class. She’s not the vixen Venus many painters choose to portray. This is a woman of grace and culture. That’s because this is her moment of true vulnerability. For once, she’s not the desired, adored Venus. It was only in her love for Adonis and losing him that Venus showed weakness.

This happens often for beautiful women in the world. They’ll stay idolized far away objects until one gets to know them. You gotta connect. It’s when active in love that a person becomes real to us. That’s when we can really love them. Venus, the goddess of love, would seem to be the most lovable of all. But she’s as unreachable as any other until she loves Adonis. Once she loves and loses, she seems like a person. This makes Venus loveable – her human side. It’s an intimacy much in Guiseppe Crespi’s painting The Flea.

In fact, much like The Flea, this painting portrays loneliness in love. The lonely goddess faces a life ahead without her beloved Adonis. That’s a big part of grief. It’s a tearing away of the love bond. That connection’s broken. We see Venus lamenting the death here because she’s just discovered it. Such a giving lady, this goddess comforts the crying Cupid. Her arm drapes around his tiny, bent shoulders. We can almost see him shaking with sadness. Clouds rippling in the nearby sky give this impression. They represent the whimsy of nature. Just as clouds are ever-changing, loves come and go in our lives.

Venus also rests her other hand across Adonis’s. It’s as if she’s saying farewell with this touch. As the goddess of love, Venus Lamenting the Death of Adonis shows us that the true nature of affection lies with generosity. Even as she loses her love, she gives more away.

Her heartbreak also lies in the swan necks behind the sad spectacle of his death. The swan duo grant her sadness tangible form. Because of her loss, we can’t see a full heart. The swans sit in the shadow of death. That shadow represents the devastation of loss. If the swan pair were lit, their necks would make a heart with their loving position. Instead, darkness obscures the full shape of love. Thus, Venus Lamenting the Death of Adonis portrays the true nature of grief. It obscures our hope for the illumination and discovery of love. Thank goodness this phase of grief passes and we can find our way to light and love again. Just not within this painting.