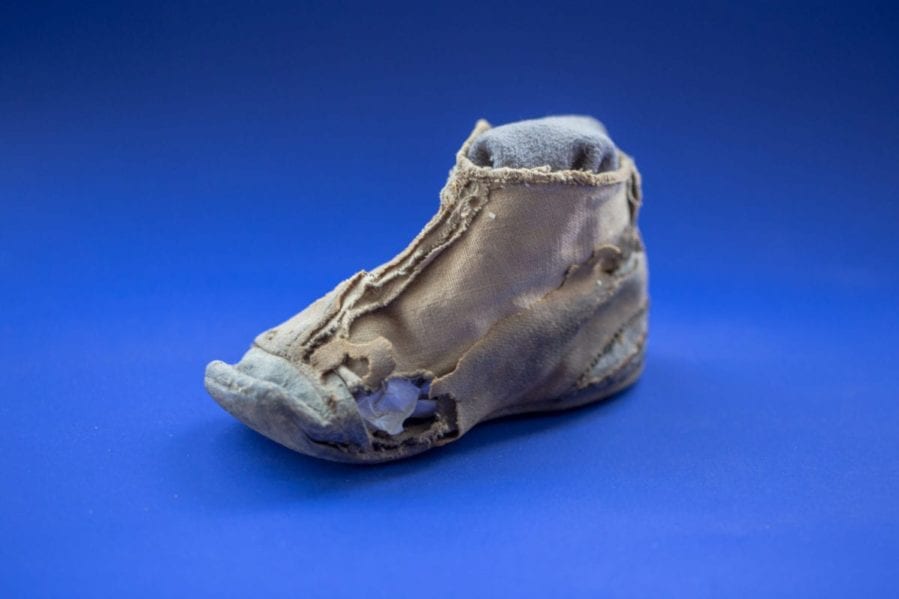 The Henrick I. Lott House makes the long trek into Deep South Brooklyn well worthwhile. This 1719 home itself makes history. Not only because its secret closet served as sanctuary on the Underground Railroad. A history-making archeological find also puts this place on the map.

This house isn’t a museum quite yet. The outside’s exquisite – see above. But its interior needs loving care with peeling paint and worn wallpaper. So, Lott House isn’t usually open to the public. Special events a few times a year open its doors. Otherwise, visitors must book an exclusive appointment – not an easy task. Still, its former beauty remains unmistakable. In fact, the foyer’s sky-high ceiling and welcoming arch are breathtaking. This place feels like a forgotten gem.

That’s because, until recently, the Lott House story wasn’t much told. Luckily, tales of history’s unknown hero are on the upswing. Textbooks tend to focus on the big picture – events, battles, and plagues. But smaller scale acts of bravery make history too. These are my favorite stories. After all, a true hero isn’t courageous for glory. They act with bravery because it’s the right thing to do at the time. Lott House sets a seminal example of this.

Henrick I. Lott wasn’t the original owner of the Lott House. In fact, when he inherited it a great weight fell upon his shoulders. The home and plentiful land came along with twelve slaves in tow. At the time there was already abolition talk in New York City. Emancipation was in the air – but not yet reality for most farms. So, Henrick wasn’t exactly a pioneer.

Still, he freed his inherited dozen enslaved workers. It was Henrick’s decision and he made the moral one. From his time as patriarch forward, Lott House farm workers were all paid, no matter the color of their skin.

Still, the story of Lott family integrity doesn’t end there. The Lott House holds many secrets including a cabinet within a closet on the second floor. Inside this crawlspace cabinet there’s still a bit of newspaper attached to the wall. As you can see above, it dates to 1863. NYC Slavery ended in 1827. But the Underground Railroad served as sanctuary to the enslaved until 1865. That’s when they were emancipated nationwide. According to Lott Family stories this hidden cabinet was one such refuge.

I experienced many poignant moments at the Lott House. Its romantic window wells inspired my sappy gasp. Paint patches and wallpaper welts aroused an urge to redecorate. But the Underground Railroad hiding spot lodged in my gullet like a sick knot. It’s tiny. In fact, it feels like a trap. Walking inside to read the 1863 newspaper, I thought of Henry Box Brown.

In 1849 enslaved Henry mailed himself in a packing crate. The box shipped with him inside. He posted himself freedom. The package, his live body braced within, traveled far. It went from enslaved Virginia to abolitionist freedom in Pennsylvania.

Henry came to mind in the Lott House sanctum because I felt a sense of desperation. My pulse quickened. I broke a sweat. Imagine living inside a tiny cabinet within a closet… to hunch down in that space makes this hit home. Even a shortie like myself can’t stand upright in there. I felt ill considering a life within such cramped conditions.

This moment spotlights why it’s crucial to revisit historic sites – the visceral experience. These feelings stay with us. They make history real and thus, help us understand it better. An experience penetrates the brain in a meaningful way. It’s an impact that books and classrooms can’t often reach.

The Lott House affected me on a deep level. It’s a significant Brooklyn, New York City, and American History landmark. I want to help make it vital to all these communities – from local to national. That’s because this historic landmark isn’t a museum yet. Someday it will make a spectacular one.

An Archeological First at Lott House

One recent revelation at The Lott House thrilled archeologists, historians, and Brooklynites in tandem. Turns out enslaved Lott household members shared attic space above the kitchen. This part of the house was sealed off long ago. In fact, it remained unknown to the modern world until 1998. then a Brooklyn College group began studying the house.

Underneath the floorboards in this hidden attic archeologists Alyssa Loorya and Christopher Ricciardi made a rare discovery. Objects were arranged in a meaningful pattern. Together these pieces formed a spirit cache. One of these objects serves as my shoe-on-blue headliner for this article.

Loorya and Ricciardi also found three corncobs, oyster shells, and a sheep (or goat’s) pelvic bone. These symbolic pieces, placed in careful positions, created a talisman. That means the objects were set to ward off evil and protect The Lott House. This symbolic act of faith, positioning the objects, teaches us an intimate bit about slave life two hundred years ago. It’s remarkable to uncover objects exactly as placed by enslaved household members. In fact, this was the first such find in New York history.

Archaeologist Alyssa Loorya explains the significance of the unbroken corncob. When found at the site, this one sat in the middle – the primo position. It thus represents the separation between the living world and that of the dead. So, the crossing of the cobs works as a consecration between these two worlds.

But the baby shoe fascinates me even more. That’s because it seems to show who the enslaved meant to protect. The shoe’s a wreck these days. Still, the fix-stitching down the side shows it was pretty beat up back then too. A baby actually wore this. The sweet vulnerability of this broken down shoe points to a need for safeguarding.

Oysters were a primary food source in New York City back in those days. The Hudson River teemed with them. So, the oyster shells likely represented nourishment. Taken all together, these objects tell a sort of love story. The enslaved residents of the attic cherished their household. They didn’t only work and live with the Lotts. That’s because this place and these people were their home and family. The spirit cache was a poignant creation – a security zone for The Lott House.

How & Where to Dig Deeper

This moved me. So, after my visit, I delved a bit deeper. The archeological objects now sit in the Museum of the City of New York. Visit the Dutch founders exhibit of the first floor to see them. Then check out the rest of this rad place. It’s a fantastic curation of objects that tell New Yorker stories. I recommend it for many reasons. Of course, there’s the Lott House finds.

But I also loved the Stettheimer Dollhouse (second floor). The coolest object within MOCNY? A pair of pure gold diamond encrusted cuff bracelets will mesmerize you. They were a wedding gift from Boss Tweed to his daughter. These put Wonder Woman’s wrists to shame. Not to mention NYC’s history of political greed and corruption.

Another fascinating way to dig a bit deeper – Brooklyn: The Once and Future City. Reading this brand new book by eminent author, Thomas J. Campanella, I lost myself in vivid stories. It’s a satisfying historical romp through the enormous borough’s unsung history. Best thing about it? This book explores the untold histories of Brooklyn. It’s my personal passion laid out in an exquisite collection.

Not only that, the first chapter covers the Henrick I. Lott House. It’s edifying to open a remarkable book and find my own particular interests reflected back at me. Of course, Mr Campanella reflects with more grace, length, and eloquence than I as well. He wrote a mighty tome. Campanella’s extensive research and keen writing make the book a rich and tasty meal for all of us to enjoy.

Without my partnership with Historic Houses Trust of NYC, I wouldn’t have visited this glorious house. They make my historic house visits extra special and, in this case, possible. I’m excited to see all 23 of their historic home sites across NYC’s 5 boroughs. Travel 367 years of history right along with me! Check ‘em out here @hhtnyc and visit their site – http://historichousetrust.org/.