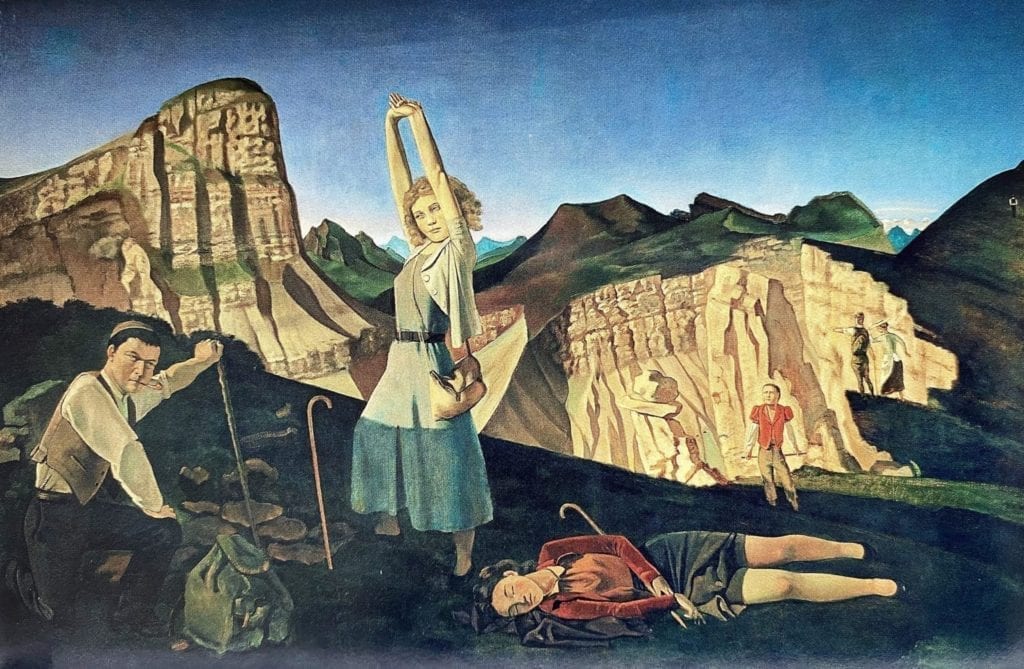 Balthus uses both realistic and surreal imagery to give The Mountain a sense of mystery. We call this contemporary painter Balthus because his name’s a mouthful. Count Balthasar Klossowski de Rola. His paintings are hard enough to digest without swallowing that too. Also, the alias Balthus has the same distinctive grace we see in his paintings.

It’s easy to pick out a Balthus piece among modern artworks. His muted palette, clean lines, and sensual resonance are unmistakable. This painting sits among the early work of Balthus. The plan was for this to be part of a series about the seasons. We can get a sense of summer in the work. But once complete, it was clear this painting’s all about The Mountain.

In fact, the bright streak of hot sun serves to highlight the setting as hero. We know it’s summer thanks to details like bare legs on the awkward prone foreground figure. There’s also a woman wearing a sunhat in the background. But these are minor details, much like the time of year in this painting. Our true subject lies at the work’s center. The woman stretching and The Mountain she represents.

It’s a perfect match for this golden girl to symbolize the bright shining mountain. Mountains are always feminine – no matter how craggy. But here we see Balthus’s signature elegance even with the rocky setting. This woman stands tall and unabashed. She faces viewers with an offset gaze. It mirrors the stance of The Mountain behind her. In fact, her skin matches its tone and color. Also, her lower half’s cut off by a slanted shadow. It parallels the land she stands on that obscures the mountain’s lower half.

He often eroticized young girls. Many of his works can be disconcerting for this reason. Some glory in it. Not me. The only time I’ve cringed in the Metropolitan Museum of Art was viewing a Balthus pre-teen nude. Their Balthus: Cats and Girls exhibit held me spellbound. But his sensual take on an eleven year old irritated me. It was no less a fantastic painting – I told myself, walking away. After all, Balthus is a master painter. Art means to disrupt and make us feel things. These thoughts gave me little comfort.


I did find relief later that day, though, when I saw The Mountain. This is my favorite Balthus painting. It’s a gem. Few of his works lack a pre-pubescent feminine figure. Some might say his wife, the golden girl featured at center could be a pre-teen. No. This is a woman. In fact, such a strong woman – she’s a mountain.


At center in The Mountain we see her stretching – arms held high. It’s a joy to behold. The sheer enormity of the scene makes viewers feel a part of it. Its canvas stands at eight by twelve feet. So, there’s a sense of physical overwhelm standing before it. The woman in the middle feels almost real thanks to her formidable size. Beside her another woman lies on the ground. The awkward stiffness of her pose adds a disorienting feel to the piece. It seems the rigorous mountain hike may have beaten her.


A man kneels on the other side of The Mountain. He’s thrust a walking stick into the land – a proud hand upon his knee. This man holds himself like a conquerer. He completed his journey up the mountain. But the sensuality and strength resonates from the painting’s central figure. This woman’s accomplished more than a mere climb. She’s become one with The Mountain. When you connect with nature and are complete; there’s nothing left to conquer.

Was Balthus a French or Polish Painter?

Balthus grew up in Paris and Geneva. He was born in France – but with Polish parents who’d emigrated there. They populated his childhood with exceptional artistic influences. We’re talking Bonnard, Rilke, Cocteau, and Matisse. He didn’t just have a Parisian life as a child. Balthus had THE Parisian childhood most artists can only dream about. So, with this quintessential French background, Balthus is both a Polish and French painter.

Where is The Mountain in Balthus’s painting located?

As a teen Balthus moved to the Swiss Alps with his mother. Both of his landscape paintings on view at the Metropolitan Museum of Art portray these mountains from his adolescence. He painted them in his Paris studio as an adult. But his connection to that place still shines through these works. The painting often feels like a dream to viewers. It certainly represented a powerful memory for Balthus.

Why is Balthus an important painter?

Balthus painted masterpieces. That’s enough to make any artist important. But he was also quite famous in his lifetime – even as a young artist. That’s partly thanks to the simple power of networking. He grew up with artistic icons as part if his everyday experience. In fact, close ties with such masters as Picasso, Man Ray, and Camus continued throughout his life. Balthus wasn’t an important painter because U2’s Bono sang at his funeral, attended by supermodels and prime ministers. But that fact helps show just how significant a painter he remained.

What Balthus painting at The Met was petitioned for removal?

Thérèse Dreaming created quite a stir at The Met in late 2017. The painting started a censorship controversy in the NYC art community. A public petition circulated. It labeled the painting explicit and suggestive. The Washington Post published a piece at the time that said, “This painting might be sexually disturbing. But that’s no reason to take it out of a museum”. The Metropolitan Museum of Art agreed and continues to exhibit Thérèse Dreaming.

ENJOYED THIS The Mountain ANALYSIS?