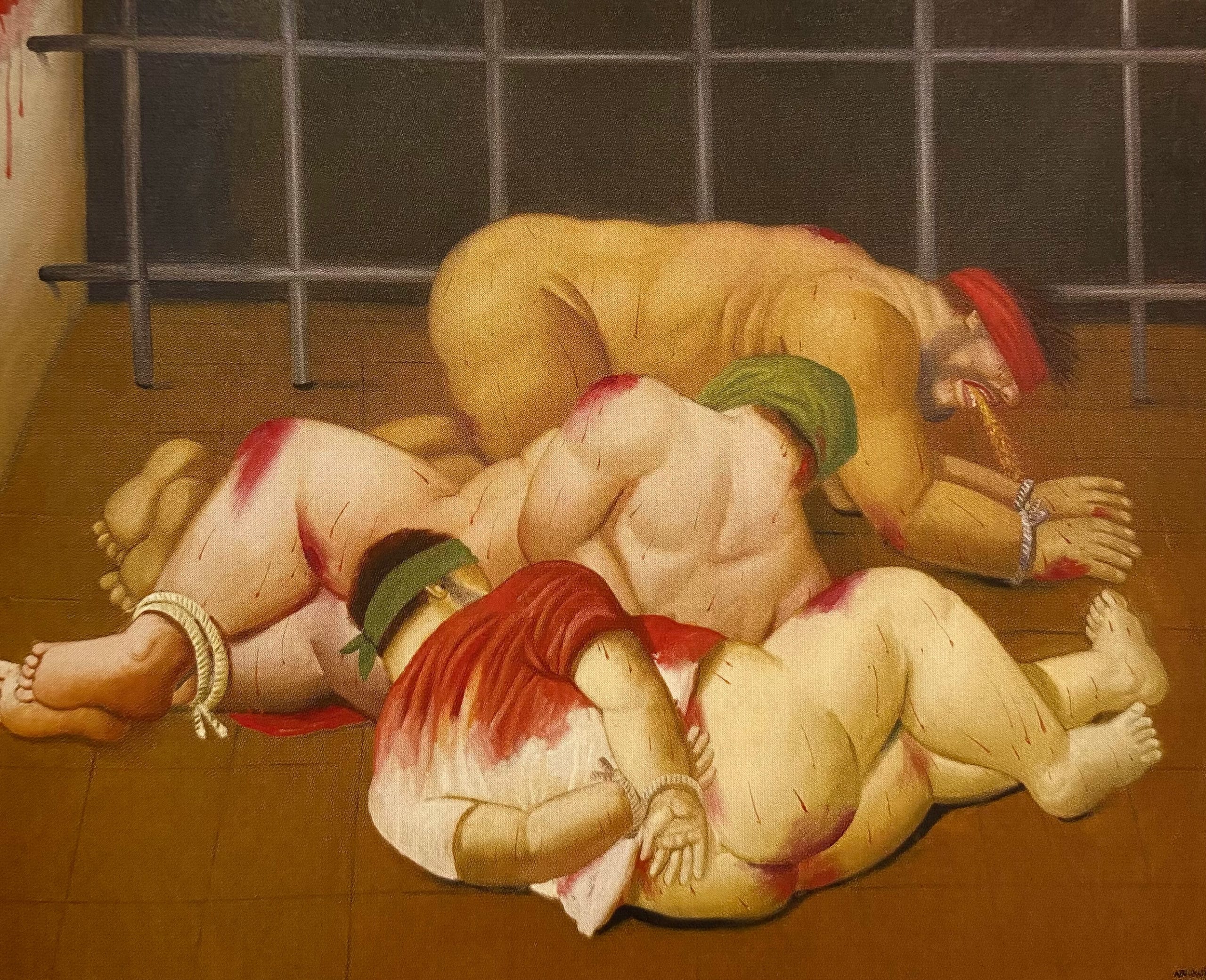 What is Fernando Botero saying with his painting Abu Ghraib 46?

The fact that Fernando Botero painted the agonizing awe of Abu Ghraib 46 was a shock to me. After all, he’s known for placid domestic subject matter. Botero does carry over his key trademark to this masterpiece, though. The bodies in a Botero always seem a bit swollen – as if pumped a few times like a ball or balloon.


There’s a pair of enormous Botero Statues in NYC, where I live. Every time I see them it occurs to me that he inflates the sensuality out of nude adult bodies. That’s not easy – unless you’re Fernando Botero. He puffs them up so rounded that they seem like giant babies.


This has held me back from looking deep into much of his work. I didn’t give Botero a chance until the remarkable painting Abu Ghraib 46. He painted this at 73 years old in 2005, then gifted it to the Berkeley Art Museum. It makes sense that Botero would give this to an American museum. That’s because of his adamance about the painting’s meaning. He spoke with insistence about this as a condemnation of all cruelty. It’s not anti-American, he said. Rather, Abu Ghraib 46 supports the Geneva Convention – which prohibits torture.


I love the unexpected way Botero’s bodies serve his message. It gives the piece resonance viewers don’t usually get from Botero’s child-like figures. These three men are bound, beaten, bloody, and bare. Botero’s baby bodies emphasize their helpless state. One even has a shirt on and is otherwise naked. This returns him to an infantile status.


They’re also horizontal on the floor, as children in a nursery often pass the time. The painter obscures identifying features with blindfolds. Together, all these elements show how prisoners in Abu Ghraib lost their adult agency. Of course, agonizing physical pain feels unbearable. But torture’s cruelty also strips our humanity.

Botero uses restrained color to emphasize specific details in the scene. For instance, he gives the three men each a slight variation in skin color. A figure closest to the viewer has the palest skin. The middle man flushes pink and a kneeling figure at the back has darker, tanned skin. These distinct variations remind us that torture hurts all sorts of people. Trauma initiates a chain. Unresolved pain (soldiers often suffer with PTSD) may lead to harmful behavior. So, hurting someone can pass that pain along to the others in that person’s life.


Speaking of life, Fernando Botero references this with Abu Ghraib 46’s colors as well. We see him representing life and a sprig of hope with his token usage of green. It’s the color of growth, vigor, and promise. It has a dewy coolness, as in fresh grass, that both opposes and complements the color red. This flaming hot firebrand of a color is the only other that Botero uses for Abu Ghraib 46. Red symbolizes heat, violence, blood, and fury. But, of course, there’s also a bit of both love and hate in its passion.


Botero blankets the canvas in neutrals but for these bits of red and green. There’s blood and the blindfold in bright red to represent danger and rage. But the other two men wear green blindfolds. They’re the hopeful ones. Although this pair also bleeds, bound on the floor, Botero gave them a dash of life’s possibility before their eyes. That means they can see a potential future.


However, the figure with the red blindfold appears to have given up hope. He’s bent forward as if about to vomit and we can see his ribs. That’s a first for a Botero painting! It reveals his severe state – close to death. This explains why the painter gave him the only red blindfold.


It can be excruciating to stand before Abu Ghraib 46. Though it’s only about five feet square, this masterpiece overwhelms viewers. That’s a sign of its mastery. We face the reality of tremendous pain and its battle between hope and hopelessness. Botero used his signature figurations to magnificent effect in this piece. He reminds us what matters most – life itself.

Fernando Botero was an internationally acclaimed artist in 2003, when he started painting this series. Horrified by the photographs of tortured Abu Ghraib prisoners, Botero channeled his artistic mastery into advocacy.

News stories grab attention. But a master painter’s work may hang in museums for hundreds of years. So, Botero painted and drew 56 works to create his Abu Ghraib series. He then donated many of them to top museums.

Why does Botero paint people with large proportions?

Fernando Botero started this practice of exaggeration in 1956. Funny enough, he wasn’t painting a person when it all began. The mandolin is an instrument with a tiny hole compared to the rest of its body. So, when he was painting one, Botero found himself making the body of the mandolin larger and larger. It was the only way he could get the hole to seem the right size in his painting.

In the end, his mandolin had huge proportions. But Botero fell in love with the look. He began painting all his work using this exaggeration technique. Eventually, it became his trademark.

What was Fernando Botero most known for? 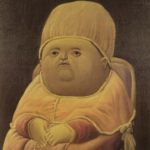 Fernando Botero is a world-renowned Colombian painter. First and foremost, he’s noted for his bulbous portraits in sculpture and paint. In fact, he’s so well-known for this, they call figurative work in this style “Boterismo”.

He’s often cited as the most famous artist in Latin America and his work is more beloved today than ever. One of his paintings has become a popular meme. If you’ve ever seen the “y tho” meme, now you know – it’s a Botero. The painting is his 1964 Pope Leo X portrait.

Check out these other essays on Portrait Painters

‘Colombia ‘A Permanent Accusation on YouTube A short movie on the Abu Ghraib series by Fernando Botero.

“Fernando Botero: Donation and Controversy” Great Masters of Art. 1 May 2011

Abu Ghraib: January 29 – March 25, 2007 The first US institutional exhibition at UC Berkeley, with a webcast of a conversation between Fernando Botero and Robert Hass on the day of the opening