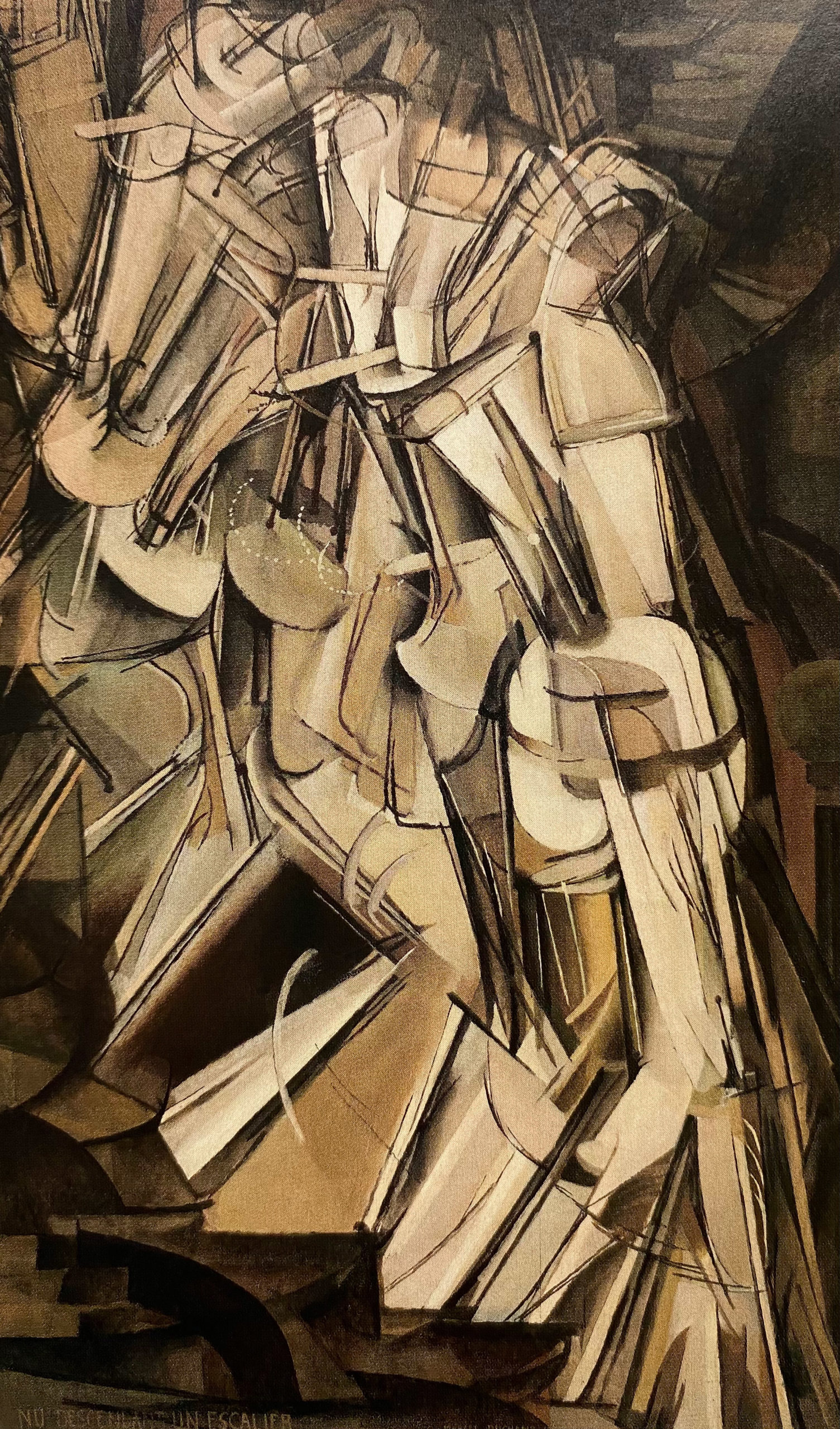 How did Duchamp’s painting Nude Descending a Staircase No 2 set the art world ablaze?

Duchamp’s Nude Descending a Staircase No 2 caused a ruckus from day one. It first exhibited February 17, 1913 at the Armory show in New York City. Maligned and misunderstood, the event also launched American modernist art. This masterpiece especially drew ire and horror from critics. It’s ironic. This Cubist, Futurist, and asexual painting was provocative. Meanwhile actual, sensual, nudes were status quo.


The New York Times labeled the show “pathological”. Other critics called it a menace to morality. This seems rather silly now. But it was dead serious at the time. Luckily, the controversy only made the included artwork more intriguing to the public. It was a moment of reflection in American art. Critics dug in their heels about its nature and purpose. But everyday art lovers proved themselves thoughtful and open to new ideas.


At the turn of the century, Realists ruled the art world. Acclaimed paintings and sculptures portrayed subjects as close to photographic facsimiles as possible. The more realistic, the better. This was the art community status quo. With that context in mind, it’s easier to see why Nude Descending a Staircase No 2 wasn’t praised by critics at first. But the public was in a different mood and mindset from the start.


The industrial boom of the period enriched everyday life for Americans. They were talking on telephones for the first time and riding railroads. New ideas enhanced rather than threatened their lives. So, refreshing concepts in art were welcome too. No matter how much the critics complained, modern American art started shifting. After all, the world teems with art lovers and buyers. But professional critics are a rare breed. Thank goodness.

In most nude artworks the figure provides viewers with a tasty morsel. That body tells us the story in traditional art. But not with Duchamp’s Nude Descending a Staircase No 2. This masterpiece speaks to us about descending more than nudity. The subject matter is movement. There’s a figure here. Yet this isn’t a figurative painting. It’s Futurist and Cubist. In fact, Duchamp carved this body into a mobile succession of parts. So, viewers don’t see a single body. We only see the action of its descent down the stairs. The nudity remains obscured by its action. Viewers don’t even know the gender of this figure.


I love that integral ambiguity in Nude Descending a Staircase No 2. This painting reminds us that bodies aren’t only interesting thanks to their parts. Bodies move. They transport us. It’s a critical aspect of Futurism. In the Futurist art movement, action matters most. Cubist and Futurist artworks link because Cubism breaks subjects into parts. This often makes them seem to move. For instance, in Duchamp’s masterpiece, the figure’s deconstruction looks like climbing down stairs. This reveals one Cubism’s great gifts. Fragmenting figures on canvas may set it in motion.

Not only does the figure move, it gets the viewer’s mind going in new directions. Before Nude Descending a Staircase No 2, paintings were comprehensible on first sight. We knew what the painter wanted us to see. That may be why the critics saw this piece as an affront. After all, their job involves understanding, assessing, and disseminating artworks’ value and relevance. So, Duchamp’s copper-toned conundrum threatened their livelihood a bit. The public, though, had the luxury of open minds. They could allow for a bit of confusion to percolate before coming to any conclusions.

That’s how Nude Descending a Staircase No 2 impacted people. It got their minds whirling – parallel to the figure itself. Duchamp’s nude looks like it has machinery rather than body parts. Most nudes relish every morsel of the body. Their figures recline for us to better gaze upon their passive resplendence. Duchamp challenges us instead. His imagery tumbles forth before viewers in a fantastic mystery of motion. It’s this magical momentum that makes Nude Descending a Staircase No 2 a masterpiece.

Nude Descending a Staircase No 2 – FAQs

What inspired Marcel Duchamp’s painting Nude Descending a Staircase No 2?

Duchamp painted Nude Descending a Staircase No 2 soon after the turn of the century. During this period time lapse photography was popular. Scientists and artists alike used it to study humans and animals. The photos helped clarify their movement patterns.

Time lapse pictures also inspired Futurist artists like Duchamp. In fact, many art historians see a correlation between a particular time lapse photo series and Nude Descending a Staircase No 2. They point to the section of Edweard Muybridge’s book Animal Locomotion devoted to a woman walking downstairs.

Why is Nude Descending a Staircase No 2 an important painting?

This was the most talked about painting of 1913 – for good reason. Nude Descending a Staircase No 2 changed the fabric of modern art history forever. That’s because Marcel Duchamp portrayed motion rather than just a nude figure as the subject of this painting. He thus challenged viewers to rethink the very act of viewing art. This altered the way artists created and how viewers looked at artwork going forward.

How did Nude Descending a Staircase No 2 impact Marcel Duchamp?

Though the painting generated buzz, Duchamp stayed in the shadows awhile. A few years after the Armory show where it premiered, he saw Nude Descending a Staircase No 2 in the Cleveland Museum of Art. The painter was stunned to see on the caption that he’d been dead for several years. As famous as the painting became, he remained obscure for awhile longer.

Worst of all, Duchamp’s brothers hated his famous painting. They had insisted that he change it before the Armory show. But he refused. Their relationship was never the same. In fact, Duchamp claimed that this estrangement marked the origin of his misanthropy.

ENJOYED THIS Nude Descending a Staircase No 2 ANALYSIS?

Check out these other essays on Cubism

Nude Descending a Staircase, No. 2 at the Philadelphia Museum of Art