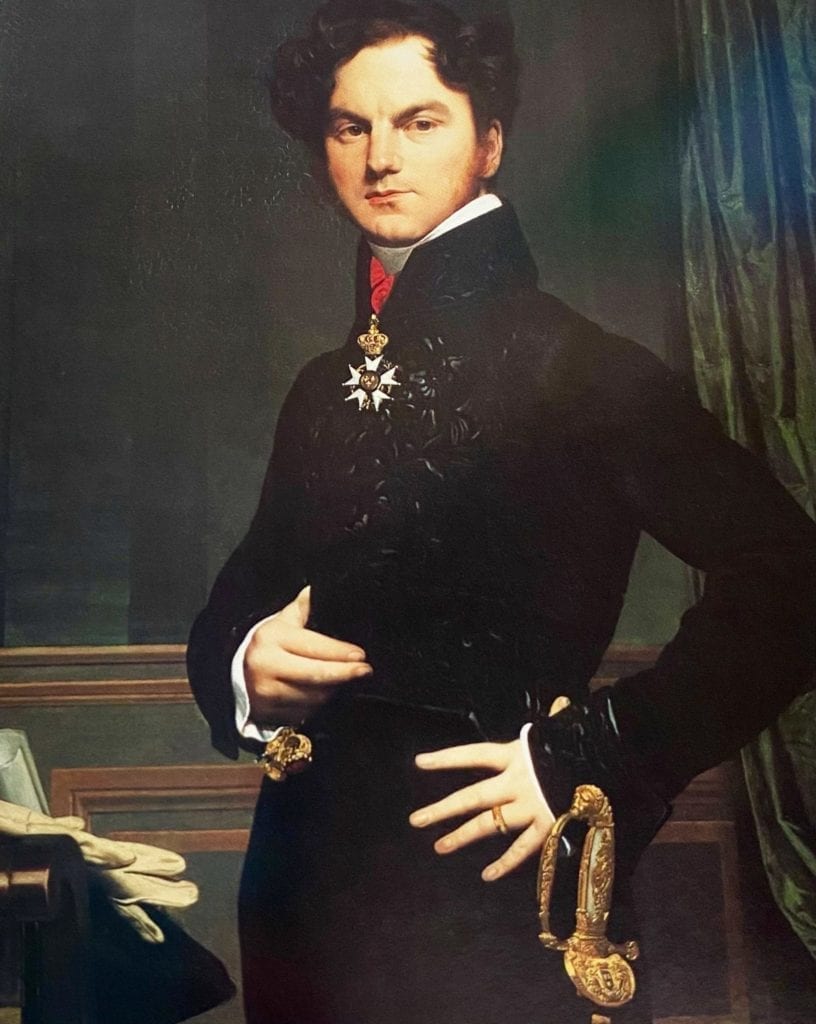 What’s the story behind this Count’s smug mug?

We see how he stands with impudent verticality. He seems to hold himself upright thanks to self importance rather than an actual spine. The Count also appears to squeeze himself at the waist with his hands encircling both sides; as if holding himself together.

Ingres was already an esteemed painter when called by Amédée to paint this. In fact, the Count was a big fan and collected the painter’s works. But Ingres also knew of Amédée’s wretched reputation. Well known and avoided for his pompous pretensions, the Count had only one true fan – himself. It must have been quite humbling to paint such a man at his request. Still, humility was likely the best attitude with which to paint him. Forced to create with great precision, only what he sees before him, Ingres captured the real Count.

Viewers notice first that Amédée David the Comte de Pastoret wears a Legion of Honor cross. How could they not? It’s white, gold, and red gleem on the otherwise dark background. This is how Ingres shows us what’s most important to Amédée. The cross signifies status. That’s this subject’s top priority. Setting the bright medal on the somber darkness gives it the appearance of floating in empty space. Ingres tells us there’s little substance behind this symbol. It also emphasizes his sneering, stern, face.

Ingres pleased Amédée David the Comte de Pastoret with prestigious symbols. He filled the portrait with elite imagery. The white gloves tell us he’s a well-bred man about town. There’s also a bicorn hat with the gloves. All black, it appears to have two horns – one on each side. These hats were typical for military officers. The Count likely wanted to signal his political interests with the hat. In fact, he supported Napoleon – also known for wearing bicorn hats. There’s a scroll beside the hat to represent Amédée’s literary skills. He was quite proud of his poetic talent.

The finest details in the portrait shine in gold. The medal at his neck appears as real as the expression of his face. On each side Amédée wears a meticulous and functional gold piece. His belt buckle glimmers under his bent left hand. While the glorious swoop of his elaborate golden hilt parallels the Count’s stance. He thrusts his hips forward a bit – not a natural way to stand. But neither are his clingy side-hands. The awkward pose makes Amédée look insecure. Combined with a smug face, the posturing makes his gold accessories more significant. The painting is actually about them – not the man.

It’s as if the Count needs accoutrements to convince others that he’s worthy. Best part is, they give the painting a compelling story. So, Amédée was right to be insecure. Without his symbolic trinkets, there’s little substance. He’s all attitude and style. Irony is – this combination might make him a star if he were alive today.

The painting Amédée David the Comte de Pastoret remains popular. In fact, it has been since Ingres finished it in 1826. Soon after the painter Edgar Degas bought this painting for his collection. This marks yet another parallel for this artwork. While Ingres was painting this, the Count bought the portrait Jacques Louis David did of him with his mother, Madame de Pastoret.

When a fine artist, like Degas, buys another artist’s work, peons like myself often see it as validation of our perspective. This need for external confirmation mirrors the Count’s insecurity. Still, his gilded props did indeed help make this painting a masterpiece. And Degas buying it helps me make that very same case.

Who was Amédée David the Comte de Pastoret?

Politician and poet, Pastoret was born into an aristocratic family during the French Revolution. Unfortunately, he never got off that high horse. It was a bit of a surprise because his mother was rather revolutionary. She started day nurseries for working mothers in France. Madame Pastoret also had the humbling misfortune of imprisonment. This was with baby Amédée for a short stint during the Reign of Terror. But it didn’t humble her son.

He grew up to become a bureaucrat and then a poet politician. His reputation remained bombastic, even as he gained stature. Amédée was a comte (Count in French) and later a Marquis. The Count’s art appreciation was so ardent, it might even counterbalance his love for Napoleon. He was especially fond of Ingres and owned seven of his paintings.

What kind of painting is Amédée David the Comte de Pastoret?

Ingres studied painting with fellow Frenchman Jacques Louis David. He considered himself a History Painter. But most Art Historians classify this work as Neoclassical. That’s because Jacques Louis David holds the primo position as the foremost Neoclassical painter. Then Ingres used the same style as his teacher. Also this painting is too formal a portrait to qualify as a History Painting anyway. It happened a lot to Ingres. He wanted to work primarily in History Painting. Still, he was beloved for his splendid portraits. Aristocrats like Amédée David kept him much busier than history ever could.

Where can I see the portrait of Amédée David the Comte de Pastoret by Ingres in person?

This painting graces the mighty Art Institute of Chicago collection. It rounds out their beautiful European paintings and sculpture exhibition. You’ll also find the enchanting portrait of his mother in this gallery. Amédée stands stick straight and tall in his portrait. He looks down at viewers – in both the literal and figurative sense. Madame de Pastoret gives the opposite impression in her portrait. She meets our gaze with warmth and care. Best part is that although she sits in her portrait, it’s more than a foot taller than the painting of her son. The light pink warmth of her picture also contrasts with the dank green chill of the Count’s portrayal.

See the painting at the Art Institute of Chicago