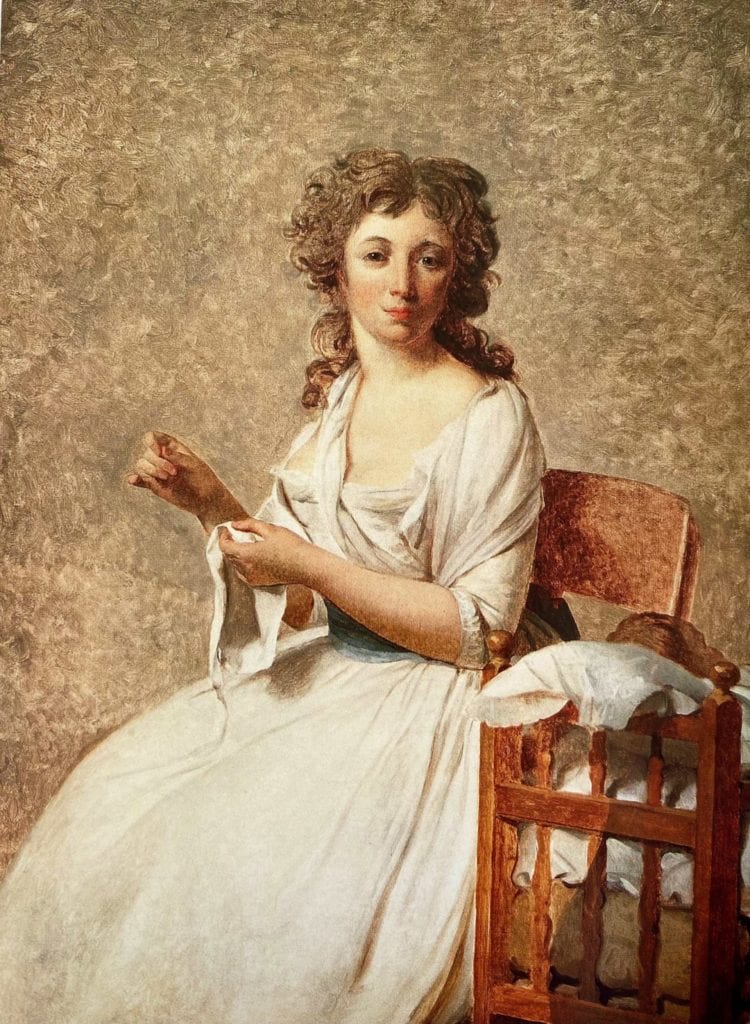 Table of Contents for art blog on Madame de Pastoret and Her Son:

Timing wasn’t on the side of Madame de Pastoret and Her Son. In fact, she married Count Pastoret on Bastille Day. That was the climactic end of the French Revolution. As a noble aristocrat, this wasn’t an ideal anniversary day. It also meant revolutionaries, like David, started to see her in a different way. When he agreed to paint Adelaide Anne Pastoret, she was running her own revolution.

Madame de Pastoret used her social status to start France’s first day nurseries. She advocated for working mothers. Her good work set a precedent for French maternal rights and services. This was the woman Jacques Louis David set out to paint. Her son in a bassinet symbolized the children and families her advocacy helped. When David first created her image, she represented a revolution to him. Adelaide’s clothing choice also reflects this. Although an aristocrat, Madame de Pastoret wears a dress designed for easy breastfeeding. This was uncommon practice for the nobles at the time. It shows enlightenment and substantive choices. Jacques Louis David highlights this element of her character.

He also portrays her sewing. She’s a woman at work. This represents her positive contribution to society. Adelaide fought for women’s employment rights. The daycare centers she built enabled French mothers more freedom and time to work. It was her charitable efforts that earned this Aristocrat David’s respect. We can see this in the way he paints her. She’s charming and composed – with a steady gaze. But his admiration soured as the French Revolution hardened the painter’s political resolve.

The revolutionaries plied Jacques Louis David with flattery. He thus adopted their extreme and reactionary ideals. Madame de Pastoret championed child care. In contrast, David advocated to guillotine aristocrats. If you were in a noble family, you deserved at least prison or exile in his view. So, though she worked to help others, Jacques Louis David had Adelaide and her baby boy imprisoned. He also pushed her husband, Count de Pastoret, into exile. That’s why this masterpiece remains unfinished. David stopped work on the Pastoret painting during this time as well. He refused to work for aristocrats. They were royalists and he was devoted to the revolutionaries.

Sometimes artists use negative space as a creative spotlight. It’s how a partial lacking in color or shape for one part may serve a whole image. This type of absence adds value rather than diminishing it. We find a similar phenomenon in Madame de Pastoret and Her Son. Jacques Louis David dropped his paintbrush before he finished this painting. But there wasn’t much left to do. All that’s missing is Adelaide’s sewing needle. Her hand’s poised as if holding it. So, it’s a noticeable absence.


This symbolizes Madame de Pastoret’s impotence. French painter, David took away her husband by sending him into exile. He imprisoned Adelaide and robbed her of freedom. So, the needle echoes these losses. She wasn’t the only one deprived, though. Notice how the portrait shows her sewing beside her infant son. This reminds viewers of the hard working mothers Madame de Pastoret helped. She assisted them before having her own child. Then Adelaide lost her own ability to work. Imprisoned, without a husband, she was helpless. The lost sewing needle now seems bigger in its absence than it would have been as an actual presence.


There’s irony in this. Madame de Pastoret was helpful in the work she did. The sewing symbolizes her industrious service to working mothers and their families. David took away her ability to do this work. Then he also denied her portrait the sewing needle. Luckily, her imprisonment was brief – during France’s Reign of Terror.

Childcare impacts society like a needle stitches ripped cloth into a garment. It helps families flourish. Madame de Pastoret holds that legacy even if she isn’t holding a needle. This masterpiece serves as a compelling memorial to feminine strength. None of us are ever able to finish everything on our to do list. But the best of us keep at it, poised at the ready, till the very end.

Who was Madame de Pastoret from the Jacques Louis David portrait?

David played a role in Pastoret’s imprisonment and the exile. But he’s also responsible for cementing her legacy. That’s because his painting serves as her primary memorial. Even though she revolutionized French childcare, this isn’t as noteworthy as her portrait. For instance, if you Google “Madame de Pastoret”, the first four pages of results all have results about the painting. It’s not until page five that we learn about her good works… and then you better know French.

What did Jacques Louis David do during the French Revolution?

David supported the revolutionaries painting propaganda as art. In fact, he organized propaganda festivals. It was a surprise when Napoleon chose him as First Painter. How could he be the favorite of both revolutionaries and the notorious tyrant? Talent.

Jacques Louis David did jail time for his role in the Reign of Terror. While imprisoned he painted. Napoleon saw some of his work and became a fan. Much like the revolutionaries, he won over David with adulation. Once freed, David returned the favor. He painted flattering portraits of Napoleon and soon became his artist-in-residence.

How did most aristocrat women dress during the French Revolution?

The false rumps that had been popular in Marie Antoinette’s heyday fell out of fashion. Skirts stayed full, though. Just all around rather than only to emphasize the back. Instead fancy dress emphasized the front blouse area with layers above the bodice. This was called the “pouter-pigeon” look. That’s because it puffed out the chest area like a proud pigeon. Soon after waistlines began to raise. It was a continuing trend that led into the neo-classicism of late 1790s fashion.

ENJOYED THIS Madame de Pastoret and Her Son ANALYSIS?

Art Institute of Chicago: Madame de Pastoret and Her Son

Aristocratic clothes of the French Revolution