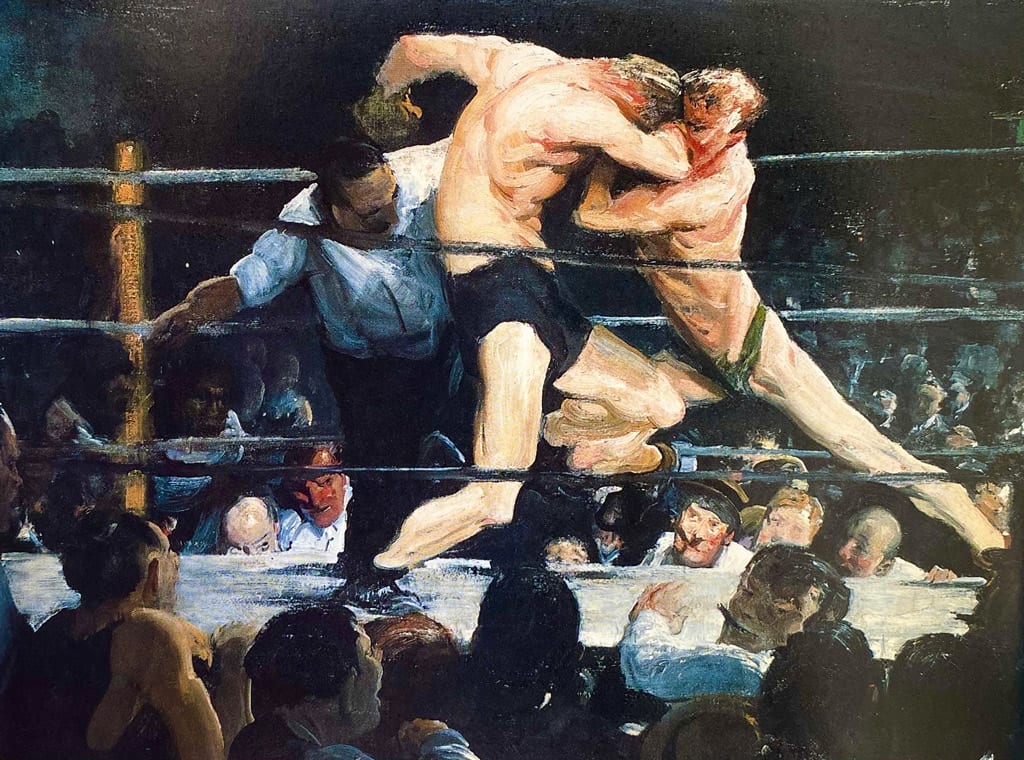 Why is Stag at Sharkey’s much more than a boxing painting? Here are a few reasons:

Boxing may seem brutish. But it makes a masterpiece of Stag at Sharkey’s. George Wesley Bellows uses realistic representation and abstract blurring here. This heightens the excitement around the action. It gives viewers the immediate feeling of recognition. Oh! I know what this is about. There’s so much happening at the center. Boxers and a referee draw us into the contest. But there’s more to the story. It’s not a mere popcorn moment. Sure, boxers fight in the painting. In fact, Bellows often portrayed boxing. It was one of his favorite subjects.

If we gaze into Stag at Sharkey’s, viewers start to notice deeper themes. Turns out it’s not a mere boxing match. The title gives us a starter hint. That’s because stag holds a double meaning. On the surface it regards Stag Night. Those are all male nights out at the club. In this case, the specific venue Sharkey’s. It’s a macho event. Muscles flex. Combat prevails. There’s a testosterone surge to this canvas. At the same time, it highlights the natural grace of bodies in motion. They are like two stags in the wild. That’s how a second meaning of the title enters the ring.

Stags battle brow to brow during mating season. Their antlers clash and sometimes even lock. The foreheads of these fighters parallel that action. It’s a wild moment. This seems animalistic. Viewers get that sense thanks to Bellow’s keen brushstrokes. He gives the boxers sinewy bodies, emphasized with bright white. The image brings to mind the sleek form of a poised stag – ready to pounce.

Blending of the paint obscures the boxers’ human faces. It also gives the impression of speed in the ring. As if the battle happens so fast, we can’t even keep up. This adds an element of thrill to the painting. We see this excitement mirrored in the faces of the men watching the match. The referee’s wingspan gesture at the center adds even more anticipation. The painting pulses with expectations.

Animals and Men – Innocence and Unity

The animal side of human nature often refers to violence. That’s almost a cliché – it’s so common. A boxing ring would be an obvious setting for a commentary on male brutality. With Stag at Sharkey’s Bellows works a more subtle theme. He shielded the fighters’ faces with blurred movement. Their identities stay protected. But we see blatant awe and admiration in spectator expressions.

They’re exposed as the ones with bloodlust at the event. The boxers are prey to this audience. After all, they paid for a beatdown. That’s what they came to see. To the fighters this is a job. It’s payday. Like animals in the wild, they shed blood because of the role they play. They’re emotionless in the ring. While the audience roars with feeling.

Stags are innocent wild animals. They battle in mating season because that’s how they jockey for herd position. It’s a matter of bottom line survival… like a paycheck for humans. There’s a unity in the way stags fight – linked at the antlers. We see this in Stag at Sharkey’s too. The blending of their heads with paint makes them indistinguishable. It’s as if they’re united – one man. The audience holds a unified essence as well. Men blend into each other. We only know they’re different because of their varied gestural stances. Chances are they also aren’t all pulling for the same fighter to win.

But everybody wants a winner. That unites all the painting’s elements: the Sharkey’s audience, viewers, and even the boxers. Nobody wants the match to end more than they do. This oneness transcends our differences. We’re reminded of our own brutality. The painting also points out how boxers are innocent like stags in the wild. These two sides of human nature connect us to animals as well. We’ve all got both an innocent and brutal side. And everybody’s pulling for a winner – no matter which side we’re on at the moment.

American painter George Bellows won’t give us a win, though. He locks us in this split second. We’re wrapped up in the match just like the audience. That’s how Bellows draws on our own animalistic, brutal side. We too want to see who wins. But there won’t be a winner. Instead this pair of boxers blur together in an infinite match. Best part is how Stag at Sharkey’s keeps moving. The whirls of paint animate this fight. So, the battle continues on in our mind’s eye long after we’ve walked away. That lingering desire for a winner helps make this an unforgettable masterpiece.

Why is George Wesley Bellows an important painter?

Bellows epitomized the Ashcan School art movement. This group of painters eschewed painting styles such as French Impressionism. They painted realism in urban settings. The Ashcan movement reflected how life in America shifted at the turn of the century. Before this many popular American painters glorified the American West. But the Ashcan movement portrayed the gritty reality of city life. George Wesley Bellows shined as one of their brightest stars. His work bared the brutal truth of New York City in all its gory glory.

What kind of painting is Stag at Sharkey’s?

This masterpiece fits into the Realism category. George Wesley Bellows was a leader in the Ashcan movement. That was a tight-knit Realism subcategory that burgeoned right before World War I. Painted in 1909, Stag at Sharkey’s illustrated Ashcan themes to perfection: grit, masculinity, and violence.

The most beautiful aspects of this painting draw abstraction into the work. It’s Realism. But that blurring of the faces works like an abstract painting. Rather than clarify the reality of what we’re seeing – two boxer’s faces – they obscure it. This injects movement to the canvas. It also adds meaning that gives viewers a reason to look deeper.

Why were they boxing at the private club, Sharkey’s, and not a sports arena?

Boxing was illegal in 1909, the time of Stag at Sharkey’s. So, men had to sneak into a private club. These worked like speakeasies during prohibition. Although illegal, they made lots of money. This tells you a lot about the Sharkey’s clientele. They loved boxing enough to join a private club and break the law just to see a match. Turns out Sharkey’s was quite close to the studio where Bellows painted. It also gave him the perfect setting and cast of characters for the story he tells in the painting. We can feel their vicious exaltation thanks to his apt audience portrait.

Where can I see Stag at Sharkey’s in person? 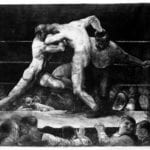 Bellows made two versions of Stag at Sharkey’s. He painted this glorious oil in 1909. You can see it at the Cleveland Museum of Art. This works perfectly because Bellows grew up in Ohio. He also went to Ohio University – where he played basketball and baseball.

The other version is a lithograph he made of the same scene in 1917. It’s got a much softer feeling than the oil painting. But the biggest differences between the two pieces are the coloring and apparent nudity. Bellows puts the boxers in tiny sport shorts for the painting. They seem to be naked in the lithograph.

ENJOYED THIS Stag at Sharkeys ANALYSIS?

Check out these other essays on Realist paintings.

Sister Wendy on Stag at Sharkey’s

See it at the Cleveland Museum

Samuel Dorsky Museum of Art (2001). With My Profound Reverence for the Victims: George Bellows. SUNY Press

Lithograph at the Brooklyn Museum