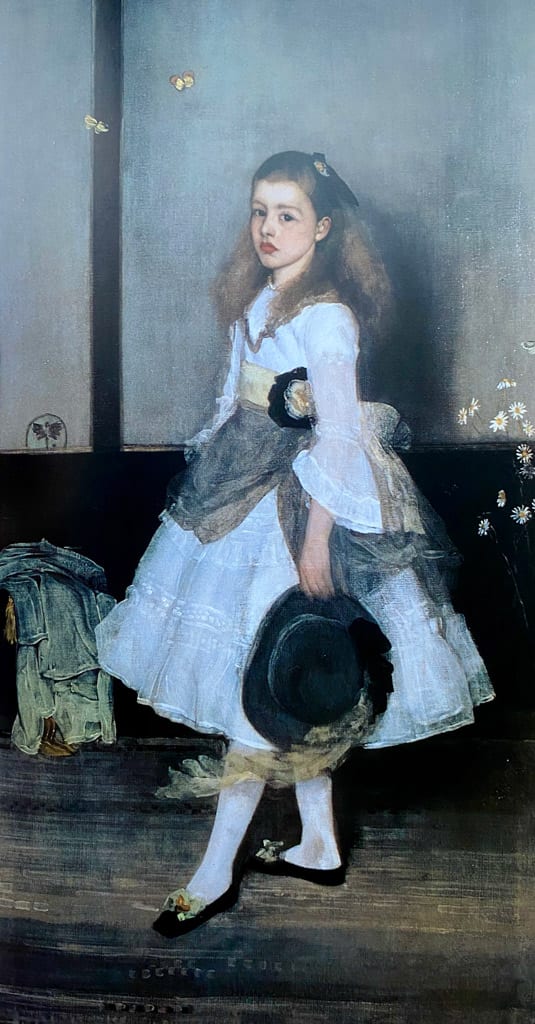 What makes Whistler’s portrait Harmony in Gray and Green Miss Cicely Alexander special? Many things… including:

Perfectionist Whistler made his subjects wait. They posed often without a break. No matter how long it might take for him to get paintings just right. Take Harmony in Gray and Green Miss Cicely Alexander. We see evidence of this picky practice in her pre-teen cranky expression. Whistler was known for shouting, “Don’t move!” at subjects if they relaxed. So, his portraits never smiled. Still this painting holds us rapt in delicate beauty. Whistler enthralls us in a magical story. That’s because the portrait’s not about only a girl. It portrays the wonders of change with key details. As much as James Whistler loved muted tones and colors, he also adored butterflies.

Opposite on the surface, muted colors and butterflies have lots in common. We create muted colors with mixing. They’re changed from their original form into a preferred blend. Butterflies also come from metamorphosis. Whistler often imprinted his own butterfly emblem into his work. He created it out of his initials. Look beside the black stripe on the wall behind Cicely for an example. The art of painting also represents a transformation. Brushstrokes on canvas turns blankness into beauty. But there’s still more changing in Harmony in Gray and Green Miss Cicely Alexander. She hovers at the intersection between woman and child. Her left foot reaches forward. As if with one step, Cicely might shift into womanhood.


Softness surrounds her in a gauzy, silken frock and gentle ruffles. Her delicate face perches above all this fancy fluff – with a frank expression. This mirrors the daisies by Cicely’s side. They jut into the scene with improbable perkiness. Fresh and bright, the daisies seem to appear out of nowhere. They peak into the painting to remind us of youth, innocence, and nature. Though Cicely holds herself like a lady and has red lips to match, she’s a kid. The daisies reflect this in Harmony in Gray and Green Miss Cicely Alexander. The cheerful flowers match both her sash and the swirling butterflies overhead. It’s a fine example of Whistler’s careful color strategy.

Part of the reason Whistler took so long with portraits was his method. He painted in thin layers of muted tones. This always began in grey and brown with a slow build into white and little color. His portrayals stayed spare and muted. Instead of loud colors, Whistler relished the play between shapes. He often dissolved edges of objects into each other to create nuance of form. A fantastic example sits at the back of Cicely’s dress. Her gauze grey overskirt seems to disappear into the dark wall behind the daisies. He performs similar magic with the edges of her hair and the shadowy wall at her back.

Cicely thus blends into the background. She’s part of this place. Still a child at eight years old, Cicely remains bound to it. We see that vulnerability in her eyes. She looks trapped. In fact, this girl’s held against her will. In the Pennell’s book on Whistler they quote Cicely on this topic. She said:

I’m afraid I rather considered that I was a victim all through the sittings, or rather standings, for he never let me change my position, and I believe I sometimes used to stand for hours at a time. I know I used to get very tired and cross, and often finished the day in tears.

It seems that Whistler treated her more like an adult than a child. The depth of emotion in the portrait also makes her seem mature. Cicely’s eyes seem to plead with us. Her look holds more longing than a typical pre teen side-eye. She’s all dressed up and nowhere to go – in a literal sense. In fact, Whistler demanded his distinct idea of what Cicely would wear for Harmony in Gray and Green Miss Cicely Alexander. He had the poofy dress made for the portrait. This picture lived in his mind even before paint hit canvas. Viewers sense his finicky control over the image in the details. Notice how her hair bow, sash, and hat match to perfection.


We can also feel his presence throughout the portrait thanks to his meticulous use of color. Her red lips are like a siren in this muted world. It’s a blatant signal in the painting. That flash of color shines Whistler’s spotlight on her pout. It’s what he wants us to notice and remember most about Cicely.

I’ve also often wondered about the Green in the painting title. The only true green in Harmony in Gray and Green Miss Cicely Alexander is that coat draped behind her. This was Cicely’s home. Thus, the coat was likely Whistler’s. He may have taken it off after warming up at his easel. The American painter Whistler was a notorious control freak. So, it would suit his character to play a primary color role in the portrait. The coat also adds a hint of masculinity to the otherwise dainty and feminine scene. It balances more than mere color. That green coat brings true harmony to this masterpiece.

Why did Whistler title this painting Harmony in Gray and Green Miss Cicely Alexander?

James Whistler often used titles like this. It was his style. For instance, he titled the first painting that made him famous Symphony in White, No. 1: The White Girl. He also painted other Harmony portraits including Pink and Gray (Portrait of Lady Meux) – at right and Harmony in Red Lamplight.

It’s unwise to mind read painters too much. We can only know what they tell us and the facts of what we see. But it’s clear from his many uses of Harmony in titles that Whistler valued this concept in painting. Viewers also see his deft use of blending and blurring edges between objects to create visual harmony. There’s historical irony in this. That’s because Whistler was a well known volatile personality. He plays a cantankerous character in Art History. But Harmony in Gray and Green Miss Cicely Alexander is only one of his many harmonious paintings.

What kind of painting is Harmony in Gray and Green Miss Cicely Alexander?

This masterpiece combines elements from several painting categories. But most of all, Harmony in Gray and Green Miss Cicely Alexander stands out as one of Whistler’s best portraits. A great lover of Japanese art, he included Anglo-Japanese painting elements here too.

Whistler also painted this during the friendship dissolution with Gustave Courbet. So, viewers see hints at his shift away from Courbet’s realism in this portrait. There’s a smudgy resonance that adds mystery to Miss Cicely. Still, Whistler gives us vivid, real butterflies and daisies. They ground the work to balance its often gauzy composition.

Who was James Abbott McNeill Whistler? 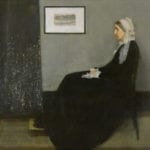 Whistler was complex. He’s most known for two things: wonderful paintings and a challenging personality. This man personifies a yin yang mix of opposites. That’s because as a painter he made simple, harmonious arrangements of color and form. While interacting with others, though, Whistler created conflict left and right.

He’s most famous for the painting known as Whistler’s Mother (at right). But it’s true title is Arrangement in Grey and Black No. 1. In many ways this famed masterpiece mirrors Harmony in Gray and Green Miss Cicely Alexander. Muted tones, dainty details, and a morose female subject – for instance. But the portrait of his mother has also become an emblem for American motherhood.

Though an accomplished painter, Whistler may be even better known for his temperamental friendships. He fell in and out with some of the best painters of his time. These included the French masters Gustave Courbet and Édouard Manet. His battles with Courbet even impacted Whistler’s painting style. For instance, he eschewed Courbet’s realistic style after they fought over the same woman.

What are some reasons for Whistler’s bad reputation?

Here’s a mere sampling of the many:

Check out these other essays on Portraits.

About the Whistler butterfly