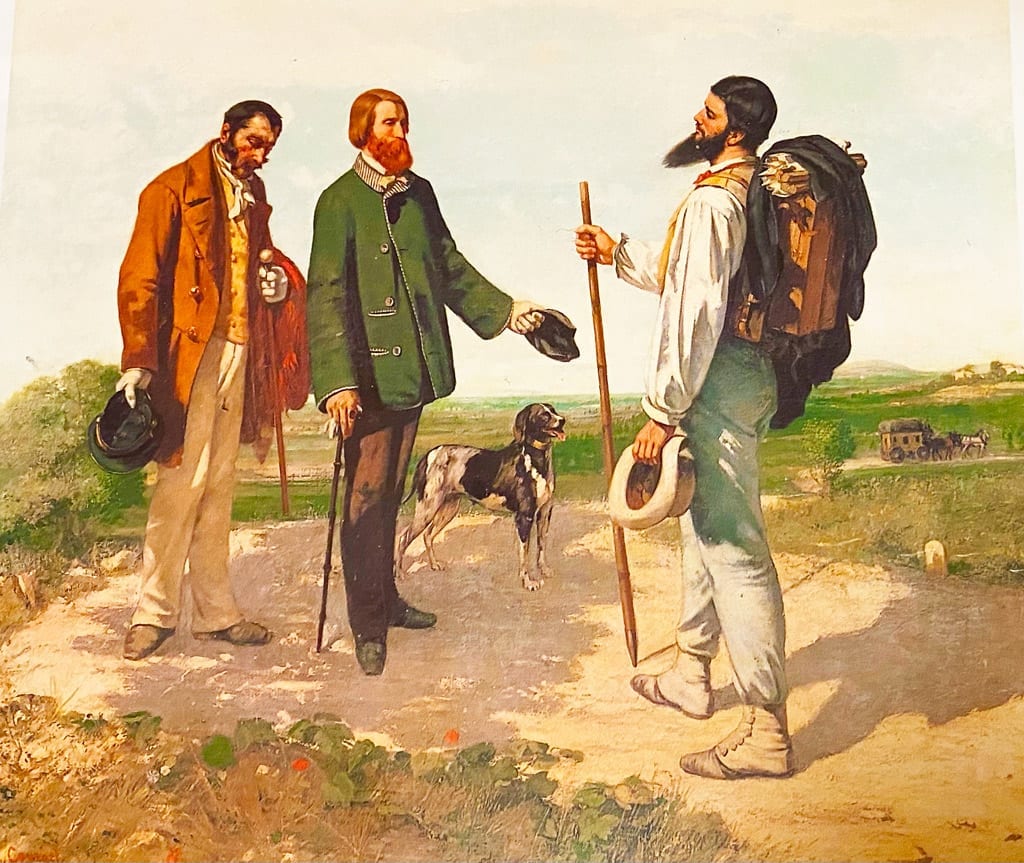 Gustave Courbet and his painting Bonjour Monsieur Courbet were kind of a big deal. Here’s why:

Gustave Courbet believed in two types of people. There were artists, like himself, and bores. He didn’t keep such opinions to himself. So, it’s no surprise that the painting Bonjour Monsieur Courbet created a ruckus. This masterpiece, also called The Meeting – La Rencontre in French, teems with binaries. For instance, Courbet’s critics gave this piece a different name. They liked to call it Fortune Bowing before Genius.

After all, Courbet painted this threefold portrait against his will. His patron, Alfred Bruyas, wanted a piece to show himself with his favorite artist. So, the miffed Courbet painted Bruyas in a humble stance. He also stuck an uptight valet between them. Service thus separates the money from the art.

Telling details reveal the painting’s story. From beard length, to gloves and walking sticks – Courbet needs us to know he’s the special one. He’s got the longest, darkest, and most aggressive beard. It points at the others with imperious flair. He’s also the only one with bare hands. His patron, Bruyas, wears white aristocratic gloves. These protect the moneyed class from dirt to keep their hands clean. This works in both the literal and figurative sense. Artists get down and dirty in the real world, Courbet reminds us. They don’t just know how things get made. Artists make them.

That’s why the valet has one glove on and one held in his hand. It’s not only to signify the shaking of hands with the artist. The single glove also works as a symbol. Servants live in both worlds. Sometimes they must get their hands dirty. Other times they represent their boss and maintain appearances.


The valet also works as a middleman with the walking stick. Bruyas holds his stick high. It’s more than a foot above the ground, as if he’s not aware if its purpose. Courbet has a message in mind with this detail too. Not much point to a walking stick if you’re carried around most of the time. And if Bruyas needs to lean, he’s got a man for that.

His man leans a bit on his stick. But not in a true sense. It’s more like a prop, perched under his palm. Courbet, though holds his stick firm – a stake in the ground. That’s because the painter sees himself as a man of the real world. That backpack holds all the tools of his trade. This frees him to roam around as he pleases – footloose.

Courbet didn’t want to create Bonjour Monsieur Courbet. It was only at the behest of his rich patron that he made it. The resentment shows in the way he and Bruyas seem to be different species. Best part is, Courbet ratcheted up his artistic skill and technique. This emphasized his reliance on artistry rather than money, which Bruyas represents.

Whether he’s trying to prove it to himself or to viewers doesn’t matter. It shines through. Courbet’s presentation of himself as a free spirited man was actually defensive posturing. No matter how much hippie gear he painted on himself, Courbet was the least free-spirited of the trio.

Painting a simple French countryside and an everyday encounter was unusual in 1854. Most pieces portrayed religious narratives or major historical events. Bonjour Monsieur Courbet instead elevated a single human spirit. In this way, it’s radical. The subject matter fits into both portrait and landscape categories. Gustave Courbet loved his countryside. It shows in his hot pink wayside flowers at the front of the painting as well as the languishing fields behind. He draws our attention to the particular beauty of this place.

The painter didn’t only portray his own handsome strength. The land he loved also got the spotlight. It seems to stretch infinite at the back of the canvas – far beyond their simple greeting. This effect gives the work a sense of time and place that stays with viewers. The trio seem to be meeting by chance. It’s a brief Good Day and How do you do? happening here between men. But behind them lies a vast land with houses and farms, a whole world of beauty and artistic potential. It all lay in wait for the talented traveler with his knapsack and strong stance.


With his stick planted like a flag, confident and tall, Courbet claims this land his own. He wanted this painting to be about the landscape. So, the painter stretched it back as far as the eye can reach. Courbet was often called “The Great Realist” and held this tight to his breast as his fondest badge of honor. He said his greatest love was “genuine truth”. So, yeah. Courbet was a bit dramatic. But he saw himself as down-to-earth. That’s one of the reasons he’s so charming.

Part of him was self aware though. In Bonjour Monsieur Courbet his head tilts – condescending to his adoring patron. He also painted Bruyas’ head bowing to him. The flat affect of Calas, the valet also shows us his attitude. These were there faces in that moment. But it’s also likely they were the prevalent attitudes they held with each other. Alfred Bruyas admired Gustave Courbet, who cared for his money. In the grand scheme – the macrocosm of their relationship – this was true. It also frames the dynamic in this microcosm of a painting. That’s one of the many signs this wonderful work is a masterpiece. With one moment in time, it reveals truth about the relationships it portrays.

Where can I see Bonjour Monsieur Courbet (The Meeting) in person?

The scene in Bonjour Monsieur Courbet shows the painter walking toward the French city Montpellier. This is where the painting now lives in the Musée Fabre. It’s a treasured place in French culture and underwent a $73.73 million renovation in the early 2000s. A visit slips you into the history of French art like fine silk pjs before bed. European cultural refinement at its pinnacle.

What kind of painter was Gustave Courbet?

Above all else, Courbet obsessed over portraying reality. He was a notorious nonconformist in the artistic community. That’s because Courbet wanted to show concrete realism in his work. At this time the most popular paintings had religious themes. They were also romantic in style. Courbet was defiant in his subject matter as well as his style. He painted secular art with as much depth and sincerity as any religious painting. Bonjour Monsieur Courbet sets a stunning example of this in action.

As an artist, Courbet was also known to make a fuss. For example, at the 1855 Universal Exhibition he created his very own pavilion. He entitled this special Courbet-only section Le Realismé. This spotlit his works. It set them apart as distinct from all the other art at the exhibition. Courbet said he did this because the space allotted to him was unsatisfactory. This cranky character trait might seem a bit much. But it worked for Courbet. He understood that any publicity is good publicity..

Why is Bonjour Monsieur Courbet (The Meeting) an important painting?

There are several significant aspects in this and other works by Courbet. Most important – it sparked a new realm of realism in France. He was an anti-intellectual. This made him a very different sort of French Painter. In fact, Courbet saw himself as above and beyond the mundane “bourgeois” perspective of society. He wasn’t interested in creating civilized art. Gustave wanted to show us what was real. At this time in art history that was a rarified conviction. Romanticism reigned in the mid-1800s. They call Gustave Courbet the Great Realist because he dared to get real on another level. Bonjour Monsieur Courbet (The Meeting) sets a sublime example of this at work.