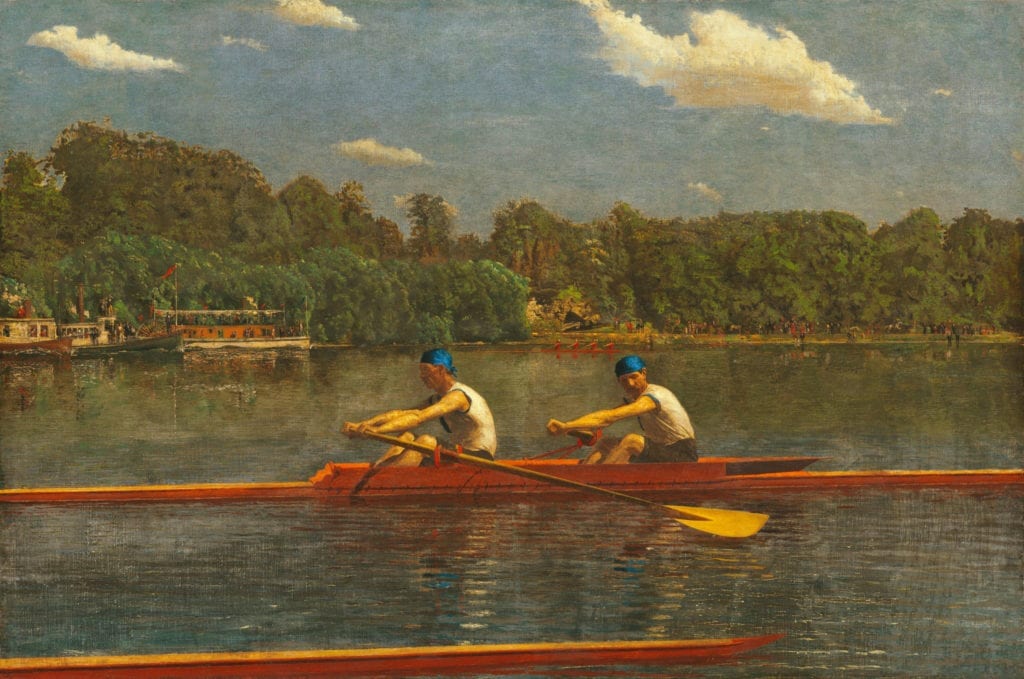 This investigation of the Thomas Eakins painting The Biglin Brothers Racing includes:

It’s hard to believe Thomas Eakin’s painting The Biglin Brothers Racing dates back to 1873. Point and click cameras weren’t yet invented. So, this action’s a straight shot from Eakins. He had to be there to capture a split second. That’s only one of the wonders at work in this piece. A striking clear portrait of a moving moment in oil paint. It’s a marvel of action and atmosphere. Thomas Eakins planned this race day portrait ahead of time. Then Philadelphia weather brought challenges. It would have been hard enough to capture this race on a sunny morning. Turns out rain held off the scheduled contest until early evening.

This urgent situation may account for some of the painting’s palpable tension. Thanks to that, a thrill runs through The Biglin Brothers Racing. Careful composition gives the painting this competitive charge. For instance, the brothers’ boat edges out both sides of the canvas frame. An opponent boat peeks into the bottom corner halfway. That’s how Thomas Eakins creates suspense. We’re mid-race. The brothers row – paddles in the air. At the moment, they’re in the lead. But this could change any second. So, the painting holds us spellbound in anticipation.

A resonant stillness works in concert with action. The water’s sleek gloss contrasts with the grit of a heart-pounding race. It’s a remarkable part of human experience – such sensory duality. For instance, many New Yorkers, including myself, remember September 11, 2001 two ways. Of course, the day erupted in chaos and tragedy. But before these horrific events, our Manhattan sky was striking with a brilliant and rare cloudless blue. The weather was notable perfection. The Biglin Brothers Racing presents this same sense of opposite realities in tandem. It creates artistic tension and also grips our attention. The somehow still, gleaming water only amplifies how critical the rowers’ race feels.

We see how much the race matters in the brothers’ parallel bodies. Their arm muscles move in precise tandem – like machinery. This Eakin’s work sets a keen example for a hardworking title. That’s how we know they’re siblings. It also adds a bit of extra meaning to the piece. After all, brothers symbolize sharing. These two share a boat, the same uniform, and all the stakes. Family makes the ultimate team. They win or lose together – as one entity.

But who am I kidding? There’s no losing here. This is a classic American scene. It’s a portrait of winning. Competitive confidence defines traditional U.S.A. spirit. The Biglin Brothers Racing portrays the core of this particular America. Eakins summarizes the sport with a split second shot. In itself, this stands out in the realm of oil painting. Still, there’s more. Each brother’s stance represents a coin side of victory. In the bow seat, Barney Biglin glances like a scout, cautious and thoughtful. While the stroke-seated brother, John, laser-focuses into the race. His body flexes at the ready.

The brothers won this race. But they weren’t the only winners on the river that evening. Eakins stood riverside, sketching the scene. He never touched paint to canvas during the race. Yet Thomas Eakins caught the essence of a champion in this piece. He somehow took a snapshot using the slowest format – oil paint. That’s the profound impact of his savvy sketching in action. A master artist wields all the trade tools like a magician. The Biglin Brothers Racing reveals how a sketch becomes a masterpiece.

Who are the two men in The Biglin Brothers Racing painting?

John and Barney Biglin were exceptional pro rowers in 1873 when Thomas Eakins painted this. The brothers were at the pinnacle of the sport. This fact adds even more impact to the portrait of winning. The painter grips us in suspense. He portrays a keen competitive moment. That’s how Eakins shows the brothers’ victory – in medias res. They did, in fact, win the race, as expected. It’s most poignant to show this struggle in the middle rather than a finish line. This masterpiece thus continues to hold viewers captivated in their peak performance. It represents America’s competitive, sporty spirit.

Why did Thomas Eakins paint The Biglin Brothers Racing?

Eakins was a rower. He grew fond of New York’s Biglin Brothers as models and painted them in at least seven works. Some portrayed them as individuals. Other pieces paired them together. The brothers were in peak condition and exceptional pro athletes. So, they made wonderful models. Also, Eakins was a sporty guy with sporto friends. He liked to paint big winners in his wheelhouse.

But there’s more to it. He also studied painting at the Ecole des Beaux Arts in Paris. They taught a rigorous curriculum in nude figures. Eakins thus developed an appreciation for such portrayals. He preferred to paint bodies as close to nude as possible. Rowing is, after all, a sport with little clothing. Later in his career, Thomas Eakins was fired from the Pennsylvania Academy of the Fine Arts. They removed him for insisting on nude classroom models.

Where can I see The Biglin Brothers Racing in person?

Mr. and Mrs. Cornelius Vanderbilt Whitney gave this masterpiece to the National Gallery of Art in Washington, DC. Although not currently on view, this wonder’s available as a reproduction in their online gift shop in four sizes. Also available framed, please note, this work’s on paper. It’s not a literal reproduction of paint on canvas. Still, this piece would be perfect for any wall that craves an all-American vibe.

Why is Thomas Eakins an important painter?

First and foremost, Eakins was a skilled, thoughtful painter who captured late 19th century America with grace. His hunting, rowing, and sailing paintings pulse with a pure heart. It beats to the tune of a U.S.A. cheer. But Eakins also showed notable insight. In a well-known letter to his father after art school, Eakins wrote this oft-quoted passage.

The ” big artist ” does not copy nature but “steals her
tools” in order to make a “canoe of his own smaller
than Nature’s” but with which “he can sail parallel
to Nature’s sailing. ” If an artist ever “thinks he can
sail another fashion from Nature or make a better
shaped boat he’ll capsize or stick in the mud & nobody will buy his pictures or sail with him in his old tub.”

Here he points to the crux of creating art from the natural world. Nature will always beat copies made by mortals. Know your place, he tells fellow artists. One can only ever be a mere thief of nature’s tools. This humility shows Eakin’s appreciation for the power of nature. His respectful point of view also grants sublime realism to his work.