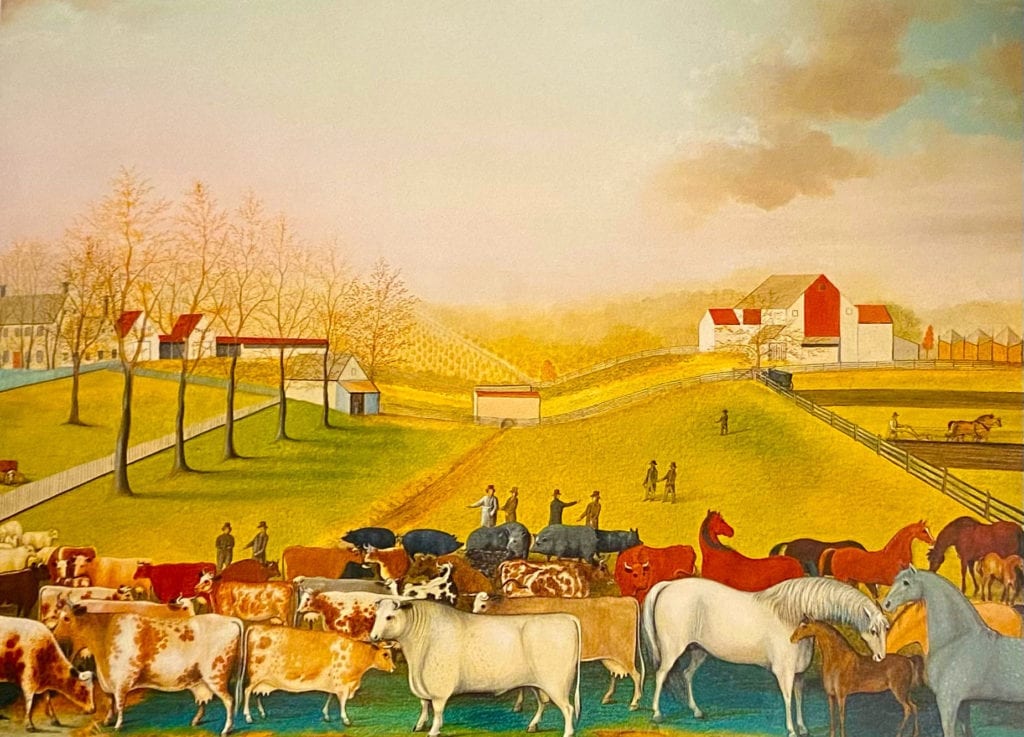 Edward Hicks paints neat and tidy artworks. It’s easy to recognize his trademark style in The Cornell Farm. Hicks obsessed over creating order in his paintings. Many art historians attribute this to a yearning within to quell his inner demons. But it may have been quite the opposite. Completely self-taught, Hicks could have adopted this perfectionism to prove his artistic merit. Thus, it wasn’t his animalistic urges Hicks wanted to quash – but his amateurism. Turns out, he accomplished exactly this. He created more than one masterpiece. American painter Edward Hicks achieved this with a meticulous attention to detail. He also charms viewers with his bewildered and tame beast depictions.

The Cornell Farm reeks of control issues. They point to a specific theme here. Humanity’s need for dominance over our environment. That means animals, structures, and landscaping. His beasts seem as tame as domesticated dogs. The painter’s grey-coated men point directions here and there – bland as can be. Boring – but in charge. And the trees line up like soldiers ready to abide the will of men.

Still, the painting also reminds us that human power over our domain has limits. We see that in its glorious sky. Subtle, feathery, and filled with playful, pastel gusts – it’s free. Unlike any other aspect of this masterpiece, the sky reaches into an untamed vastness. With a blurred beginning, the atmosphere has no end point. It represents the beauty of wildness – beyond human control and comprehension.

A glowing quality of light imbues The Cornell Farm with warmth. It balances the tight animal rows, frigid landscaping, and sharp buildings. This farm presents humanity’s influence as a strict disciplinarian. Only nature’s allowed to play here. Everything else is far too busy keeping tidy and true to form. There’s no fun in that. So, sun and sky bring the party. Light radiates through the painting’s middle like a spilling bucket of sunshine. This adds a delightful and bright feeling to the farm. It seems like a happy place. That’s thanks to sunlight, though – not humanity.

Heavenly Light from Above

Edward Hicks was a Quaker Minister as well as an American painter. He ping-ponged back and forth between these two sides of himself. This parallels The Cornell Farm painting’s tension. That’s because Hicks held an expertise. He was a trained Minister and had attended school at length to practice in his Quaker community. This was his legit ticket to influence. His intellectual and spiritual calling didn’t suffice for Hicks, though. He wanted to paint. So, though trained for high-minded service, Edward Hicks got his hands dirty.


He didn’t waste any time, either. Hicks never even took an art class. Painting called to him loud as the Lord. But we can see his Quaker influence in the work too. So, it went both ways. In fact, Edward Hicks represents many dualities. His close cousin, Elias Hicks, divided the Quakers into two separate communities. Edward also played a part in this dramatic split. He thus earned a reputation as a bit of a hothead. But when his paintings drew more attention to the Quakers, Edward Hicks became an icon. Turns out, his painting gave him a more esteemed position among them than his ministry.

Many Hicks paintings portray Quaker themes and stories. But some show less literal influence. The Cornell Farm, for instance isn’t a Quaker place. It wields a sense of heavenly providence, though. The simplicity and humble toil of man and beast beneath the benevolent glory of that sky… well, it feels pretty darn Quaker. This portrays an orderly, cooperative, and pious life. Edward Hicks gives the beasts individual faces and the men only jobs to do. This abides the core Quaker values. SPICES is an easy way to remember their tenets. The letters stand for Simplicity, Peace, Integrity, Community, Equality, and Stewardship.


These qualities resonate through the painting’s human aspects. They present a tidy and peaceful setting on earth. For an element of excitement, viewers need to look up. Far above humanity’s influence we see the real action at The Cornell Farm. The skies whirl with activity, light, and mystery. Hicks was a naive Folk painter. He taught himself painting techniques. That’s one reason why this majestic sky impresses so. Edward Hicks captured the transparent quality of atmospheric layers. He positions the palest blue beside clouds that seem to float before us. Best of all, Hicks made it look effortless. With his artful washes of color, the sky sweeps us away in a mist. This makes The Cornell Farm a true American masterpiece.

Where is The Cornell Farm portrayed in the Edward Hicks painting?

We have Edward Hicks to thank for the answer to this question. Schooled in sign painting, he inscribed the bottom of the canvas. Here Hicks gives us all the location facts.

An Indian summer view of the Farm & Stock OF JAMES C. CORNELL of Northampton Bucks county Pennsylvania. That took the Premium in the Agricultural society, October the 12, 1848 Painted by E. Hicks in the 69th year of his age.

What kind of painting is The Cornell Farm by Edward Hicks?

The Cornell Farm fits into both Naive and Folk Art categories of painting. Naive Art’s exactly what it sounds like. Artists in the Naive category never went to art school. They lack the traditional training most professional artists have. When a trained artist creates in this style, it’s often called Psuedo-Naive or Faux-Naive Art.

Folk Art is a more complicated category. Some define it as art that’s decorative or utility. So, it can be used for everyday or ceremonial reasons. But the key is that it’s useful in some way. This is why we often see quilts and kitchenware in Folk Art exhibits. But there’s more to Folk Art. It’s community-based and handmade. Also, it harkens to tradition and speaks directly to its culture and social origin. Folk Art’s the ultimate expression of the idea: By the people and for the people.

On the matter of subject, it’s also an Animal and Landscape painting. These were the artist’s favorite. His tender animal portrayals reveal deep fondness. The Cornell Farm shines brightest, though, as a landscape. The deft handling of that golden blend between farmland and sky takes true mastery. It shows that years of painting taught the unschooled Hicks more than many have learned in art academies.

Why was Edward Hicks an important painter?

Edward Hicks plays an extraordinary role in American art history. He wasn’t born a Quaker. But Hicks will always be lauded as an iconic Quaker painter. His family suffered great loss in the American Revolutionary War. Their tragedy continued when one year old Edward’s Mother died in 1781. A Quaker family then adopted the baby Hicks. So, he grew up in the Quaker community and eventually became a minister.

He was a popular pastor. People flocked to hear him minister. And he was the real deal. Religion was key to Edward Hicks – his primary concern. That’s why he painted so many works about his Quaker beliefs and values. In fact, Hicks was obsessed with this. He painted more than sixty versions of his work Peaceable Kingdom. This fantastic painting most exemplifies his Quaker ideals. But these precepts are evident in every Edward Hicks painting.

His work stands out in American art history thanks to this fixation. That’s why he remains such an icon in the Quaker community. This beloved minister broadcast his message wider than a pulpit ever could. All it took was a paintbrush and a whole lot of Hicks brand passion.

ENJOYED THIS The Cornell Farm ANALYSIS?

*The Cornell Farm at The National Gallery