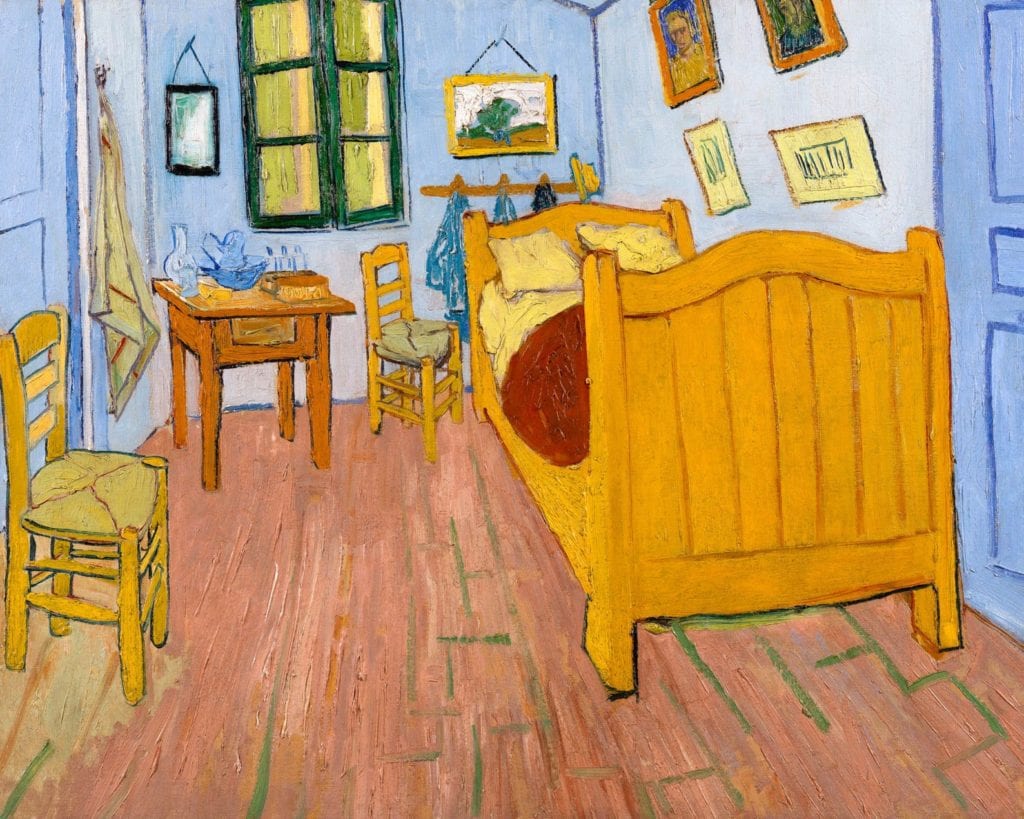 Acid colors and electricity quiver through objects in Van Gogh’s Bedroom in Arles. With our comfortable distance, it’s a pleasure to bask in Van Gogh’s sickly greens and odd figures. After all, we aren’t stuck in his mind. That’s why we can appreciate this wonder. It seems unthinkable now. But Van Gogh wasn’t so aware of his deteriorating mental state at this time.


His illness now echoes through art history – a loud and clear bell. Still, when he was stuck inside this state, Vincent lacked understanding. We know this thanks to his painting like Bedroom in Arles. Van Gogh showed this room to his family – a proud papa. Truth is, it looks more like a prison cell portrait than a badge of honor. The room reveals his trapped state of mind.

Bedroom in Arles closes in on viewers with an odd skewed perspective. Closed windows and doors on all sides give the space an airless quality. Putrid green floorlines hint at a noxious odor. A towel hangs on the back of the door – a sad drooping flag. It can’t wave in such a stifling room. That’s not exciting electricity making the objects quiver. It’s anxiety. There’s an instability to the objects. The water pitcher seems unstable. Framed pictures look ready to leap off the wall. It’s more sick room than sanctuary.

What’s the Story Behind Bedroom in Arles?

The painting’s entitled Bedroom in Arles as part of a series. There are three paintings with this title where Van Gogh captures his bedroom. He gave this painting a different name, The Bedroom. It’s as if this was the only bedroom that mattered to Vincent. That’s because it represents his first (and only) taste of true autonomy. This particular version was his initial take on the room. But there are many similarities among the trio of paintings. The figures and composition appear about the same. Even the colors are parallel. But the other two are more muted than this – Van Gogh’s first painting of his bedroom.

We can tell the three apart from colors alone. But also, Van Gogh used different pictures in each one. He framed his own works on the wall above the bed. This is one of many indicators that Van Gogh painted this room as a source of pride. It held primo significance to him. That’s because it was part of his special house in Arles.

The entire Yellow House where he set up this bedroom meant a lot to Van Gogh. He saw it as a fresh start; full of opportunity. In fact, one of the doors in Bedroom in Arles led to another bedroom that was to be Paul Gauguin’s. Van Gogh planned to make an artist colony of this colorful house in the country. He’d found Paris exhausting and believed the country was restorative. In his hopeful mind this place would calm and relax him.

But Vincent was mistaken. It turned out Paris wasn’t the true source of his angst. No matter where Van Gogh lived and who joined him, anxieties remained. They were in his head. No amount of geographic change or ally recruitment could quiet his mind. Gauguin moved in during October of 1888. Only a few months later, in December, Gauguin felt tension growing with his Dutch painter friend. When he told Vincent he planned to leave the Yellow House, it triggered him. Van Gogh then threatened Gauguin with a razor.

Surprise, this response didn’t compel Paul Gauguin to stick around. He packed and left right away. Distraught, Van Gogh then used that same razor to cut off his own ear. The painter wrapped it in newspaper and kept it close. That night Van Gogh visited the red light district and brought his amputated ear to show a friend. He was thus hospitalized.

Sadly his art colony dream turned out to be mere fantasy. After cutting off his ear, Vincent forgot much of his stay at the Yellow House. But Van Gogh’s paintings from this time keep alive some of what he saw. They’re a colorful peek into his fretful mind. For instance, Bedroom in Arles reveals Van Gogh’s internal anxiety. His anxious affliction registers to viewers through details. Its trembling, slanted figures seem unstable. The water pitcher looks like it could tumble off the table any minute. Bilious green seeps through floorboard cracks. The mirror reflects blurry chaos. This was his mind’s eye at the time – warped yet colorful.

Bedroom in Arles also feels bright and clever. Vincent held hope and desire as tightly as his paintbrush at the phase of his life. He dreamed and painted about peaceful respite from anxiety. That’s why even though it’s clear Van Gogh struggled, his work’s not a bummer. From his writings we know Van Gogh sought comfort in painting. But his work’s done more for viewers like us than it ever did for him. We can sense his anxious longing in paintings like Bedroom in Arles. That tension’s part of what makes Van Gogh’s work so compelling.

What role did Vincent’s brother, Theo, play in his life?

The Bedroom in Arles phase of Van Gogh’s life illustrates Theo’s role quite well. His brother was Vincent’s lifelong supporter. Theo wanted Vincent to succeed in his artist colony goal for the Yellow House in Arles. He even paid Paul Gauguin’s travel expenses so he could join Vincent there. This was to encourage Vincent’s vision. In fact, Theo assisted Vincent in many art endeavors – not just his crew of compatriots. That’s because Van Gogh’s goals gave Theo hope for his brother’s otherwise ailing health. He wrote a note to Vincent saying:

So Gauguin’s coming; that will make a big change in your life. I hope that your efforts will succeed in making your house a place where artists will feel at home.

Theo sent Vincent this message in an October letter of 1888, the same year of this painting.

Is the Yellow House still standing in Arles?

Sadly, no. During the second World War it was bombed in an Allied raid of 1944. Van Gogh’s bedroom was destroyed. Gauguin’s room had less damage. But the Yellow House wasn’t salvaged. We’re lucky to have the trio of paintings Bedroom in Arles now to hold this place in memoriam.

Where did Van Gogh live after he left the Yellow House in Arles?

After Van Gogh cut off his ear he stayed at Hôtel-Dieu hospital. Even after released he’d sometimes return to the hospital at night. For a short while he painted at the Yellow House during the day and slept at the hospital. Meanwhile the people of Arles circulated and signed a petition stating they considered Van Gogh “dangerous”. So, Vincent checked himself into Saint-Paul-de-Mausole asylum in Saint-Rémy-de-Provence.

Where can I see Bedroom in Arles in person?

All three Bedroom in Arles paintings are on exhibit in the Van Gogh Museum – Amsterdam. This wondrous museum is currently open. If you’re lucky enough to visit Amsterdam, it’s a vibrant and enlightening experience you won’t forget. But an online visit will brighten your day as well. It’s not only gorgeous artworks and riveting stories. They have an exquisite online museum store with vast Van Gogh treasures.

ENJOYED THIS Bedroom in Arles ANALYSIS?

Check out these other essays on Dutch painters.