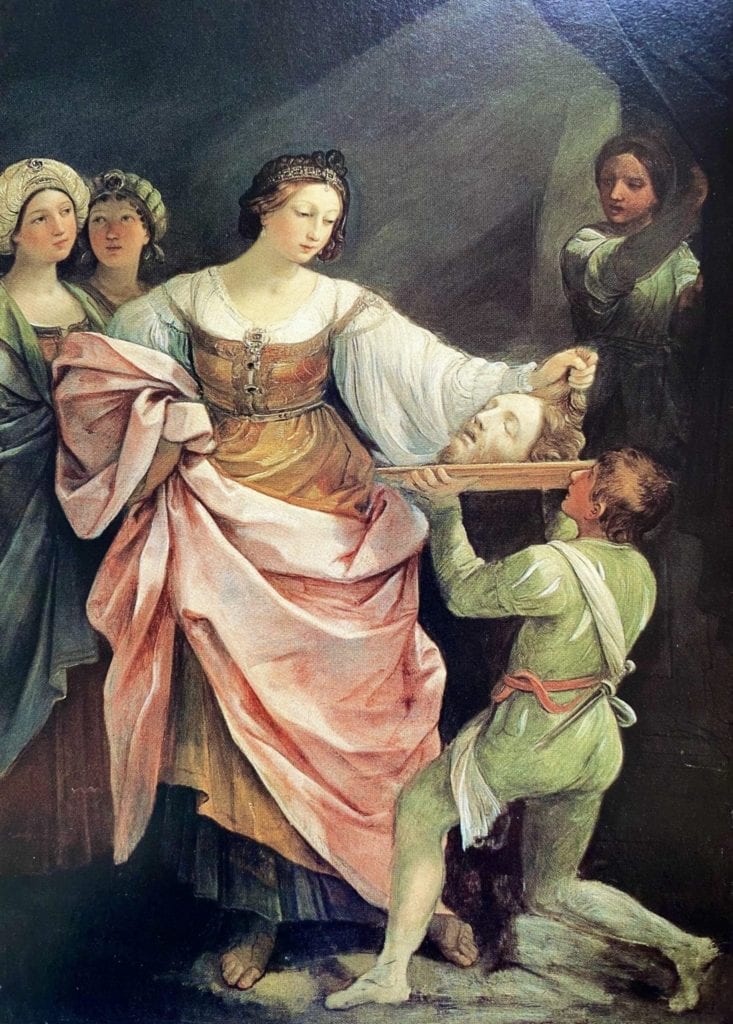 The underlying story makes it macabre. Salome’s beauty tempts her stepfather. So, King Herod of Judea asked her to dance for him. The Princess did so out of obligation. But she loathed the drunken creep. As reward the King offered Salome whatever she wanted.

Salome’s mother then obliged her to ask for St. John the Baptist’s head. This shows more loathing. The Queen felt judged by the Saint. She thus wanted him dead. Salome felt obliged to her mother. So, she asked King Herod for what her mother wanted – St. John’s head. In this scene we see the result. The elegant Salome registers cold loathing for her own corrupt act. We see this in the way she pulls at her skirt. Salome’s pulling away in disgust. But she also seems obliged to look at the face of death before her.

Salome clutches St. John’s hair while also grasping at her glorious pink dress. It’s as if the Princess forces herself to look at what she’s done. Her stone expression shows that Salome’s gone to the dark side. This shift may have happened when she did the sexy dance for her stepfather. Or her heart could have frosted into ice when she asked for the Saint’s beheading. But Salome with the Head of St. John the Baptist feels like the moment. She’s turned cold and a bit trivial now next to the Saint’s head. After all the dead Saint has a far more profound coldness. His expression also brings a beautiful peace to an otherwise provocative scene.

At first it may feel like a painting of only this protagonist pair. Guido Reni draws our attention to focus on the Princess and her victim. But six people populate this piece. It’s a dynamic triangle of emotion. Each face registers a different expression. That’s how Guido Reni tells a complex story in Salome with the Head of St. John the Baptist. Viewers experience the tragedy of the Saint’s murder from several points of view. These six sets of eyes give us perspective through Reni’s. Of course, at center we have the story’s plot – a riveting tale of this heartless Princess.

The closed eyelids of St. John the Baptist bring a calm humanity to his pallid complexion. He’s paler than porcelain. Still, he seems more human than the Princess. Her face, though beautiful, reads dead cold with its empty expression. Salome with the Head of St. John the Baptist seems heartless. Saint John’s dead in body. But she’s corrupted to the core and beyond redemption. According to the Bible – where this story originates – that’s worse. After all, he’s a Saint. That’s second only to Pope when it comes to Christian clout. He’s risen above a mere body to become legend.

St. John’s face dwell in the peace after death – rather than trauma or even strife. Guido Reni presents his noble head without the fear death usually brings. The Saint thus rises above his tragic fate. He’s central to the story, even as Salome draws our attention with her external beauty. She’s still got a body, sure. But her soulless act speaks louder. That’s why the witnesses with her register disdain even as they serve her.

Two ladies behind the Princess hold aggrieved composures. One looks at Salome with judgement. The other can’t bear the sight. So, instead, she looks into her judging friend’s face – stunned. If these two want to keep their jobs, they’ll now have to serve a murderer Princess. That’s not just awkward. It’s frightening.

The other two onlookers are more active participants in the painting. A boyish page presents St. John’s head on a platter, humble and awed. No doubt he’s wondering how his royal messenger job got so dark. Meanwhile, a maid pulls back curtains to illuminate the scene. So, sun shines in to light the moment with a gentle sweep of truth.

Still, beneath Salome with the Head of St. John the Baptist a frame of chilly darkness looms. This Princess must live with the reality of her deed now. That’s why the painting’s moment feels profound. Italian painter Guido Reni delivers us a portrait of accountability here. Salome faces her corruption’s consequences. No matter how pretty she appears, her future prospects look bleak.

Salome with the Head of St. John the Baptist – FAQs

Where can I see Salome with the Head of St. John the Baptist in person?

This life-size portrait of a Bible story sits in the Art Institute of Chicago. Breath-taking thanks to its macabre story and enormous size, Reni’s painting will move you. But there are many sublime reasons to visit AIC. Paintings there include the extraordinary A Sunday on La Grande Jatte by George Seurat, Approaching Storm by Eugene Boudin, and the classic American Gothic by Grant Wood.

What kind of dance did Salome do for her stepfather King Herod?

What was the painter Guido Reni known for?

Reni was a successful Bolognese painter in his lifetime – known for his glorious frescos. His work was also a bit controversial after death. That’s because many of his works, including Salome with the Head of St. John the Baptist may appear unfinished. For instance, the rough, sketchy quality of the page’s bent legs raise this question. Art historians have compared these legs with the polished perfection of Salome’s fine features. They’ve thus wondered aloud if Reni planned to return to this masterpiece for further refining.

What did Salome do with the head of Saint John the Baptist?

This question shows how Salome with the Head of St. John the Baptist works as a great painting. Viewers often wonder What happened next? about artistic masterpieces. It’s the sign of a compelling narrative piece. In this case, we’re in luck. The actual Bible story answers for us. After presented with the Saint’s head, Salome took it to her mother, the Queen.

ENJOYED THIS Salome with the Head of St. John the Baptist  ANALYSIS?