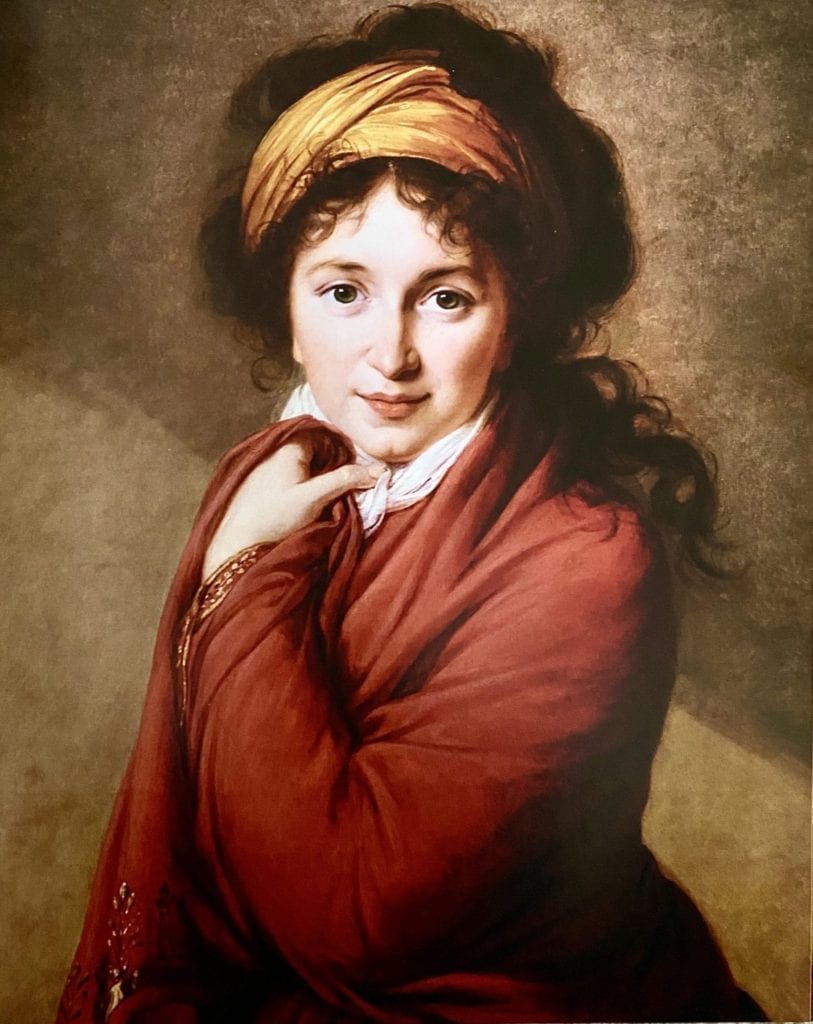 This Portrait of Countess Golovina shows why Élisabeth Louise Vigée Le Brun was a beloved artist. Her artistry extended deeper than paint and canvas into lasting camaraderie. Élisabeth captured the friendly essence of even the haughtiest aristocrat. In fact, Le Brun was Marie Antoinette’s favorite portrait painter. They were also best buddies.

Friendship was key to Le Brun’s success. She bonded with aristocrats and royalty far above her status. This was no small feat in the late 18th century. Art historians sometimes say Élisabeth flirted her way through life. It’s true. Le Brun capitalized on her charisma and looks. But she’s no less magnificent a French painter.

We see Élisabeth’s people skills shine through Countess Golovina’s eyes. They sparkle with vigor. She seems happy and strong. Though Varvara Golovina holds her cape against her cheek, it’s not a coy move. She’s not naive. In fact, this move seems more welcoming than innocent. The Countess isn’t quite seductive. But she’s got a powerful grip on us with her gaze. She’s robust. The soft drape of her curls balances this hardy vibe. So much about Countess Golovina reads velvety feminine.

But she also gives off an impression of vital tenacity. It’s as if she came in from chopping wood to pose for this portrait. Bright cheeks, autumn colors, and a wry smile give her a glow. She’s beaming without teeth. That’s not an easy feeling to infuse into a portrait, even with a big grin. Élisabeth gives Countess Golovina an air of mysterious glee. She achieves this without cliché symbolism or animated features. We sense a shared secret between artist and sitter in Varvara Golovina’s portrait.


Back when she was in France Élisabeth painted a toothy self-portrait. This piece stirred society art critics into a frenzy. They attacked Le Brun for grotesque flamboyance. That’s because, in those days, teeth were a fiercely private matter. So, the bold Le Brun emerged as a renegade. Lucky for her, the art world loves a rebel. Élisabeth’s toothy self-portrait reveals lots more about her as well. For instance, it shows her fondness for glee. After all, Le Brun pushed it to society’s absolute limit with her choppers on display. Also, Savvy Élisabeth knew better than to take this chance with a client. She put her own smile at risk.

Adversity Leads Her to Artistry

The endearing Portrait of Countess Golovina showcases Le Brun’s talents. They weren’t only with paint and canvas. She also had profound emotional intelligence. After losing her BFF Marie Antoinette to the French Revolution, Élisabeth left France. But she remained a popular portraitist. Her skills and warm demeanor earned Le Brun fantastic friends and even better jobs all over Europe.

There’s palpable rapport coming through this work. Russian aristocrat. Varvara Golovina greets us – warm and welcoming. She refreshing in her directness. It’s a comfortable pose and yet powerful too. The familiar intimacy shared between close friends comes through. So, thanks to Le Brun’s artistry we get a friendly vibe from Countess Varvara Golovina.

The painter, Élisabeth Le Brun was pretty captivating herself. Aristocrats, writers and actors loved her. Not despite her unconventional past. But because of it. She’d always been a bit of an outsider. Élisabeth lived in a convent for much of her childhood. Then her father died when she was twelve. Le Brun despised the rich man her mother married. So, Élisabeth grew up on society’s periphery.

After her father’s death, her unusual perspective gave Le Brun an intriguing air. She was fascinating, confident, and poised. That’s how she earned herself an esteemed position in high society. People adore pluck and the ability to overcome hardship. But even more than that, they love to see themselves in a great painting. Élisabeth Louise Vigée Le Brun delivered on that with portraits galore. She also honored her Papa with each one starting right after he died. As a teenager, Le Brun was already working at her father’s profession – portraitist.

That Dickensian childhood served Le Brun. She overcame adversity. Then used it to her advantage. Thanks to such experiences she handled challenges and controversy about her work with ease. Le Brun also moved through complex political situations like a pro. Her outsider early years set a sturdy foundation for an illustrious career.

Where can I see the Portrait of Countess Golovina in person?

This portrait started out in Moscow and now lives at Birmingham University in the United Kingdom. Their Barber Institute of Fine Arts includes this masterpiece in their incredible collection. In fact, I watched an intriguing live talk on their site that included the Portrait of Countess Golovina. Entitled Emotion and Erasure, this was a fascinating blend of art education with the history of queer erasure. Click through the link to learn more about this.

How do we know about the relationship between the artist and painter behind Portrait of Countess Golovina?

Much of the historical record on Élisabeth Louise Vigée Le Brun comes direct from her personal memoirs. Published in 1835, they’re now available online. But here’s a quote from Le Brun’s memoirs about the Countess as reference.

Countess Golovin was a charming woman, whose wit and talents were enough to keep us amused, for she received few visitors. She drew very well and composed delightful love songs that she sang while accompanying herself on the piano. Moreover she was on the lookout for all the latest European literature with which she was familiar as soon as it was known in Paris.

What was Countess Golovina most known for?

The Russian Countess Varvara Nikolayevna Golovina née Princess Golitsyna was an artist and memoirist. So, she had a lot on common with her friend, Élisabeth Le Brun. Varvara served as Maid of Honor in Catherine the Great’s court. But Countess Golovina was most notable as a close confidant of the Russian Empress Elizabeth. She had intimate access in the royal court. That’s because her Uncle, Ivan Shuvalov, wasn’t only the Minister of Education. He was also the Empress’s lover.