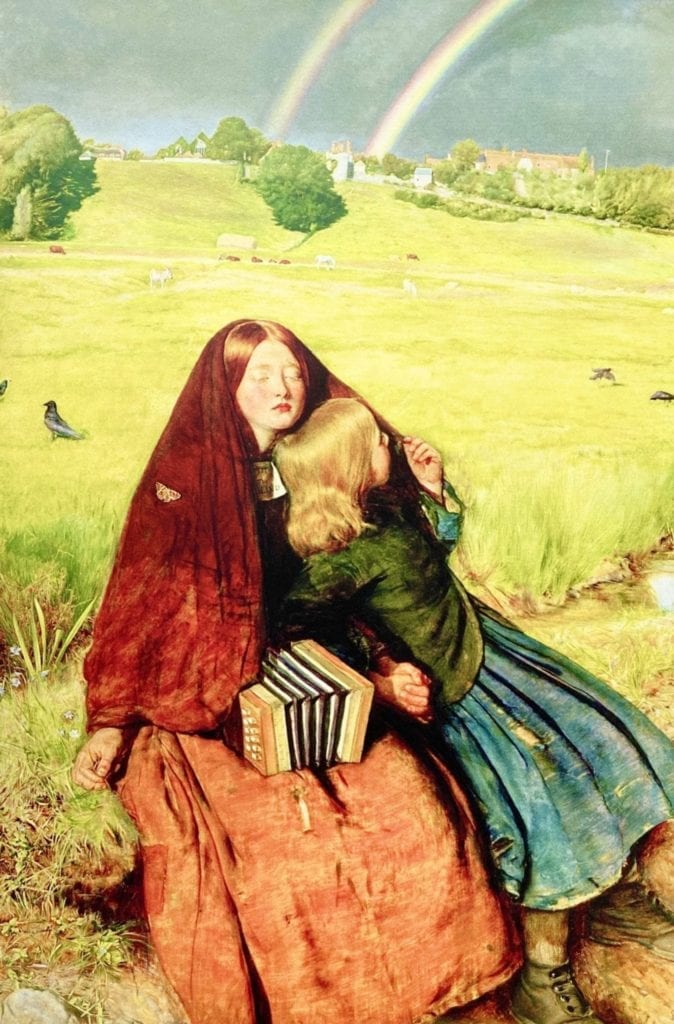 Every time I look at The Blind Girl I forget the two girls are beggars. That may be due to the blind girl’s blissful expression. Also, John Everett Millais sets them in a picturesque field of lush, joyful color. Still, this lovely duo holds us gripped in their happy moment.

The Blind Girl glows with golden serenity. Her companion gasps at the rainbow behind them. They each capture a sublime sensory experience. The younger girl keeps it simple with sight. Her tiny hand also clasps the elder girl’s. So, she’s got a connection with nature and humanity all at once.

It’s a simple painting. two girls basking in a field. But there’s a deeper story told with Millais’s The Blind Girl. The figures bring vivid life to an already glorious landscape. That’s because they’re sharing intense sensory experiences. It’s about taking the time to soak in nature’s glory. Our hero closes her eyes, lifting her face to the sun’s warm rays.

John Everett Millais shows us this with clues in the painting. These girls clasp hands. The younger one shares a thrill from seeing the rainbow into the blind girl’s fingers with a squeeze. So, that connection between them conveys both a sense of sight and touch with an electric grip. It’s clear in the blind girl’s face that she’s feeling a reverie. Part of that’s thanks to the rainbow her companion shares in a handclasp. But nature brings her even more.

Sensory impressions fill this painting. The smell of fresh grass. Tiny birds chirping. Mist hangs in the air after a brief rain shower. These are universal sensations we’ve all had. Those of us who luxuriate in these feelings are most fortunate. The blind girl is one such lucky duck.

What the Blind Girl Sees

British painter John Everett Millais did this in the mid 1800s. But he was ahead of his time. A recent study from Harvard found evidence that backs up the premise of this painting. It showed that brains of the blind can compensate for lack of sight by boosting other senses. Our brains seek experience. It’s how we learn about the world. So, The Blind Girl has that serene expression because she’s taking in the world in her own augmented way.

We see her love of music thanks to the concertina in her lap. It’s likely this also represents her livelihood. Viewers know this from the bit of paper pinned to the blind girl’s orange skirt. This would be how she let strangers know about her blindness. That way they might tip her for her concertina songs. Millais parallels her musicality with birds. They sing and twitter for the pure joy of the act. This serves to remind the blind girl of her own happiness. It’s written all over her face. She has many gifts and, in this moment, revels in them.

A butterfly graces her crimson shawl. These natural beauties represent transformation. It’s The Blind Girl who’s changed in the story of this painting. Everything, even the rainbow, moves her into a state of peaceful repose. She’s rapt in sensual delight. There’s a strange brilliance to the portrait. A light seems to shine behind us, the viewers, onto her face. While clouds still loom behind the rainbow. The storm has passed. It’s time for serenity. We know this girl’s not free like the birds and butterfly.

This painting reflects a famous quote often attributed to C.S. Lewis. Turns out it was actually Scottish minister, George MacDonald, who wrote this. Lewis revered MacDonald. So, he likely did repeat the quote. But the Scot published it in 1892 as part of a piece he did about excessive mourning at funerals.

Never tell a child you have a soul.

Teach him, you are a soul;

you have a body.

The Blind Girl seems to exemplify this idea of spirit. Millais captures a moment where she exists as a soul in this painting. Her body matters less than the spirit she exudes. That’s why many art historians talk about this work in religious terms. Her face yields that much power and makes this a true masterpiece.

Where can I see The Blind Girl painting in person?

This masterpiece graces the Birmingham Museum and Art Gallery collection in England. It’s a wonder to visit. The Edwardian Tearooms offer champagne and lattes with a hearty dash of history. You’ve never celebrated tea time quite like this before. If you can’t make it to the U.K. their virtual tour offers glorious panoramas and classic paintings with just a click.

What kind of painting is The Blind Girl by John Everett Millais?

This colorful masterpiece fits into many fine art categories. Millais was one of the Pre-Raphaelite Brotherhood founders. So, this piece works as a Pre-Raphaelite example. It’s also a perfect case of Romanticism. So many feelings flow through this painting. There’s also an element of realism to this work. The most profound category parallel, though, sits between landscape and figure. The two girls tell a figurative story. But there would be no narrative without the painting’s glorious landscape. That’s where we get the plot.

Where does the painting The Blind Girl take place? Who modeled as the two girls?

John Everett Millais found inspiration for this painting when he visited Winchelsea in Sussex in 1854. That nailed down the setting for this masterpiece. Still, it would be another two years before Millais finished the work. He painted the Winchelsea landscape. Then John Everett moved to Perth, Scotland and added the two figures at front. He painted Mathilda Proudfoot as model for The Blind Girl and Isabella Nicol as her companion.

What is the painter John Everett Millais most known for?

This is an apt question because Millais was quite famous in his lifetime. He still is – thanks to some of his iconic works. The Blind Girl exemplifies only one of several master works by John Everett Millais. In fact, only a couple years before painting this he created Ophelia. That painting resonates through the ages. It remains the iconic fine art representation of the character Ophelia from Shakespeare’s Hamlet.

ENJOYED THIS The Blind Girl ANALYSIS?

Check out these other essays on Landscapes.