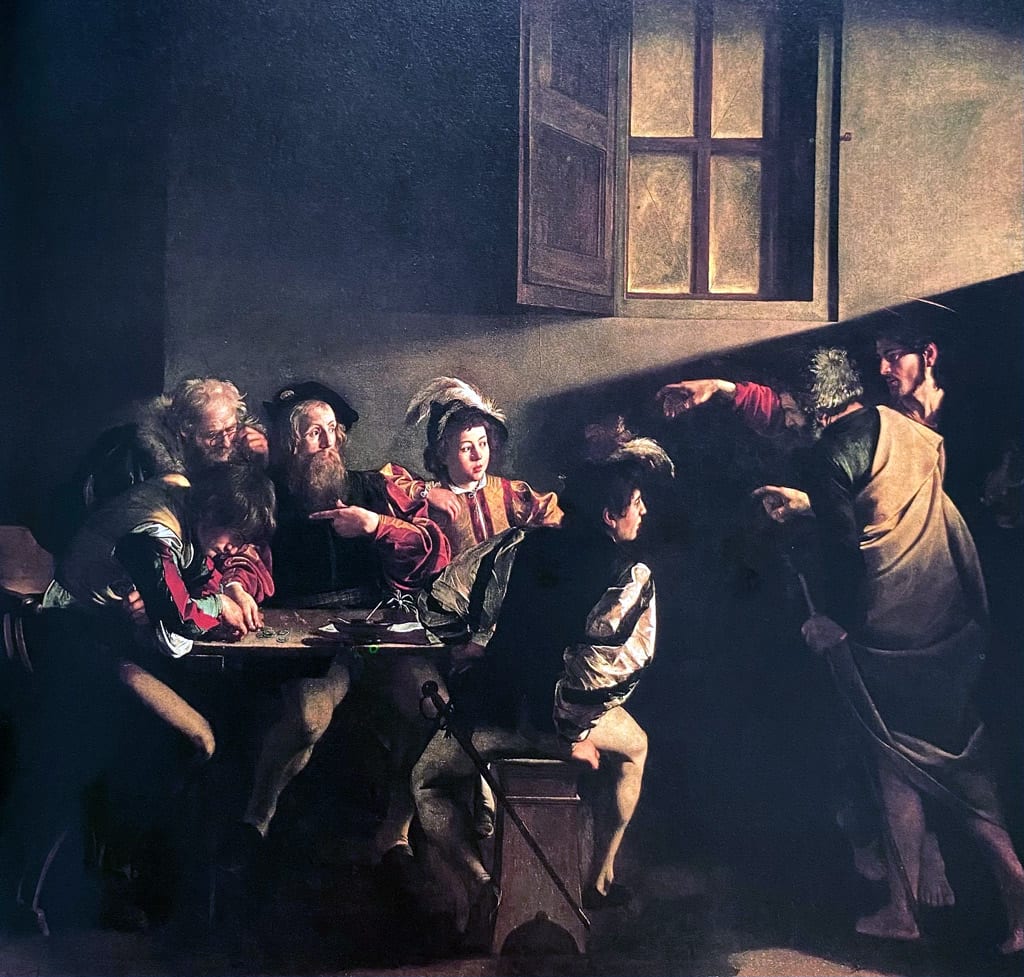 In this analysis for the painting Calling of St. Matthew by Caravaggio I include:

Caravaggio’s deft handling of light grounds Calling of St. Matthew with a sense of reality. That’s why we’re able to look at this scene from a gospel story through secular eyes. The painter presents an extraordinary event through an everyday lens. This familiar but implausible story thus seems real. Caravaggio brings an angelic visitation down to earth. He painted St. Peter summoning St. Matthew to follow Jesus Christ in a casual setting.

We get the same biblical information about the story. But placing the situation in our familiar world helps us relate to it. Caravaggio includes a thick, solid table. He grants the forefront boy raw, muscular legs and even spotlights one. This gives the painting earthiness. It’s a real world scene. Yet, we also know from the title, Calling of St. Matthew, that it’s a gospel story. The only other hint of religiosity floods through the window at right. It’s the light of Matthew’s Lord Jesus. But we don’t see the source here – only that streaming, soulful, light.

The eminent Italian painter, Caravaggio, uses perspective as a tool in this piece. Many modern photographers and filmmakers employ this same trick today. Teach the viewer about someone through the reaction others have to them. The Beatles are often introduced today with this method. It’s a shortcut that shows their worldwide popularity. Videos of screaming fans losing their minds cut right to the point. Caravaggio had the opposite idea in mind for Calling of St. Matthew. Here we see that Jesus Christ in his lifetime didn’t get a reaction from most people. Sure he had believers and even followers. But like St. Matthew, they were rare. This painting also shows the conventional life Matthew led up until his calling.

Caravaggio puts St. Peter in the forefront so we don’t even see Jesus. His placement between God and us shows that Peter represents the Church. He works as messenger and mediator. This blockage also points out that those who saw him in life didn’t see what Jesus would become. His followers, left behind after his death, revealed this Jesus. The Jesus in scripture represents their belief in him. This biblical Jesus wasn’t the man most people on earth saw when they looked at him. Caravaggio was an earthy painter. His point of view in Calling of St. Matthew reveals this. He delights at dropping a gospel story into an everyday situation. It shed new light on an old story.

Reacting to God with “Meh”

In many ways Calling of St. Matthew by Caravaggio works like a character study. Viewers find many personalities and peculiarities in this table of men. My eyes go first to the meaty legs of the seated boy in the painting foreground. He’s planted solid on a stool but leans toward the light with interest. This character represents pure observation. His face reads blank, like an animal. He knows not what he sees. It’s a pure reaction and the least human in the room. So, it makes sense he’s got his back to us. Beside him to the left we see a classic adolescent response.


Caravaggio gives this uninterested rapscallion something else to do. He’s enraptured by coins on the table. Of course, nobody’s blaming him. Coins are cool. In fact, they matter quite a bit at this particular table. The elderly man next to this coin-engrossed lad works as a calculator. He’s at the end of the table and the most turned away from the beckoning light.

That’s because the old man focuses his attention on counting. He’s not even aware there’s a visitor. From his grizzled forbearance, it seems he wouldn’t care even if he did notice. There’s no hope for this man. He’s stooped over in a permanent posture of calculating coins and missing a life-changing event that’s right before him. It’s a bit different from the boy holding his head down to gaze upon his loot. There’s a chance this boy could look up. He’s at least facing the direction of the light. Many writers claim this creates ambiguity. That perhaps this boy is actually St. Matthew about to raise his head. Of course, that’s possible.

This elderly man and boy symbolize two sides of the same coin. Both are interested in tangible rewards like money. They’re so caught up in the visual stimulus of riches that both miss out on the spiritual wealth at the other end of the table. The old man has held this attitude for so long, he’s turned completely away from the possibility of intangible rewards. But the younger one need only look up a bit and he could see the light. Given that this is a Caravaggio, it’s literal light.

The other two gentlemen play key roles in Calling of St. Matthew. Beside the calculating crony sits St. Matthew himself. He’s the tax collector. Yet Matthew’s only interested in Jesus and St. Peter. The future apostle points to his chest as if to ask if they’re calling him. Little ol’ me? He’s curious and modest. In fact, he’s the only humble man at the table. As mentioned before, some art critics and historians believe this man isn’t pointing to himself. They claim he gestures that finger to the slouched boy with his head down. This could be the case. But makes this bearded man even more humble. In that case, he’s the perfect one to take on the saint role. After all, the other characters are indifferent or obtuse.


But what of that last gentleman on St. Matthew’s side of the table? He’s neither blasé or dumbfounded. This cad acts all knowing. Caravaggio was known for such characters. Many art historians say this was the painter’s way of inserting himself into his paintings. Best part is, this rakish lad sits dead center in the canvas. It would be just like a rascal to stick a know-it-all self portrait in the middle of a gospel story. A signature Caravaggio move and the mark of a true masterpiece to pull it off so well.

Why did Caravaggio paint Calling of St. Matthew?

This wondrous work of art is part of a St. Matthew trio in the Roman chapel, San Luigi dei Francesi. The French Cardinal Matthieu Cointerel led a thrilling and prosperous life. He died in Rome, 1585 – quite rich and powerful. The Cardinal’s will left a fortune behind with instructions for a chapel decorated in St. Matthew themes. This Saint was his namesake. So, it was a humble way to honor his own memory.

Caravaggio’s employer, Giuseppe Cesari, had painted frescos on this chapel’s ceiling. He was also slated to do the Calling of St. Matthew project. But Cesari was too busy being famous and fancy to pull it off. So, Caravaggio got his first major church commission. It was his first piece with more than a few figures as well. Caravaggio also painted the other two pieces: The Martyrdom of Saint Matthew and Inspiration of Saint Matthew. These three glorious paintings were all completed within only a few years. Caravaggio finished the Calling in 1599 and all three were complete by 1602.

What style of painting is Calling of St. Matthew by Caravaggio?

Caravaggio’s trio of St. Matthew paintings represent a style shift in art history. Before this religious art was all about Mannerism. In fact, Cesari, Caravaggio’s boss, represents the last breath of the mannerist style. It was an idealistic and illusionist take on portraiture. But Caravaggio was much more down to earth in his painting.

Calling of St. Matthew draws its power from this newfound style. That’s because it represents the coming together of two worlds in theme as well. The realistic way Caravaggio portrays each character reminds viewers that St. Matthew was a real man with a career. Matthew also had peers and friends that he left behind. It makes the calling all the more an extraordinary event. This could have happened to any of us. If Caravaggio had used the florid and fantastic Mannerist style, the scene would seem otherworldly. Instead he painted it in our world. That leads us, inevitably into the next question.

Why is Calling of St. Matthew an important painting?

Calling of St. Matthew gives us a perfect example for the “right time and place” phenomenon. Caravaggio had his own vision for painting. He took a risk; painting a gospel story in a secular manner. That brazen move made a big difference in the art world. Also, his realistic style and mastery of light and dark suited the painting. It’s about coming out of darkness into light. When we look back at the painting, Caravaggio’s use of light serves as a revelatory gift.

In a way, Calling of St. Matthew works as proof of progress as well. It proves that even as the Renaissance wound down, new ideas bloomed. But more importantly, it showed that profound religious ideas could shine through a realistic portrayal. Caravaggio was already well known in 1599, thanks to secular works like The Cardsharps. This masterpiece made it clear that his style of painting worked no matter what theme he portrayed. Even Jesus Christ himself was in good hands with Caravaggio.

Which one is St. Matthew?

Analysis and reflection on Calling of St. Matthew

The Web Museum of Paris take on Calling of St. Matthew