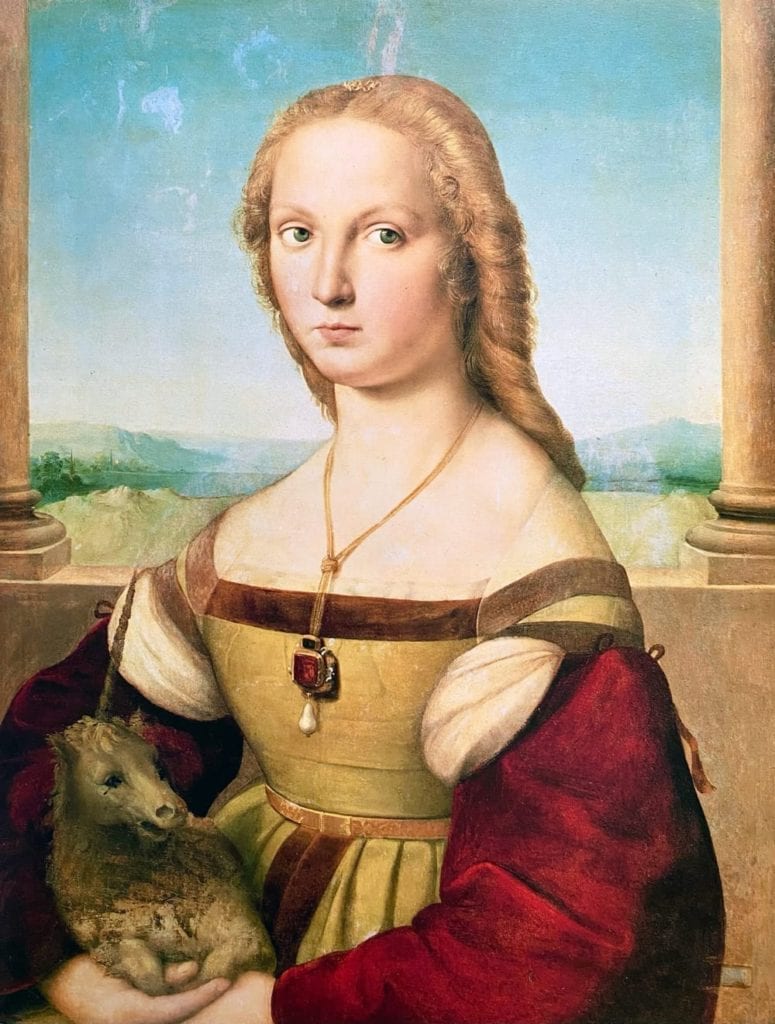 In this piece on Lady With a Unicorn by Raphael you’ll find answers to:

The young Raphael, a notorious ladies man, painted this fresh sprite of a portrait. They were likely close in age. But viewers also sense that there was nothing between painter and subject in Lady With a Unicorn. She’s a remote beauty. Her loveliness resonates more chilly than sensual. The battered looking unicorn she cradles brings a tenderness to her, though. This isn’t a typical unicorn. Most sparkle with bright and magical elegance. The Lady’s unicorn appears fragile as a brown baby bird. This gives her the essence of motherhood. The tiny mythical creature leans into a velvety soft crook of her arm.

Turns out this wasn’t Raphael’s original take on Lady With a Unicorn. One of the painting’s owners later paid an artist to cover the unicorn. They wanted a portrait of St. Catherine. So, no mythical creatures allowed. This over paint was later removed to again reveal our delicate unicorn. That’s why the tiny animal seems a bit smudged beside the clear luminosity of our Lady. It brings even more meaning to this masterpiece. Unicorns represent innocence and virginity. The painting’s tribulations through time run parallel to this Lady. A woman of this time, the late 1400s, struggled to maintain an immaculate reputation.


Virginity and the unicorn represent this ideal. It’s not much of a challenge to keep up this clean cut appearance at the young age of the Lady here. But as time passes, innocence and virginity lose their luster. Much like our battered baby unicorn, chastity can wear on a woman. After all, what’s the fun in purity as decades pass into a vortex of loneliness and longing? When we gaze into the eyes of our Lady With a Unicorn, she doesn’t give us much. Her eyes register no emotion. This creates longing in us to know more about her and what she feels. We know barriers like this and her virginity will create isolation for the Lady. But we can never know her true feelings. She grows old out in the cold. For she will likely never know true love.

This Lady With a Unicorn represents innocence. She’s beautiful and positioned above it all. The unicorn makes all the difference, though. Unicorn symbolism might seem naive or child-like today. But starting in the Middle Ages and through the Renaissance, unicorns held more power than mere imagination. The Italian painter, Raphael’s, mythical creatures seemed real. That’s because people were unfamiliar with the mysterious narwhal of the sea. They only knew of their tusks.

These glorious horns washed up on beaches in Greenland and Scandinavia. Their mysterious rarity, especially in Europe, gave these horns inherent prestige. Princes and Popes cherished narwhal tusks as unicorn horns. Unicorns meant the ultimate in purity. Only a virgin could tame a unicorn. That’s why they represent chastity and innocence. Many in the Middle Ages even believed the horns could purify water. So, paranoid rulers afraid of poison would dip narwhal tusks into drinks before tasting.

This pristine reputation explains why modern unicorns are white fantastical creatures. Sometimes they even sparkle. It gives our Lady With a Unicorn a rare sensitivity. Her unicorn looks muddy and meek. The over paint cast a vulnerable shadow on this purity symbol. Unicorns are always rare. But this represents the rarest among them.

So, this Lady’s extra special. She’s been through the gauntlet of aging while remaining pure and youthful. Thus, this portrays two mythical creatures. The woman who stays forever young and virtuous can’t exist anymore than a unicorn can. They become one entity in this masterpiece. It’s a prime example of how changes to artwork can add resonance and meaning. The smudgy unicorn brings a sense of reality to this otherwise impossible creature.


It’s the painting’s ironic element. The unicorn makes this woman seem more real – even in her impossible perfection. To our modern eyes, the smudgy mythical creature looks like a much-loved stuffy. All its magical, virginal powers sapped. But our Lady stays fresh and bright. She appears untouched by the passage of time or decay. Perched high on her pillared precipice above the land, she’s pristine.

The Lady’s ivory tower perfection contrasts with the wilted unicorn. It’s the masterpiece of this painting. Unicorns are the immortal ones, they usually stay forever sparkly and bright. In the real world it’s ladies that deteriorate and lose their sheen. Thank goodness for the wondrous magic in Lady With a Unicorn. It’s where virginity keeps you young and unicorns do the aging for you.

Lady With a Unicorn – FAQs

Are there other titles for the painting Lady With a Unicorn?

Yes. For instance, Lady With a Unicorn exhibits as Portrait of Young Woman With a Unicorn in the Borghese Gallery now. In this showing the museum focuses on the different iterations of the painting as St. Catherine as well as the original and current chaste Lady. They point out the significance of her ring-free hands. It was unusual in the Renaissance to do a woman’s portrait on any other occasion than her marriage. This cites yet another example of how this Lady is like a unicorn herself. She’s exceptional in so many ways.

Lady With a Unicorn also has been known as Young Woman with a Unicorn. But for about two hundred years this painting was said to portray St. Catherine of Alexandria. A repainting gave the Lady a wheel and palm frond to cover her unicorn. It wasn’t until this over painting’s removal between 1934-36 that the Lady reunited with her mythical friend. This was also when its title returned to the topic of unicorn and Lady.

Who is the woman portrayed in the Lady With a Unicorn painting?

This represents a hearty debate among Art History scholars. Books and articles abound on the topic. Sublime Beauty: Raphael’s Portrait of a Lady with a Unicorn explores several theories on the identity of the painting’s subject. In an essay, Renaissance scholar Mary Shay-Millea argues that the portrait’s model must be Maddalena Strozzi. She sees a strong resemblance in a contemporary Strozzi portrait. Another theory claims Raphael’s sitter was Julia Farnese. Julia was Pope Alexander VI Rodrigo Borgia’s mistress. Art Historians point out that the family symbol of the Farnese family was the unicorn. But we’ll likely never know with absolute certainty who this woman was. She’s an eternal mystery. This adds poignance to the portrait. The Lady remains a perfect, porcelain, enigma.

What is the secret of the painting Lady With a Unicorn by Raphael?

There are many secrets behind Raphael’s painting Lady With a Unicorn. That’s part of its charm. Many knowing viewers see a glint in her eye thanks to these wonders. The most well known secret sits in the Louvre as a sketch. It’s the painter, Raphael’s, first take on the Lady. The sketch indicates a clear homage to the Mona Lisa. See below for yourself. The book Sublime Beauty: Raphael’s Portrait of a Lady with a Unicorn also discusses this at some length.

Of course the two hundred years of over painting constitutes a secret. But there’s even more over painting in Lady With a Unicorn than just St. Catherine masking. Turns out, Raphael originally painted a small dog in our Lady’s arm. Dogs have always symbolized fidelity. They were often used in portraits of ladies upon marriage. The canines represented their imminent loyalty. Still, it could be that Raphael used a dog as a unicorn model and then added the horn.

The last secret detail was yet another addition. When the Lady With a Unicorn represented St. Catherine the over painter (whose identity also remains a secret) draped a shawl across her shoulders. This cloak made her even more chaste, covering her alabaster clavicles. It’s an intriguing addition to the irony of the piece. Removing it brought the Lady back to her true, virginal self. Turns out she doesn’t need coverage to prove her innocence. Our Lady’s unicorn serves that purpose – at long last.

ENJOYED THIS Lady with a Unicorn ANALYSIS?