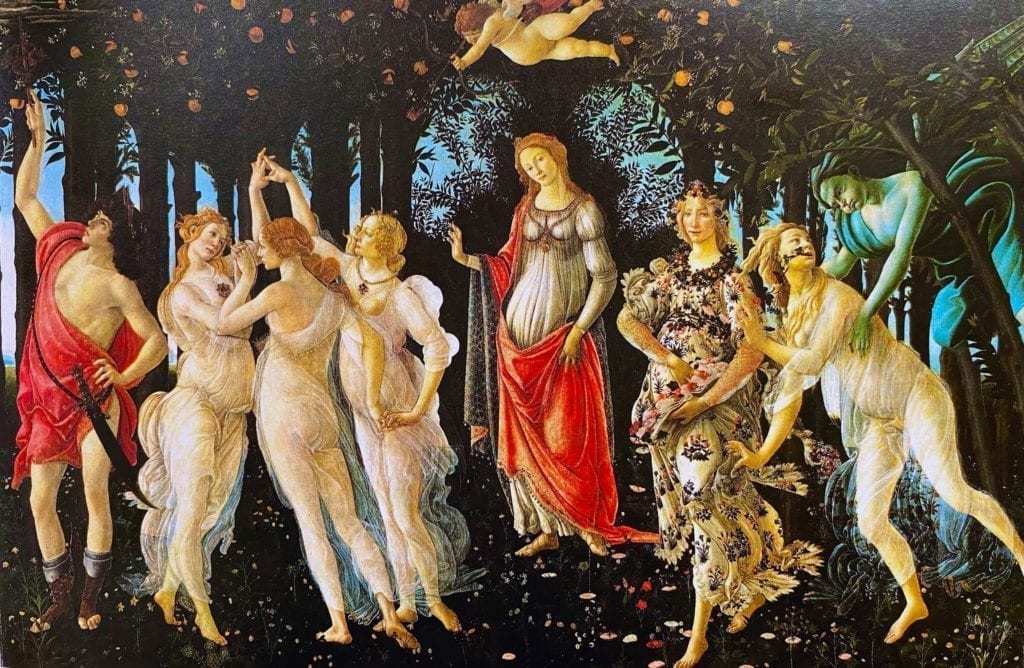 In this evaluation of the painting Primavera by Botticelli I cover the following concepts:

Botticelli’s ​Primavera (Spring) exalts. It’s one of the most popular and well known paintings of all time. But this masterpiece deserves all that attention. Some times notoriety sprouts from vapid glitterati. This is time, though, it’s packed with meaning. No matter that this masterpiece graces tote bags and tees. Its popularity springs from genius – not marketing. There’s true mastery in this piece. The deep meaning’s only one of many reasons why. Nobody paints like Botticelli. He employs distinctive style. But Botticelli’s best at characterization. It’s easy to pinpoint his subjects.

Primavera‘s a perfect example. It’s crammed with characters. We know them thanks to fine details and telling dynamics. His subjects leap from the pages of myth. Botticelli transforms imagination into reality with a paintbrush. On the viewer’s far right the god Zephyr blows a baby into the nymph Chloris. Her expressive face conveys this as a Me Too moment. Chloris isn’t feeling Zephyr’s love. That may be due to his lack of communication. He expresses only physical love… and even then with mere wind. The icy blue of Zephyr’s figure reveals his cold character. Chloris reacts to his attack turning away. She bursts with outraged flowers. They fly from her lips like a shriek of butterflies.

But this is only the story’s beginning. Zephyr’s physical act transforms Chloris. She’s now the pregnant goddess of flowers – Flora. So, the physical attack on Chloris bloomed into a new life. This changed the stricken nymph into a flowering goddess. Vulnerable Chloris in only sheer gauze shifts into pregnant Flora. Now she’s at peace and modest in a glorious flowery dress. Her arms encircle the burgeoning of her belly. While Chloris holds her arms out in desperate, pleading fear.

Details like these engross viewers in Botticelli’s dramatic story. The drama in Primavera springs from love. Specifically, three types. Venus and her son Cupid in the painting center drive this home from first glance. This goddess represents a mother’s love. In fact, she has a Madonna’s presence. Her manner seems thoughtful, patient, and serene. Venus grounds the scene as a solid and loving centerpiece.

Love is Blind and Lacks Perspective

Above Venus, her child Cupid floats poised with love’s arrow ready. His mother represents familial love. This links central Venus with the right side of the painting. After all, that’s where the goddess Flora becomes a mother. Many Art History scholars believe Botticelli painted Primavera for a bridal chamber. So, it makes sense to tell familial stories. The story of Chloris transforming into Flora through pregnancy works for this. It works as a marriage analogy. Even the worst marital matches may result in the joy of creating a new life. Sure, her marriage may not be the best. But babies can bring life-affirming wonder and meaning. She made it through Zypher’s painful attack to blossom with motherhood on the other side. Notice the bounty of flower petals around Flora’s feet and her peaceful face. She’s happy about this baby.


Botticelli has thus covered pure physical and familial love. He carries these themes from the right side of Primavera into the middle. Venus and Cupid, the immortal mother and son hold court at center. But they also engage the left side and draw viewer eyes across the canvas. Venus holds her arm in a parallel pose to Cupid. It’s a love blessing that flows from the palm and fingertips. Cupid holds his arrow between those very fingers, ready to shoot at dancing ladies below. This trio of near nudes float like fairies under the orange trees. Their arms entwine with fluid grace. They represent the innocent phase right before love hits. Cupid’s arrow will spring into action any moment. We’re held in suspense with Botticelli’s dramatic tension. He pumps it up with a blindfold on Cupid. After all, love is blind and even a bit random at times. That’s true in romantic love most of all.

Primavera‘s left side glows with romance. The god of communication, Mercury, poses on the far left. Although the messenger god, he represents distances and turns away from the scene. So, he plays a many-sided symbolic role here. In one way, he represents a deeper love where partners share and talk. It’s quite an improvement over what Zypher offers. But Mercury brings more than that to the picture. The maiden in the middle looks at him. She’s the most naked and youthful of the trio, with no necklace and less belly than her peers. This one’s also distracted by Mercury. In this way he represents infinite potential. He could carry her away into that world outside the orange grove. Love does transport us sometimes – especially the first time.

Botticelli tells complex love stories with his painting Primavera. He invites us into a secret mythical garden full of gods, goddesses, and dramatic action. It’s like a full blown Shakespeare play captured on canvas. In fact, that was my first thought when I saw this painting in person at the Uffizi Gallery in Florence. It overwhelms the senses with lifesize figures and universal themes.

But more than anything else, it’s breathtaking in pure, delightful beauty. Botticelli places these figures flat on the surface of this garden. He avoids using perspective. That’s why they don’t seem to belong in their world. They look a bit like cut-out paper dolls. With this design choice Botticelli reminds us of the most important aspect of love. In it, we lose all perspective. It takes us out of our ordinary world. This is only one reason Primavera’s a poignant and powerful masterpiece.

Primavera created significant controversy through the Art History ages. Scholars even debate why Botticelli painted it. Though general consensus points to it as a Medici commission. Lorenzo di Pierfrancesco de’ Medici likely had Botticelli paint it. This would have been a perfect wedding gift for his new wife in 1480.

Also, this wonder of the early Renaissance marked a secular departure for Botticelli. He’d been painting frescos in the Sistine Chapel right before this masterpiece. Primavera sparked interest in mythical characters. This was at a time when the main societal focus was biblical. So, it started a bit of cultural revolution. Thanks to Botticelli’s lovely gods and goddesses, allegories and myths became cool.

Another reason this painting matters is size. It’s enormous. This large canvas was unprecedented at the time in western art. One would have to harken back to classical antiquity to find a comparable example. That made for exciting possibilities in the Renaissance. Seeing a painting became a bigger experience. Primavera has such a formidable presence that it feels like entering Botticelli’s kingdom. Such a land of wonder and beauty transports like no other.

As a nature lover, my favorite Primavera fun fact lies in its forest. Botticelli was a meticulous and thorough researcher. He venerated plant life and included about 500 plant species in this painting. In fact, more than 200 of them are flowers. The woods are mythical. But Botticelli brought them down to earth with real fruit and plant forms.

Where can I see Sandro Botticelli’s painting Primavera in person?

If you can only visit one city in the world to see art, it must be Florence, Italy. One of the most life-changing museum experiences on the planet awaits at the Uffizi Gallery in Florence. Built in the mid 1500’s by Giorgio Vasari, it’s home to many of the finest masterpieces. This extraordinary, rare, and special collection will move even the most jaded art lover. From Michelangelo to Da Vinci; Caravaggio to Rafaello, this wondrous museum holds fascinations galore. Primavera was my absolute favorite part of this museum. I was stunned by how bright they keep the room. It’s a sunny delightful surprise to enter this birthing room for the Renaissance.