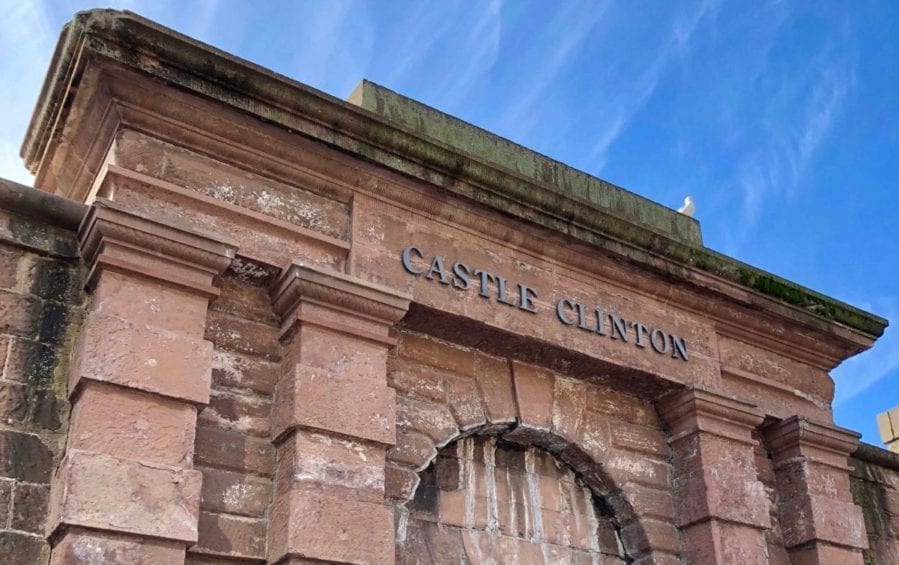 Castle Clinton and Seaglass Carousel are tourist magnets in Battery Park. Downtown Manhattan packs streets with historic landmarks and lessons. But these two iconic spots are most popular. For good reason. They have the best stories. Battery Park meets Broadway at its bottom. This area, near the Staten Island Ferry, holds enough history to fill a library of books.

In fact, Castle Clinton’s one of NYC’s key historical landmarks. It’s still relevant today as an active building with long lines outside daily. That’s because it’s where you pick up tickets for the Statue of Liberty ferry.  But this circular beauty has served many functions over the years. Just never as an actual castle. SeaGlass Carousel brings its own circle magic to the space. It spins and whirls the history of this place into a rad experience today.

First, this building served as an immigrant portal in the 1800s. Today, lovely trees haunt it. Runners like me race past. Hawks swoop over its stones, squirrels scurry by. People from all over the world flock and rush into long lines out front. It’s the busiest bustle in Battery Park. Hard to fathom, but if Robert Moses had won, this glorious park would serve as a highway entrance.

Castle Clinton – Not a Castle

This Castle’s actually nothing like a castle. It’s a one story, brick, round building. The city of New York built it as a protective fort to fend off British invasion in 1811. But nothing in NYC stays static. New York changes every day. Even our landmark structures shift. That’s because this city is all about progress and transformation. It happens with our people, buildings, and spaces alike.

For its next phase, from 1823 until 1855, Castle Clinton was an entertainment center. To improve acoustics for shows, they built a dome over the open frame. Then it was an aquarium. Underwater wonders didn’t last long in this alleged castle. But they live on today across the park at the glorious SeaGlass Carousel. Check out the video below to see a bit more about this.

Then from 1855 to 1890, Castle Clinton became our first immigration center. In fact, only a few hundred feet away, you’ll find The Immigrants sculpture – a dedication to immigrants. This was pre-Ellis Island. Though it’s not as well-known, more than 8 million came through Castle Clinton. It worked as a welcome portal to hopeful emigres looking for a new home. That’s why its current purpose works perfectly. Every morning I run past and see a line forming around it. That’s people buying tickets for the Statue of Liberty ferry. They wait in all types of weather by the hundreds long before the ticket sales office opens.

Castle Clinton played another critical role in our nation’s history as well. Robert Moses was at the peak of his powers. He ruled over New York City as a city planner. He loved nothing more than cars and highways. But he was also thus a notorious destroyer of glorious historical structures. Luckily, our castle took down this Goliath. Moses planned to tear it down. He wanted an elevated highway to run from the bottom of the city all the way through the middle and to the top. That was the thing about Moses, he worshipped cars and wanted them to rule city life. He wasn’t focused on preserving NY history or even the notion of public space.

Activists united in protest. Then they founded the Landmark Preservation movement which continues to protect historic buildings. So much greatness comes from this humble donut, alleged castle. Built to fight, it brings peaceful resolve. Castle Clinton, while not a castle, brings honor and patriotism to NYC. We’re so grateful for its lasting grace and glory.

When I run at dawn or go for night walks, I love to circle the SeaGlass Carousel. There are colorful lights galore. Music washes over the swimming magical fish bodies. It’s a swirling fun whirligig. Kids shriek with glee. Couples canoodle. I peek inside, panting from my run, and take pretty iPhone pics. As this carousel turns, it unfurls a litany of butterflies in your stomach. It’s got that special sauce vibe.

But what’s so special about this site? It’s much more than emotional tenor. That’s because the SeaGlass Carousel serves as a grand reflection of Castle Clinton. It’s both symbolic and literal. The Carousel, round and regal, feels like a castle aquarium. It parallels Castle Clinton, which served as an actual aquarium with two and a half million guests a year. That was from 1896 until 1941.

The SeaGlass Carousel plays all sorts of music, from Oasis to Miles Davis. Its mood shifts along with the fairy lights. A treat – riding these fish feels special. That’s thanks to the space – like the inside of a nautilus shell. Also, there’s no central pole. Each underwater creature has their own station. This makes a perfect solo ride. Or it’s ideal for an intimate pair. If that’s your thing. There’s a splendid ride awaiting inside, no matter what brings you here.