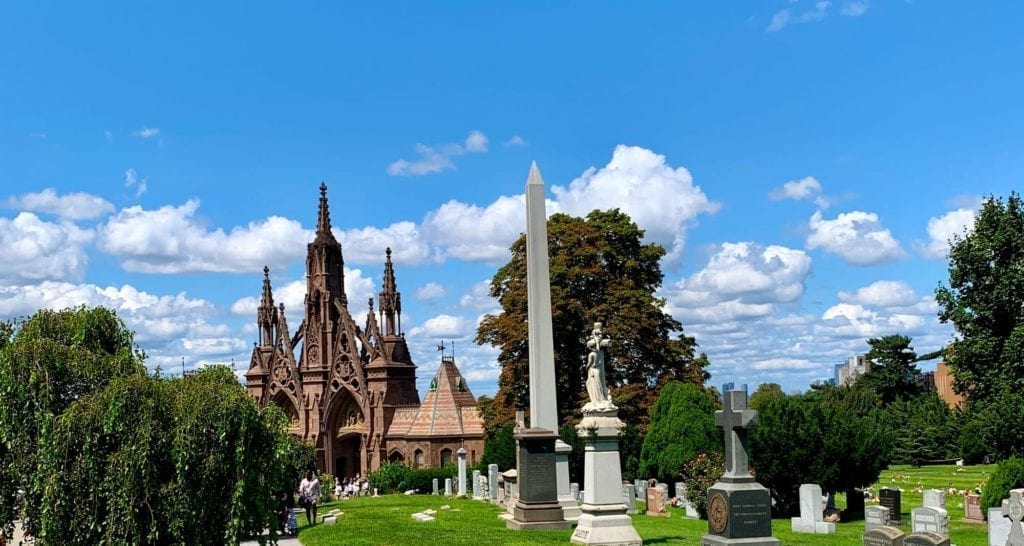 The first time I visited Green-Wood Cemetery, I fell in love. It’s a Brooklyn historical marvel of glorious beauty. Not only a place to honor death, there’s a lot to do and even more to learn. I’d never have thought visiting a cemetery would get my juices flowing. But history and learning get me going. That’s the stuff I love most. So, this place caught my fancy right away.

Prefer to listen rather than read? Click here for an audio version:

Many fascinating people lie at rest in these impeccable historic lawns. The names are often familiar. Boss Tweed’s here along with politicians people actually liked. Monuments proclaim familiar family names like Colgate, Pfizer, Tiffany, and Steinway. Notorious gangsters and other dark characters from history lie within graves here too. But the coolest stories are the iconoclasts buried here.

From Leonard Bernstein to The Wizard of Oz himself, Frank Morgan, fame abounds here. The founder of the New York Times and the first black woman, Susan Smith McKinney Steward, to earn a medical degree in New York rest here too. More stories are around every corner of Green-Wood. In fact, it takes many visits to even get a true sense of its profound history.

It’s not intuitive that visiting graves teaches history. But that’s what happens. Each stone or statue tells a story. There’s a person buried there and that person lived a remarkable life. Learning their story gives us a trip back through that particular bit of the past.

There’s an entire battle-related section of Green-Wood Cemetery. Even a street named Battle Avenue, shown above, to help visitors find the area. This makes sense because before the land was a cemetery it was a landmark Revolutionary War battlefield. In fact, this was the first major battle of the war – The Battle of Brooklyn. That’s why I went to Green-Wood Cemetery the first time. Every year there’s a festive re-enactment of this historic battle.

It happened August 27, 1776. At that time this was the highest point in Brooklyn. To this day, they call this landmark Battle Hill and it commemorates the American lives lost that day. That’s because the colonists lost big time. The soldiers who fell in that battle were buried right where it happened. So, it’s almost like they originated the cemetery.

A statue of Minerva commemorates these patriots. She’s the goddess of wisdom and war. This goddess raises one hand to salute our Statue of Liberty. She’s off to the West across New York Harbor. But you might need your glasses to make this connection. That’s not as close as it sounds. Minerva’s other hand lies upon a wreath at the Altar to Liberty. The cemetery and city dedicated this monument August 27, 1920, 144 years to the day of the battle.

But it doesn’t end there. The commemorations continue to this day. Turns out re-enactors take their hobby to heart. The uniforms, guns, accoutrements, and actions felt true to life at the re-enactment. It was a surprise to me how much fun it all was. The authenticity of everything give a true sense of somehow remembering the event.

For example, the British redcoats are bright, tailored-tight, and clean. Their black boots shine with high polish. Meanwhile the patriot soldiers wear sloppy, tattered cream blouses of the period. Their jackets are slouchy and vary in color. Some don’t even have jackets. It’s a reminder from history lessons about what a ragtag team our colonial soldiers were. They were all passion and no polish.

Cannons fire. Authentic period rifles blare. Horses gallop. It’s exciting, loud, and gripping. In the end, the patriots retreat and take quite a few British bayonetts to the back. Check out the video above for that harrowing scene. It’s a wonder to watch in person. Best part’s after the battle, though. The patriots come right up to the crowd and answer questions. Many of them are historians or major obsessives on the topic. They love talking about the battle, the uniforms, and all the circumstances. It’s a joy for a curious lady like me to find out all these cool details. I’m excited to go to their next Battle of Brooklyn re-enactment.

Before attending this event, it was a different battle in my mind. Back then I thought about how discouraged George Washington was after the battle. He made keen strategic moves that saved many of his men. But he also had to sacrifice many and the British were thus occupying Manhattan at battle’s end. So, it was a loss that planted a seed within Washington. His goal to get NYC back into patriot hands never subsided until Evacuation Day. So, this battle held a place in my mind as a catalyst. It was the inciting incident of this Revolutionary War story. But after experiencing the re-enactment in person, I see it anew.

Now it’s about the intense boom of hearing that first cannon fire. I remember the retreating soldiers. Their resignation as they’re forced to leave their fallen brothers in the grass. But most of all, I imagine how much it must burn to take a British bayonet in the back. After this battle, I’ve never heard the words stabbed in the back the same way again. How profound that pain must have been. These patriots already felt betrayed by their former allies, their fathers of sorts. Now that treachery took their lives with a literal stab to the back as well.

As of this writing, the only way to visit Green-Wood Cemetery lies online. Luckily, they’re packed with virtual prowess. Every day I’m excited to see cool events and tours on Green-wood Cemetery Instagram. Then after the Covid19 pandemic lifts and we can all venture outside, check it out in person. I’ve got my fingers crossed for the Battle of Brooklyn re-enactment this summer. But I’ll be visiting for trolley tours and other funfests too. Hope to see you there.