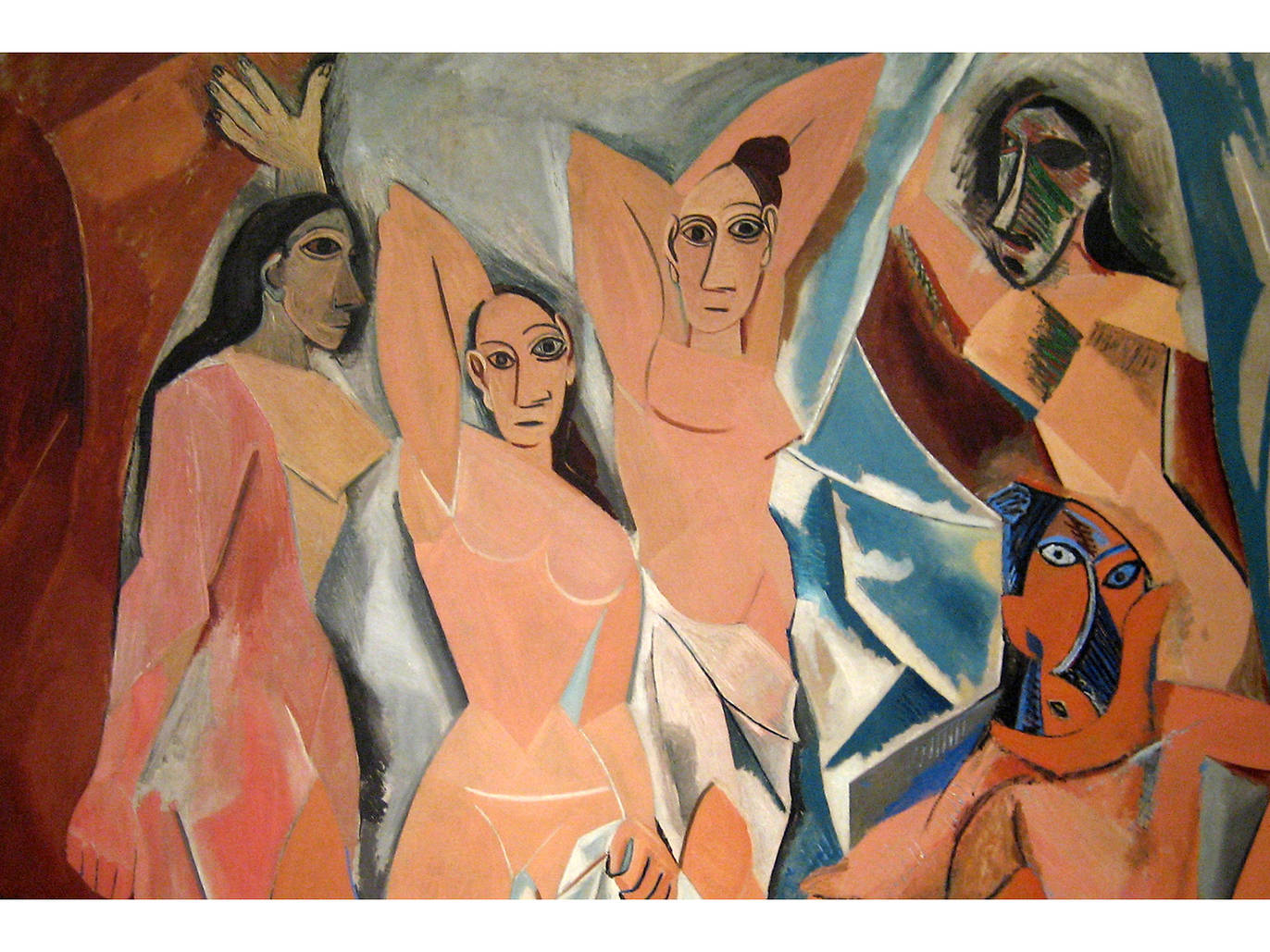 What makes Picasso’s painting Les Demoiselles d’Avignon one of the most influential Western paintings of all time?

Most art history texts about Les Demoiselles d’Avignon focus on its sexual aspects. Avignon wasn’t only Picasso’s hometown. It was also Barcelona’s red light district. That’s a neighborhood where sex workers are known to conduct business. In fact, Picasso’s original version of this scene included a sailor seated among the nude women. But then he removed the sailor figure to change the focus. Instead, Picasso ramped up the aggressive sex vibe in the female figures. He also borrowed from African art concepts. These two elements together didn’t age well.

The figures pose in powerful, enticing stances. They wear either idealized features or African masks. But their faces aren’t the only African element. Picasso shifted the structure of their anatomy into geometrical triangles and ovals. This re-ordered the human figure. He thus disrupted traditional Western conventions for figurative portrayals. Picasso broke with conventions here. That’s the good news. It was about time that female bodies got tougher. He presented these women as a strong and united front. They’re sexy without being weak and soft. This scared some people. That’s where the bad news enters the picture.

Many art history texts talk about Les Demoiselles d’Avignon with racist terminology. They describe the women as “savage” and “primitive”1. Today we may cringe at these terms, given the African masks. I know I did. There’s no reasoning behind these terms. They’re dismissive and reductive all at once.

It’s true that Picasso drew the mask imagery and shape formations from African art. But it was the Spanish painter who brought those references into the red light district. Picasso knew these Spanish sex workers. He painted what he saw in them. Perhaps he saw them as wearing masks. This would make sense considering the nature of the work they did.

Picasso changed the art world in 1907 when he painted Les Demoiselles d’Avignon. This painting was so damn seeductive. But it was also scary different from the eroticism in the beloved paintings that came before. So, many art lovers clung to these past loves. They labeled this new take with terms like “vicious” and “ugly”2. That’s not just fear talking. It’s also nostalgia for a softer form of feminine sexuality. Picasso’s women are faced forward even with a back turned to us. They know their power. It’s naked and free of makeup or any feminine accessories. These women are desirable no matter what they look like.

They’re sex workers. It’s their job to drive people wild with lust. No matter what they wear or how they stand, there will always be men lined up for their services. That’s got nothing to do with them and they know it. This is why some of them wear masks. The masks and distorted idealizations of these faces conceal their actual identities to make them anonymous. That only increases their power in Picasso’s depiction.

They’re also still feminine. The viewer may not recognize these women But it’s clear from their stalwart stances, they know themselves. These are iconic, indomitable women. There’s no need to be scared of them. Maybe we can learn to stand a bit stronger in our female bodies thanks to their example instead.

Picasso drew inspiration from African art, Cézanne, and Iberian sculpture when he painted Les Demoiselles d’Avignon. He also portrayed women he knew from his hometown neighborhood. These denizens of strength were sex workers in Barcelona’s red light district. Picasso was born in Avignon and it’s also where he met these models.

Where can I see Les Demoiselles d’Avignon by Pablo Picasso in person?

You’re in luck! The Picasso masterpiece Les Demoiselles d’Avignon lives in the Museum of Modern Art in New York City. It’s enormous at eight feet by about seven and a half feet. The women depicted are thus larger than life. I love the impact their size has on viewers. They overwhelm and impose with tremendous power. It’s exciting and profound after more than a hundred years. This is a bucket list painting, people. Get to NYC and see it. I insist.

Golding, John Visions of the Modern, University of California Press, 1994.