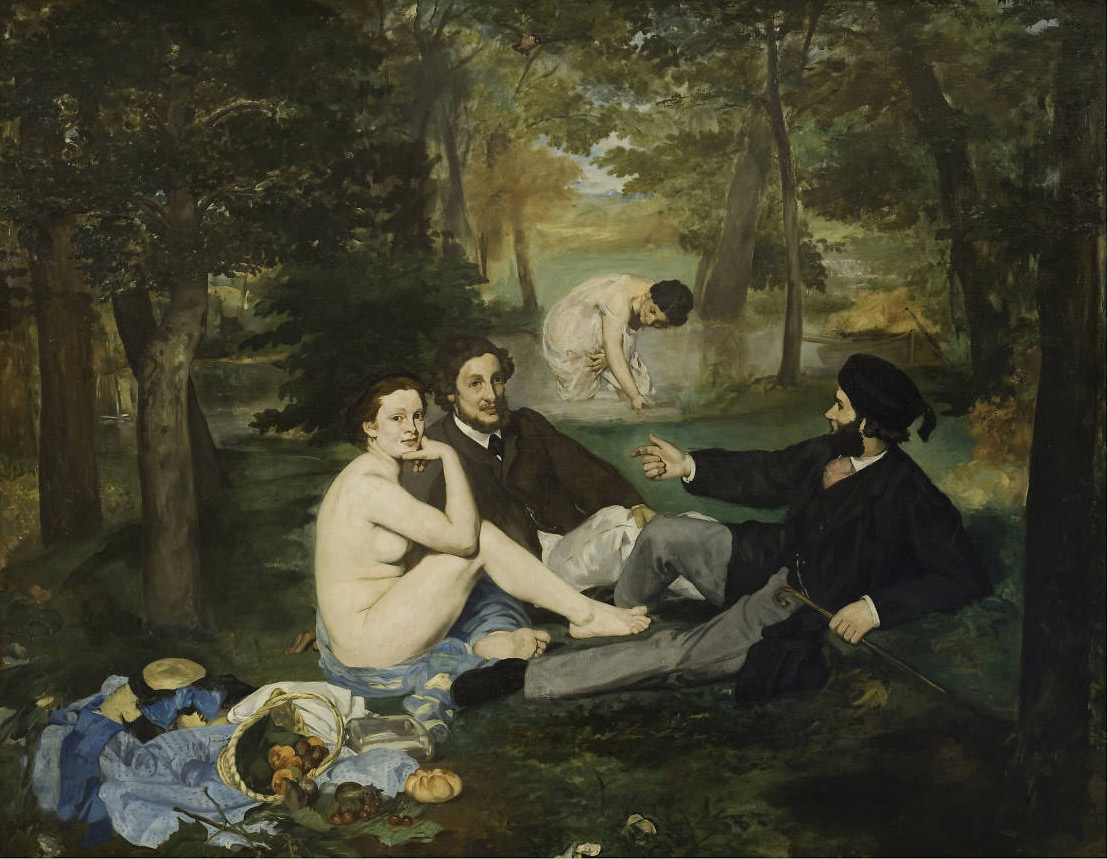 Why is Édouard Manet’s Luncheon on the Grass or Le Déjeuner sur l’herbe a masterpiece?

An audacious inspiration, Luncheon on the Grass launched the salon of the rejected. In France, called Salon des Refusés, this formed in 1863. That was the year the venerable Paris Salon rejected more than five thousand artworks. Many of these rejects later earned the title “masterpiece”. Le Déjeuner sur l’herbe (the french title) sets a perfect example. It was a shocker. The unidealized and central nude figure among clothed compatriots stunned viewers as did Manet’s iconoclastic technique.

His visionary way of painting summed up the figures with few shades of light and dark. This set them off as quite distinct from the lush, natural, and varied background. As a result, Manet’s male dandies seem overdressed and a bit ridiculous in their ultra formal wear. They’re costumed in uptight society’s weighty trappings. These two men also look askew; one gazes toward the other, who looks off into space. But the woman faces us with bold directness. She’s naked and a bit bemused, without shame or flirtation.

Another woman at the back of the painting searches in a pool of water, lifting her skirt as she tries to keep it dry. There’s a bit of unreality in the perspective on this woman. In our minds, she stands at the back of the scene. But on Manet’s canvas, this woman appears right up against the other figures. It seems like she’s nearly touching them, though the river she stands in is set back far behind them.

Manet depicts the figures in an authentic manner. This is how people look. Yet the scenario also seems ludicrous. It’s a luncheon where nobody seems to care a whit about the food. In fact, the lunch lies in the grass, tossed aside. Instead, they gaze off into nothing, or pose with casual nudity among the clothed.

With this subject matter, Manet calls painting traditions into question. He shows how notions of class and propriety seem old fashioned and banal. After all, the most interesting figure in Luncheon on the Grass is the nude woman. But she doesn’t have the idealized body common to status quo masterpieces. Instead, she’s got a real woman’s figure and seems indifferent to our opinion of it. 1863 society saw these women as “commonplace”. Their lack of traditional clothing telegraphs these women as promiscuous by standards of the time.

Although Manet lived a Bourgeois lifestyle, he loved to question these standards. His work also embodied equal parts conformity and rebellion. That’s key to why many art historians refer to Manet as the “father of modern painting” and the “first modern painter”. We see this modernity epitomized with Luncheon on the Grass. In this work he references classic works of art by masters such as Giorgione and Titan.

But Manet also subverts the status quo with his unnerving subject matter and startling new technique. He wanted his work accepted at the Paris Salon; which illustrates his conformist side. However, Manet’s goal was also to shock the esteemed exhibit’s organizers and visitors. These opposite aspects in Manet’s character entwined to make him a truly modern painter.

Manet swept a paintbrush over the boundary between objectivity and subjectivity. His work catapulted the art world from a choice between realism and idealism into a new horizon where they shared space on a single canvas. Traditional paintings before Luncheon on the Grass often featured nude nymphs, at ease with their lean, water sprite bodies. It wasn’t the nudity that made Le Déjeuner sur l’herbe such a stunner.

Manet filled this canvas with ordinary, everyday people. He set his favorite model, Victorine Meurent, dead center. Manet stripped away all social pretenses from her fleshy paleness. She’s looking right at the viewers, society’s invaders and critics, as if daring us to judge or join her. The scene unsettles viewers thanks to Manet’s adroit union of reality and unreality. It feels so real, thanks to his uncanny rendering. But the chances of an encounter such as this in any forest are slight to none.

In the Impressionist heydey a Paris dandy was called a flâneur. These were literary and artistic gentlemen who made art of idleness. Manet ranked among them as an arbiter of taste and style. He was meticulous in grooming and fashion, much like the gentlemen in Luncheon on the Grass. I see the painter reflected in their attitudes about the women between them. They match the casual countenance of the ladies. It’s no big deal to these gentlemen that a nude woman sits inches away.

Artists develop this same sort of comfort and indifference to nude bodies when they paint them. It’s ironic because while the form and features of model bodies capture their full attention, the humanity and sensuality fall away under a paintbrush. That’s what I take away from Luncheon on the Grass. Manet gives us a new lens on a nude figure here. She’s matter-of-fact rather than seductive or abashed. This is a modern, imperfect woman who knows herself and likes her body. No wonder society’s elite taste arbiter feared her. Luckily, she didn’t need their approval and kicked off the future of modern art anyway.

Luncheon on the Grass – FAQs

Where can I see Manet’s masterpiece Luncheon on the Grass in person?

Art world shocker Luncheon on the Grass AKA Le Déjeuner sur l’herbe lives at the Musée d’Orsay in Paris. In fact, many paintings from the Salon des Refusés now hang on the Orsay walls.

But this was not Manet’s first version of Luncheon on the Grass. He painted a smaller one before it which now graces the Courtauld Gallery in Somerset, England.

What’s the story behind the painting Luncheon on the Grass by Édouard Manet?

Art historians have called Luncheon on the Grass Manet’s family portrait. Many also believe the landscape of the painting is meant to be l’Île Saint-Ouen. This area was close to his family property in Gennevilliers.

His favorite model, Victorine Meurent, posed as the central figure. While Manet combined his brothers, Eugène and Gustave Manet to create the male on our right. The man on our left was based on his brother-in-law, the Dutch sculptor Ferdinand Leenhoff.

What inspired Édouard Manet to paint Luncheon on the Grass?

Manet loved the Italian masters and was likely inspired by several when he painted Luncheon on the Grass. But it matches especially well with the classic by Giorgione called The Tempest. Both masterpieces spotlight a woman’s unexpected nudity in a woodland setting.

In the Giorgione painting a traveler encounters a woman breastfeeding outside in a public setting. While in Manet’s piece we, the viewers, confront a nude woman having a casual picnic in the forest.

Enjoyed this analysis of Luncheon on the Grass?

Check out other artworks by French masters.

See Luncheon on the Grass at the Musee d’Orsay online

Fried, Michael (1996). Manet’s Modernism or, The Face of Painting in the 1860s. Chicago: The University of Chicago Press.

Boime, Albert (2007). Art in an Age of Civil Struggle. Los Angeles: The University of Chicago Press.