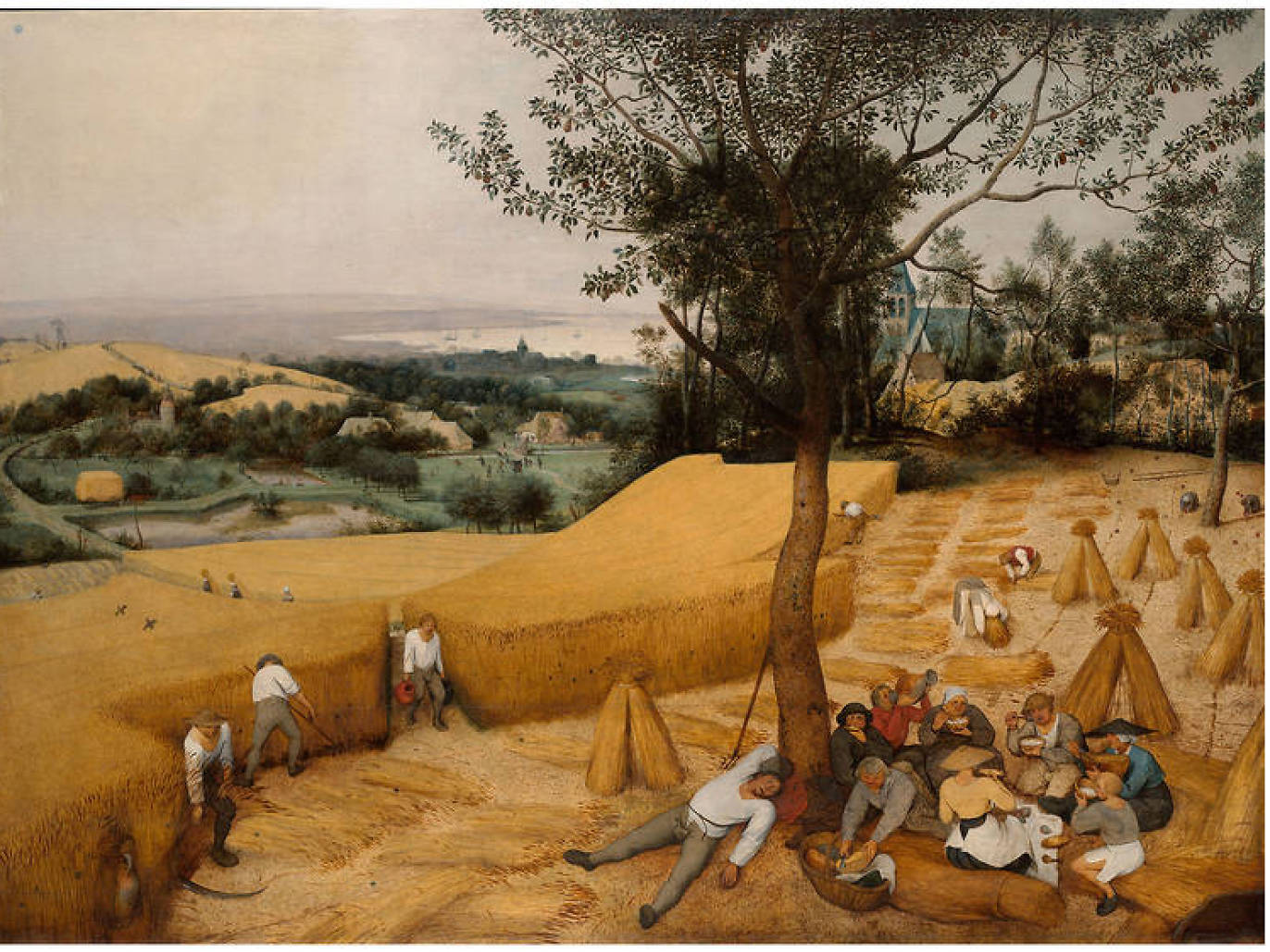 What makes Pieter Bruegel’s painting The Harvesters so significant?

The Metropolitan Museum of Art calls The Harvesters “the first modern landscape”. Pieter Bruegel also shifted the Renaissance paradigm with this masterpiece. He transported the art world from biblical and classical subjects into everyday people. That’s why Bruegel the Elder became the “peasant painter”.

Humanism in art began to take precedence over idealism. This masterpiece epitomizes this with its down to Earth subject matter and tone. These are everyday people doing ordinary work. Their hands are rough and dirty. They bend with the weight of working a field.

One of the harvesters rests under a tree with unbuttoned pants – deflated. Behind him a sea of golden wheat awaits threshing. It seems to drift into eternity, reminding us that there’s always more work to do. This serves as comfort to know that as long as the grain grows, there’s opportunity and purpose in the field. Nature holds promise in this glorious scene. It provides food and employment.

That’s why I love the rich, golden glow of The Harvesters. Gold symbolizes bounty and this piece reflects on the wealth we can find in a satisfying job well done. Bruegel didn’t romanticize or idealise these harvesters. He painted them from observation and without commentary or judgement. The painter gets the job done quite matter of fact. This mirrors the activity in the painting. Bruegel brings us into the scene like a worker showing us his fellows.

Bruegel’s realistic depictions also draw us in with the wonders of nature. It’s not only a portrait of workers, though it is entitled The Harvesters. This masterpiece revels in a gorgeous landscape as well. The vivid gilding reminds me of the rich nourishment nature provides. Bruegel pioneered the practice of peasant painting. But he also captured the resplendent power of the natural world. All we have to do is plant, nourish, and harvest. Nature then gives back in triplicate.

This painting was part of Bruegel’s seasons series. The Harvesters stands opposite his masterpiece Hunters in the Snow, which portrays a cold, snowy, hunting scene by a frosty, blue, lake. Where the harvesters’ painting blooms in warm, golden tones of plenty, the hunters’ masterpiece chills us with longing.

In Bruegel’s winter painting, the figures perch high on a hill, eager and ready to attack. While the harvesters are bent or resting after a hard day’s work. These scenes illustrate the cyclical ways of the world. In the 1550s when Bruegel painted this series, people hunted and harvested or they didn’t eat. These were the facts of life at the time.

That encapsulates how revolutionary Bruegel’s season series was. He brought the art world back down to earth. After the decadent passion and piety of Michelangelo, this was grounding. Bruegel thus launched a humanist movement in art. This shifted the focus from the heavens to fields and streams. Michelangelo portrayed God and angels in ceiling frescos.

After Bruegel, painters began to highlight everyday tasks with oil on either board or canvas. This opened up the Renaissance to more artists at various income levels. The art world expanded. Not everybody can lay on their back and paint the Sistine Chapel. But many can find a board or canvas for painting. As The Harvesters provides a bountiful landscape, Bruegel also democratized art and added variety.

Why was Pieter Bruegel called the Elder?

Pieter Bruegel was an iconoclast of the 1550s. He also fathered another famous painter named after himself. So, in order to distinguish between the two popular Peters, he took the title of Elder.

Bruegel the Elder’s peasant paintings altered the direction of art history. He shifted the paradigm of Renaissance religious idealism to a more humanist artistic point of view.

How many paintings did Pieter Bruegel the Elder paint?

Bruegel released about ninety seven paintings in his lifetime. He also created hundreds of drawings. His artworks grace the world’s finest museums and include many notable masterpieces. Pieter Bruegel the Elder’s most well known works are the seasonal series of peasant paintings.

Each painting represents a different season. For instance, The Harvesters portrays hard work on a hot summer day. While Hunters in the Snow depicts peasant hunters engaged in a winter hunt.

Where can I see The Harvesters by Pieter Bruegel in person?

This masterpiece by the Dutch painter, Pieter Bruegel lives at the Met Museum in New York City. They also offer a wonderful audio guided tour you can listen to on headphones while viewing the painting. It helps shed light on what makes this 1565 masterwork so special.

Check out these other essays about landscape paintings.

Joseph Leo Koerner, Bosch and Bruegel: From Enemy Painting to Everyday Life (The A. W. Mellon Lectures in the Fine Arts), 2016, Princeton.

Check out The Harvesters at the Met Museum online

Meganck, Tine Luk Pieter Bruegel the Elder: Fall of the Rebel Angels: Art, Knowledge and Politics on the Eve of the Dutch Revolt, 2014, Milan.