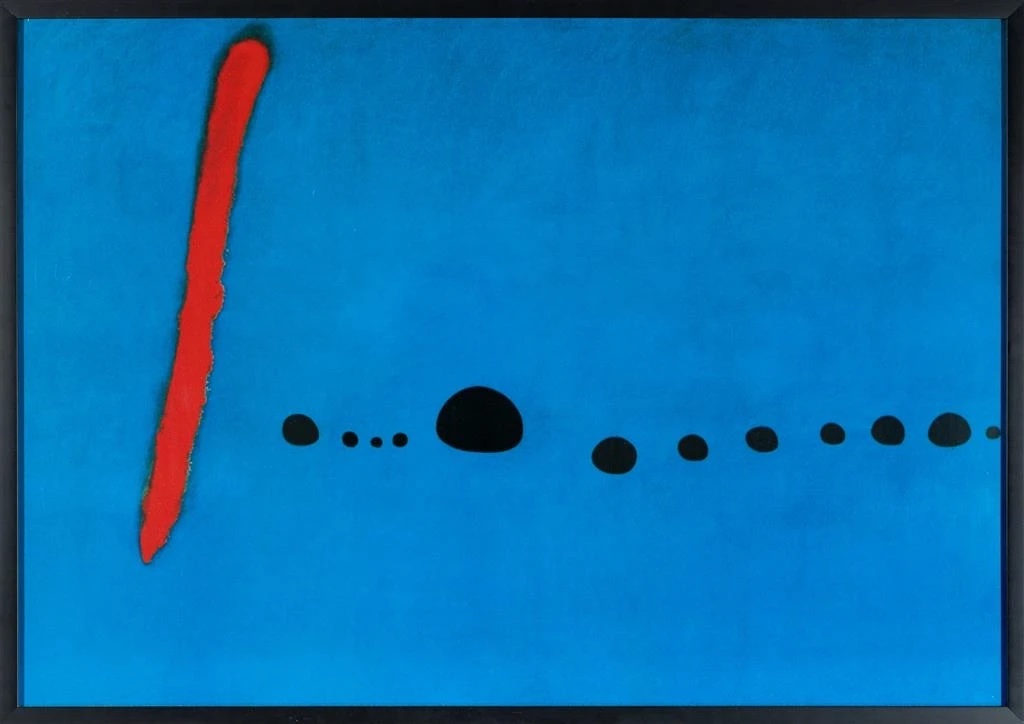 Joan Miro’s Bleu II punctuates the middle of a three part series. This one sits at center for good reason. It grounds the blue triptych with solid strength. Red slashes one side of the blue canvas, yet this masterpiece seems balanced. My favorite thing about Miro is the way his imagery shifts between recognition and intrigue. We see that with this Zen garden masterpiece on a bed of brilliant cobalt.

The slice of red to our left creates a dramatic, dead stop to the trail of sooty pebbles. It looks a bit like a bleeding wound. This reminds me of a scar and how baggage from the past can hinder forward motion. Here the red slash serves as a stop sign for the stones traipsing across the canvas center.

Those black blobs seem to trot as if alive. They remind me of the charming soot sprites from the movie Spirited Away. Manic, pixie balls of coal dust, the creator Miyazaki called them Susuwatari. Joan Miro marches the musty clumps across Bleu II in much the same way Miyazaki animated his coal dust. Both artists bring their balls to life with slight variations in shape, size and placement. This gives them an organic quality. They’re on the move.

These pebbles feel familiar. They could be ink droplets, yarn balls, boulders, or any other sphere in motion. But no matter how recognizable they appear to viewers, we also can’t really know what they are. Instead we can only ponder what they may represent. This contradictory combination of mystery and understanding pervades Miro’s work. It’s why many in the art world consider him the “ultimate Surrealist”. Given the rebellious nature of Surrealism, it’s no surprise that Miro rejected any labeled categorization of his work.

Miro traversed his painting career as an experimental explorer. He started with Fauvism. Then shifted into Magical Realism and, ultimately Surrealism. But Joan Miro never landed in any one art movement. Instead, he pushed each one to extremes and blurred their boundaries. For instance, he influenced the Lyrical Abstraction movement with paintings like Bleu II. Lyrical Abstraction works as a sub-type of Abstract Expressionism. It brings together different painting techniques to subvert the traditional ideals of each. For instance, this Miro masterpiece combines Minimalism with Abstract Expressionism.

What is Minimalism in Visual Art?

Artistic Minimalism describes art that exposes the essence of a subject matter by removing its non-essential features. That means it strips the depiction down to only the subject’s most integral assets. Artistic minimalism is defined and identified by specific developments in post–World War II Western Art.

Minimalism shines through Bleu II with Miro’s simple composition as well as his essential take on the subject matter. He gives us only the most imperative elements to consider. Yet Miro’s message resonates clear as a bell. There’s inherent rhythm to the painting. The objects seem to move and draw our eyes across the canvas. We thus engage in a feeling of both understanding and mystery intertwined. That was the magic of Joan Miro’s work. He was comfortable with experimental techniques. In fact, Miro sparked Surrealism with his automatic drawings in the early 1920s. He later declared a desire to “assassinate painting”.

Miro talked about breaking the Bourgeoisie art tradition. He fought what he called propaganda and appropriation of artwork by the wealthy. We can see this in his radical pieces like Bleu II. But his words on the topic are striking and unforgettable as well. He once said of Picasso’s paintings, “I will break their guitar,” about his goal to attack the popularity and embezzling of Picasso’s art by Bourgeoisie politics.

What is the Bourgeoisie?

The Bourgeoisie are defined as the middle or upper middle class. This group is distinct and contrasted with the common man by their wealth and power. Sometimes this social group is categorized into a petty (petite), middle (moyenne), grand (grande), upper (haute), and ancient (ancienne) bourgeoisie. But most often they are the upper crust social class.

I love the way Miro’s work, especially Bleu II, disrupts artistic traditions, such as those promoted by the Bourgeoisie. He ruptures the patriarchy with this simple, peaceful story unlike anything that came before in the art world. Miro gave us the gift of his rare and wondrous way of seeing the world. When I look at the three Bleu paintings one of Miro’s quotes always comes to mind. It seems he was telling us where this work originated in his mind’s eye with these words.

The spectacle of the sky overwhelms me. I’m overwhelmed when I see, in an immense sky, the crescent of the moon, or the sun. There, in my pictures, tiny forms in huge empty spaces. Empty spaces, empty horizons, empty plains – everything which is bare has always greatly impressed me.

From this celestial imagery, I see how Miro looked to the sky and then pulled that heavenly magic down to Earth for us to ponder.

Where can I see Joan Miro’s Bleu II in person?

Bleu II by Joan Miro unites a three painting series on the walls of The Centre Pompidou in Paris, France. This triptych exemplifies Miro’s obsession with abstract but familiar subjects portrayed within vacant dreamscapes. All three paintings depict small, black shapes on a vast cobalt blue background. But Bleu II stands out as the most animated and distinct beauty in the set.

Joan Miro spoke about his reasons for painting Bleu II. He said the vastness of the sky overwhelmed him. They reminded him of his own smallness and thus inspired Miro to portray “tiny forms in huge empty spaces”.

Separately, Miro also explained that he loved painting because it helped ease his depression with self expression.

What distinguished Joan Miro from other artists of his time?

Joan Miro was a Spanish painter, specifically he was from Barcelona and thus Catalan. That explains the unique spelling and pronunciation of his name, which many find challenging. Miro’s artwork was experimental and groundbreaking which also set him apart from his peers.

He was a masterful painter and sculptor who influenced large swaths of the modern masters including Abstract Expressionists, designers, photographers and even composers. Miro’s work remains popular and valuable, with works selling for upwards of $26million on the open market.

Enjoyed this analysis of Bleu II?

Check out more essays on Spanish painters with a click.

Click for an interactive soundscape of Bleu II by Joan Miro