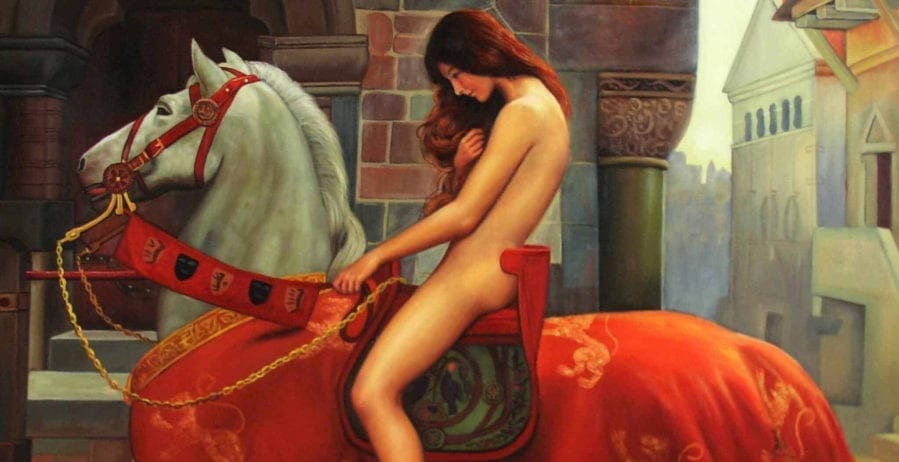 Folklore and history intersect at the story of Lady Godiva. A noblewoman of the 11th century, she’s still talked about today. That’s because she earned the ‘Noble’ in her title. Women of her time held little power other than the gaze of men. Lady Godiva weaponized her breathtaking beauty. She used this power to help the downtrodden in her sovereign husband’s territory.

Known as Coventry’s ancient legend, the tale of Lady Godiva stays alive. That’s thanks to its salacious blend of chastity and shock value. These days there’s a resonant questioning about the validity of history. What do we know for certain? How do we know it? History’s told by the powerful. We remember stories because a storyteller held us rapt – capturing all our attention. That’s how influence works. But hard evidence also helps.

Lady Godiva’s story portrays a real and virtuous woman. There are historical records to prove she existed. So, Lady Godiva was real. The virtuous part, though, comes from the story we still tell about her. It’s a crucial element but may be a mere myth. Those of us who’ve heard the story mostly remember Lady Godiva’s nude horseback ride. Thus, for the uptight storytellers of yore, her chastity was critical. We gotta love her – right? Can’t do that if she’s not chaste. Not in those days.

In the 1040s Godiva’s husband, Earl Leofric of Mercia, levied heavy taxes on Coventry. We know this part of the story to be true. There are records from the time and they reveal Leofric’s high taxes. Records also show lower taxes some time later. Leofric’s wife wasn’t actually named Godiva on paper. She was Godifu. But that’s no biggie. Anybody who’s seen Old English writing knows how funky their spelling seems to us now. The truth gets muddy after this proof of her existence, though.

Turns out the juiciest part of Lady Godiva’s legend – her nude horse ride – likely serves as more myth than history. The book Lady Godiva: A Literary History of the Legend by Daniel Donoghue explores this. He explains how chroniclers at the Benedictine abbey of St. Alban concocted her naked horseback story.

Although their motive remains unknown, the impact is clear. The tale served as keen Coventry tourist marketing. No matter their intention, these monks invented a sexy origin story for the town. It worked so well, people visit Coventry even today to take pictures with the statue of Lady Godiva.

The Story of Lady Godiva

Earl Leofric loved his taxes. It was such a strong love that he lost touch with the people of his land – Coventry. According to the legend though, his wife, Lady Godiva, cared deeply for Coventry citizens. She pleaded with him to lower the taxes. Paraphrasing here. Coventry must choose between food and rent, Godiva told Leofric. Please ease this burden so they can feed their children.

Her immovable husband mocked this concept. He called her a hypocrite. After all, she liked her fine clothes and the way people looked upon them, Leofric pointed out. Would she be willing to give up all that? It’s a valid question. Bitchy but true.

The high taxes were paying for her finery. But Lady Godiva was no hypocrite. She doubled down on Leofric’s cold proposition. Lady Godiva agreed to trot through the town square naked on Market Day. Riding above the pedestrian citizenry on horseback would likely keep her semi-safe.

The tale turns supernatural here. Storytellers give Lady Godiva an invisible security cloak – her chastity. It even has magical powers. This is when archetypal character Peeping Tom enters center stage. He doesn’t appear in the Lady Godiva legend until the 1600s. That’s about 500 years after its creation. But once Tom shows up, the story’s never the same.

Coventry citizens knew Lady Godiva was coming. In fact, she sent ahead a herald with a horn to notify them. Out of respect for her ladyship, they hid inside with the shutters closed. This was to honor her good deed. But a horndog named Tom ignored this thoughtful plan. He peeped. Depending on which legend you read, this cursed him with blindness or death. Either way, he paid the price for peeping.

This was an apt way to maintain Lady Godiva’s chastity. Yes, she rode through town without a stitch of clothing. But her aim was true. She sacrificed for the greater good of the people. That’s the heart of this legend. It’s also why Tom’s cursed. He did the opposite. All he cared about was Tom. So, in the end, he’s gone down in history as the iconic creep.

It’s easy and quick to discover Lady Godiva’s story yourself. Just read the 1842 poem Godiva by Alfred, Lord Tennyson. He wrote it hundreds of years after Lady Godiva’s life. But the story flows easy from start to finish. Also its perspective teaches us why this women still matters.

Tennyson focuses on Lady Godiva’s chastity. He portrays her chaste dignity as powerful. It even rouses fear in the Coventry air. Clothing may cover people’s bodies. But according to Alfred, Lord Tennyson, chastity does far more. It quiets wind to protect and honor the innocent. Lady Godiva was technically naked. She’s also a hero, though. So, Tennyson clothes her with a magical chastity cloak that shields her better than armor.

Then she rode forth, clothed on with chastity: The deep air listen’d round her as she rode, And all the low wind hardly breathed for fear.

This poem points to the challenge we all face as humans. Our experience as mere individuals isn’t enough. We must sacrifice to something greater than our singular selves. In the case of Lady Godiva she relinquishes her dignity. She endures indecent exposure for the sake of her people. Throughout history the measure of a woman’s value diminishes with such nakedness.

That’s true even today. It’s why Tennyson spotlights her chastity in his Godiva poem. Yes, this lady’s naked. But she’s also the exception. Her integrity makes Lady Godiva special. She has a higher purpose. Thus, the people look away from her nude body, in deference to this honorable mission.

Sculpture also reveals how crucial chastity was to Lady Godiva’s heroism. In the Tennyson poem and many versions of the legend, Godiva’s long hair covers her nakedness. He describes her tresses as rippled ringlets. They worked like a strategic curtain.

Half-dipt in cloud: anon she shook her head,
And shower’d the rippled ringlets to her knee.

Sculptures portray her long hair shielding viewers from full frontal Godiva. In some she slouches to hide even more with a tucked head and tactical arms. Check out John Thomas’s marble statue from 1861 above. Our lady bows with humility – a martyr. Artists immortalize the best of a subject in sculpture. It serves as an everlasting memorial to those key attributes. Thomas chooses to highlight her shame.

This implies a resounding sense of her chastity. It’s also pretty darn judgemental. She’s a hero. Remember? It seems that history and art only shower her with accolades because she was also chaste. What if she weren’t? A heroic woman can be proud with real blood in her veins. Storytellers need not color female heroism with only one virginal paintbrush. Check out the sculpture below for an example. This Lady Godiva sculpture graces Coventry today.

This bronze Godiva perches naked but straight-backed with confidence. Sir William Reid Dick erected this Lady Godiva in 1949. This later date helps account for the more brazen portrayal. Sir William had the luxury of a less judgmental contemporary point of view on our hero. She’s honorable, heroic, and unabashedly naked. Viewers may also note her beauty. But Lady Godiva’s honor and dignity matter most.

That’s what sets her apart from other historic figures. It makes her a hero. She’s quite an example for Ms. Behavior. We have to step outside ordinary bounds of life to change the course of history. Leofric held the reigns. But without Godiva’s incredible deed, he’d have changed nothing. The people of Coventry would have starved. So, with her bare body and dignified trot through town, Lady Godiva saved lives. That’s why her story’s more than a myth or even legend.