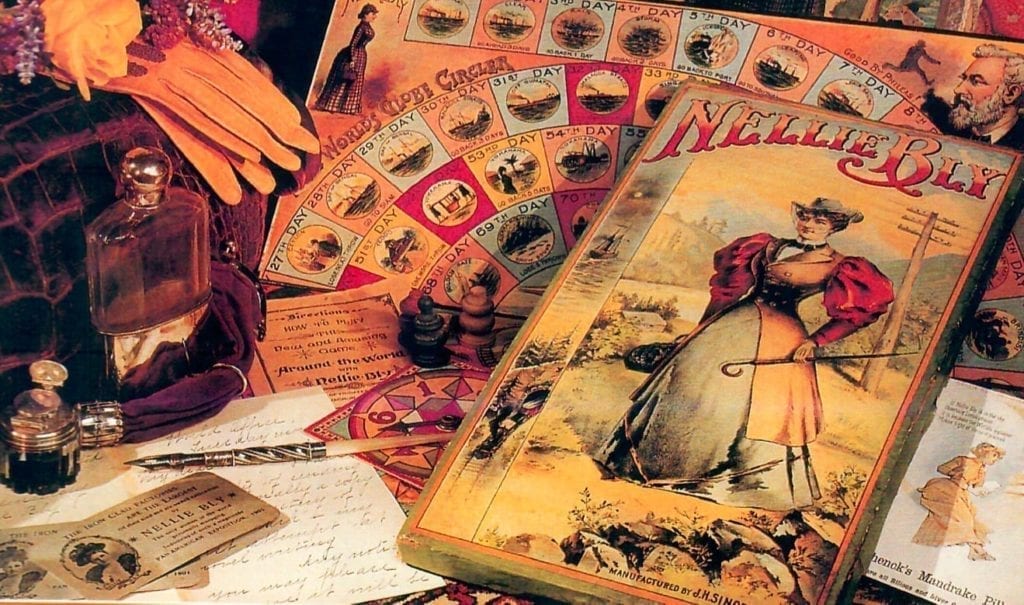 A memorial to Nellie Bly is coming soon to Roosevelt Island, NYC. This was the site of her first journalistic adventure. But back then it was called Blackwell’s Island. She spent her Ten Days in a Mad-House there. This story remains the most familiar and historic Nellie Bly adventure.

Rule breaker and risk taker Nellie Bly lived full blast. She trail-blazed across centuries as a pioneering journalist and world traveler. Still, there’s not much writing available on Nellie Bly beyond her own. In fact, until 1994, the only books about her were either shorties for kids or those she wrote. Lucky for us Bly reveals herself in these writings. That’s how Nellie Bly created the concept of Intrepid Reporter. She played a central role in her stories.

Her work helped many oppressed women. So, it’s perfect that artist Amanda Matthews created the The Girl Puzzle memorial for her. In the sculpture field Nellie Bly leads at the helm. She backs four of the women and girls from her interviews. Mirrored balls grow in size to reflect how Bly’s voice amplified over time. Roosevelt Island Operating Corporation will bring us this memorial in late 2020. The poignant sculpture garden will grace Lighthouse Park on Roosevelt Island.

Nellie Bly’s 10 Days in a Madhouse

This story begins with Nellie Bly feigning insanity. She did it to get committed to an institution. It was all to impress Joseph Pulitzer, her new boss at the New York World. She wanted to expose corruption and abuse within asylums. Once inside the institution at Blackwell’s Island, Bly recorded inhumane conditions. What she discovered inside would drive anyone insane. In fact, many of the women tethered there weren’t the least bit off kilter. Instead they were recent immigrants who didn’t yet speak much English.

Nellie’s six part series on Blackwell’s Island changed the course of history. Thanks to Ten Days in a Madhouse a grand jury investigation convened. Thus these institutions created more humane regulations. Her undercover work ignited a blowtorch to old rulebooks. Afterward Nellie Bly continued more gambits like this. As a woman, she was often ignored or at least underestimated. Thus, Bly infiltrated sweatshops, jails, and even Congress; where she exposed bribery and corruption.

Around the World in 72 Days

Nellie Bly loved a challenge. She took Jules Verne’s book Around the World in 80 Days as a provocation. So, in 1889, Bly announced her plan to beat that timing on a solo mission. Nevermind that the book was fiction. She’d make it real. This was before airplanes. Women rarely even traveled alone. So, an unchaperoned woman was quite a shocker. But Nellie pushed boundaries even further. Not only would she travel it fast and alone. She’d also do it with very little luggage.

Plucky with a zest for self-promotion, Nellie Bly beat the Jules Verne challenge. She traveled round the world in only 72 days. The resulting book revealed the good, bad and even ugly about herself. Although a celebrated writer, Nellie wasn’t well schooled. She was eager to learn through experience, and it comes through in her work. That often translates to ignorance about the cultures she visited on this trip. For instance, Nellie Bly didn’t respond to foreigners with empathy.

Her reactions to other cultures were callous. That she chose to share them in the book belies lack of judgement. Around the World in 72 Days Bly calls Asians “repulsive”. Nellie also compares Mexicans to “dogs” in the book. It seems clear that Bly was only passing through on her historic journey. This was a stunt for her. She’s the grandmother of Investigative Journalism. Bly reveals what was possible for a woman in search of a story. Yet Nellie serves as a wake up call to black and white thinking. She’s a hero in one sense – a caveat in another.

Let’s celebrate her good work and heed her mistakes. Risk taker Nellie Bly dove into her stories. Sometimes this lack of guile served the story. She rescued vulnerable people from harm. But her method could also be cruel.

We can learn a lot from Nellie Bly. She deserves a celebration for certain. This woman made history. She made the world a better place. Nellie Bly’s a SheRo because she’s a hero. She achieved numerous firsts, including fast and solo world travel. But as exceptional as she was, Nellie Bly was also a woman of her time.