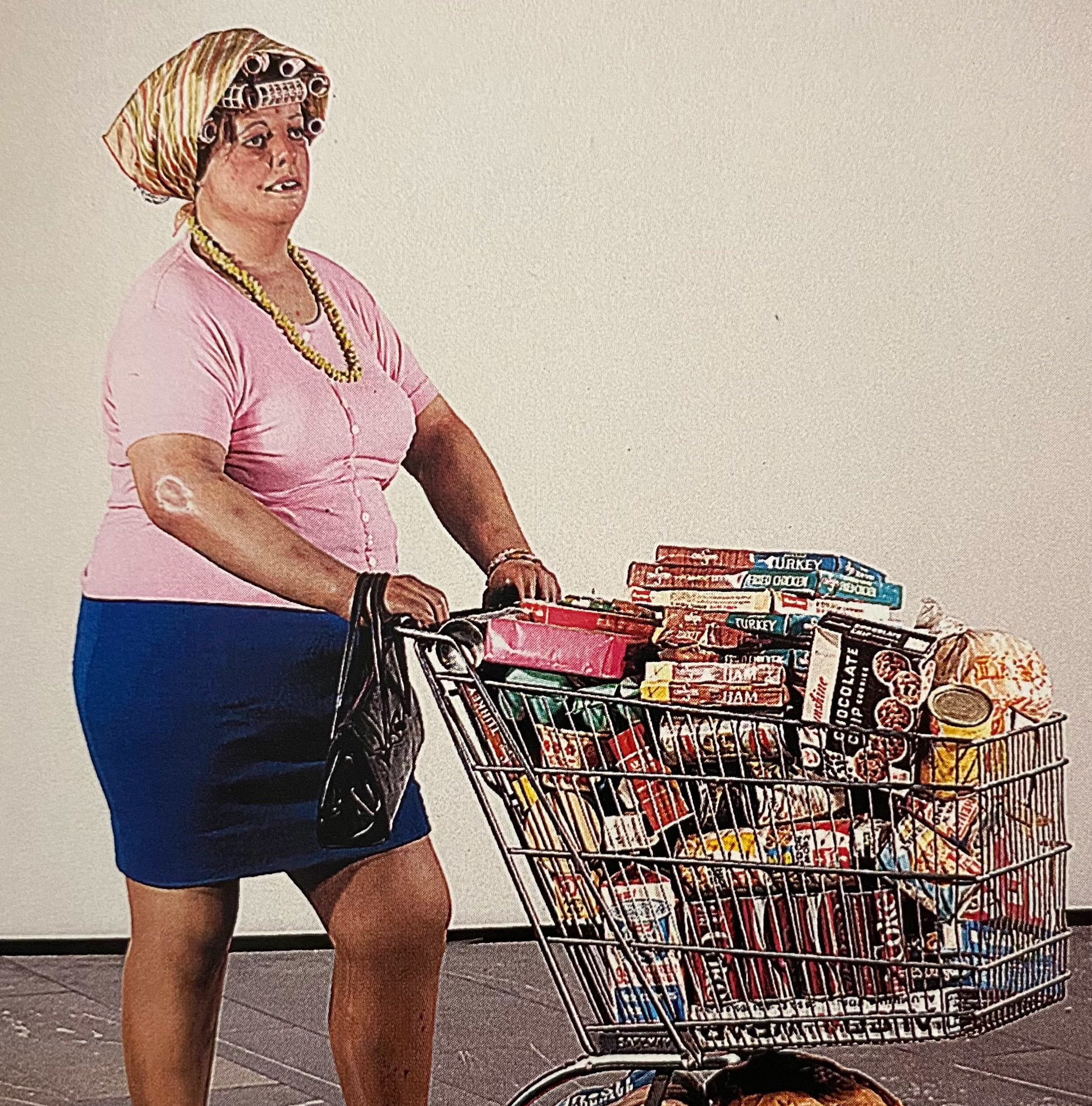 Duane Hanson’s Supermarket Shopper feels so familiar. But it breeds more depression than contempt. When you see this hyper-realist sculpture in person, it feels like an emotional roller coaster. At first, viewers are a bit stunned. Why does this lady push her grocery cart in a museum? Then it sinks in. She’s frozen like a statue. Is this a hidden camera show? Trigger for a flash mob? Oh right, I’m in an art museum. It’s art. That’s when outrage or fear will shift into interest. This sculpture demands a deeper look.


It may feel a bit creepy to get in close. Not only because this lady seems so real. The discomfort comes through most in Hanson’s message. Supermarket Shopper embodies resignation. She’s given up on cooking. Her cart’s piled high with TV dinners. Why bother to take out the curlers in public? This apathetic portrait telegraphs blah. She’s done with trying. The piece evokes depression vibes and all the emptiness that entails.


Duane Hanson built this from a live model. First he made molds of a woman. Then the artist filled them with resin. He cleaned this sculptural form. The reality of the subject comes through in the next steps, though. Hanson airbrushed and then accessorized her with shoes, handbags, wigs, and clothes. He played dress up with his artwork. But the playfulness hit a dead stop upon completion. There’s nothing funny about Supermarket Shopper. Her loneliness hangs in the gallery air like a toxic cloud.

Duane Hanson created a multitude of exhausted figures like Supermarket Shopper. But she stands out in several ways. In fact, being on her feet sets her a bit apart. Most of Hanson’s figures are sitting. This makes sense because his work represents popular culture. Much of our society sits most of the day. The shopper isn’t the only standing figure. But the majority of Hanson’s standing sculptures are at work; for example house painters, cleaning crew, and construction workers.


The other typical Hanson stander is a tourist. Supermarket Shopper embodies a different kind of moment. It’s not special, like vacation; or challenging, like employment. There are fun shopping events. But this isn’t one of those. It’s misery. She’s not prepping for a party, just more loneliness…. and dinner on a tray. That makes this piece special. Hanson contrasts its sadness and estrangement with his fun figures.

Pinnacle examples sit on benches in museums and galleries. Their boredom’s so palpable, at first glance I assumed they visited the museum only for a place to rest. They have jaded, numb, faces and slumped bodies. It’s all a bit too much for them. If Hanson made these sculptures today, I bet they’d stare at cellphones. But this work’s from 1970. His vision was far ahead of his time. Here’s what Hanson said about how he saw his art in the 1970s.

The subject matter that I like best deals with the familiar lower-and-middle class American types of today. To me, the resignation, emptiness, and loneliness of their existence captures the true reality of everyday life for these people…. I want to achieve a certain tough realism which speaks of the fascinating idiosyncrasies of our time.

Art critics often describe Hanson’s figures as “stereotypical Americans”. This oversimplifies his work a bit. Supermarket Shopper strikes a pang of recognition in viewers, and not as a stereotype. She’s familiar because of her authenticity. It’s not that she’s just like any old lady in a grocery store. This particular woman reeks of breathtaking lethargy and indifference. From the way her hands barely grip the cart; to her droopy, sad sack expression, this is a specific person. I love the way her handbag hangs limp, looking like an empty, plastic shell. It reminds me of dressup purses I played with as a child. The curlers also define this character as much as they do her hair.

The grocery store works as an in between space for this woman. That’s what the curlers tell us. She’s still in the process of getting ready to go “out”. This store’s part of her sanctuary. It appears that she doesn’t need to fuss about getting presentable for the supermarket. So what are the curlers for? Perhaps a hot date with a TV tray and Bonanza. Poignant details like her shiny, kerchiefed, head make this woman real to viewers. Hanson made meticulous choices not to fit a stereotype. But to create a clear character. That’s why Supermarket Shopper feels as real today as she did in 1970.

Where can I see Supermarket Shopper in person?

Supermarket Shopper was the first in a renowned and popular series of “typical American” figures by Duane Hanson. The Neue Galerie – Sammlung Ludwig bought it right away after its first exhibition at New York’s OK Harris Gallery in 1971.

The masterpiece still lives at this Aachen, Germany gallery. Yet it has been through quite an ordeal over the past fifty years. That’s because Supermarket Lady was a worldwide sensation. She traveled the globe.

Unfortunately, that led to many injuries, including a broken leg in 1975. She has since been fully restored. So if you visit her in Germany, or at one of her special exhibits elsewhere, you’ll see her original state.

What is the artist Duane Hanson known for?

Duane Hanson is most known for his lifelike sculptures. They are often cited as a commentary of American society. In the 1960s he set ultra-real figures in gut wrenching and gritty situations. These include a back alley abortion, homelessness, and gang war.

But Hanson’s notoriety skyrocketed in the 1970s. He continued to create stunning, lifelike sculptures of people. Yet the societal references told a more subtle story. Instead of violence and agony, Hanson focused his vision on bored, exhausted, and resigned Americans in everyday settings.

Hanson built gruesome tableaus with his early sculptures in the 1960s. They created political and societal spectacle with often violent and hyper-realistic portrayals. When Hanson shifted course into softer stories such as the everyday life of a janitor or housewife, he destroyed many of his previous works.

In fact, Hanson sculptures before 1970 are rare and would rouse tremendous excitement in the art market. However, Hanson died in 1996 and little is known about these ghosts of modern art history.

Check out these other essays on American Artists

The Whitney has a cool video about Duane Hanson