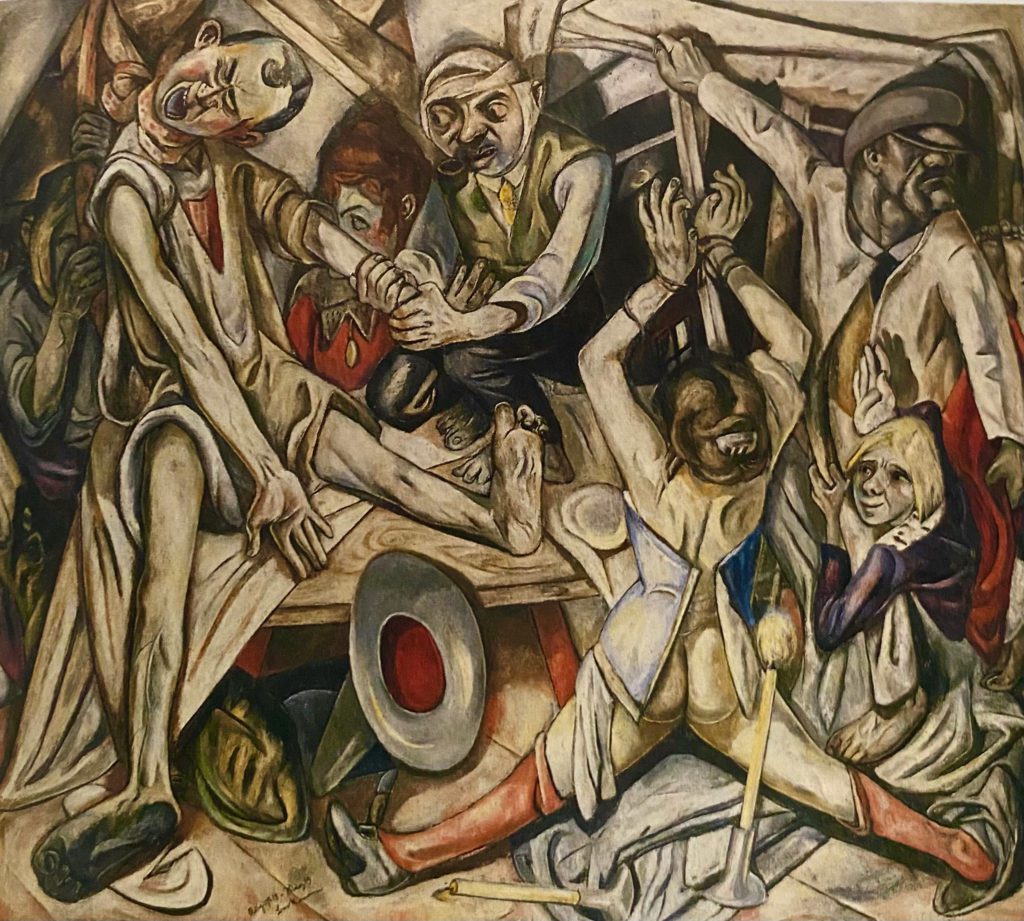 What makes The Night by Max Beckmann a masterpiece?

This painting, The Night, by Max Beckmann, dwells in the dark heart of World War I. The German painter was gung ho to fight in it at first. He joined as a soldier with a rush of enthusiasm. But Beckmann’s zeal soon wilted. It’s understandable. Soldiers and civilians alike tend to get weary while the world crumbles around them.

Beckmann’s war torn angst also shifted his artwork. After serving, he painted embattled nightmares. The war had devastated his personal perspective as well as his country. In The Night he portrays a horrific spectacle. Beckmann used his own family as models for this particular nightmare. But it’s a painful scene whether you know this or not. The painting shows how war rips apart a family in the form of violent home invaders.

Three intruders string up Max on the left side of The Night. One of them seems to twist his arm out of the socket. We can read the agony on his turned face. Behind the painter a dark figure pulls on the rope around his neck. Beckmann’s body splays. He spread his legs wide and holds a limp hand open to viewers. These details reveal powerless vulnerability. Also, notice the dark bottom of his bare foot on our left. This parallels Beckmann’s coloring of the perpetrators. For instance, a charcoal hue engulfs the man holding his noose in shadow. Beckmann’s use of this color points to the connection between predators and those who endure trauma.

Strategic red shapes in the painting also convey emotions. Most of The Night reads as bloodless beige. It gives the painting a reverb of shock and numbness. Often when we experience horror in real life, that’s the initial human reaction. Color drains from our faces when we’re stunned. The colorless figures here remind us of this jolted and blank feeling. Beckmann contrasts this with red bits to boost the impact.

There are only a few scarlet spots in The Night. But it reads much bloodier overall. Near the painting’s center sits a crimson circle. This hole at the core of the scene represents despair. Beckmann’s choice of red links it to human suffering. People bleed. But this inorganic object shouldn’t have a gory center. A darker shadow of death would make more sense here. In fact, black circles often sit near the center of paintings for this purpose. Check out Frozen River by Hendrick Avercamp for a classic example. Beckmann breaks this tradition. Instead, he gives us a pulsing circlet to symbolize suffering while alive.

Art Historians often point to The Night‘s composition as chaotic. But that’s only its resonance. We perceive disorder. Yet Beckmann constructed it with precision. He packs the scene with a careful, plotted incongruity. Sharp angles and obtrusive lines set us on edge even before the violent events register. So, when the horror of this scene hits us, it’s fierce.

The Night‘s ferocity also layers painting styles. That’s because the war changed Beckmann’s perspective and techniques. Before enlisting, he painted in Futurist style. This art and social movement of the early 1900s focused on speed, technology, and industry. Many Futurists supported the early fascists – especially Mussolini. They promoted violence as a solution to society’s ills. This aligned with Beckmann’s initial pro-military stance about the war.

Max Beckmann’s war experience shifted these views on violence. This also altered his painting style. It didn’t mellow, though. The war trauma amplified the brutality in his work. World War I ended in November of 1918. Beckmann painted The Night during 1918 and 1919. It doesn’t portray a technical battlefield scene. Still this portrait of barbarity roars with the turmoil of war. It’s a collage of worst fears realized.

Vicious raiders tear this family apart. They ripped off his wife’s clothes and bound her wrists. She hangs from them at an absurd angle, helpless and violated. That’s only one of many illogical positions in The Night. Beckmann reflected the senseless futility of war this way. He crammed the figures so close that the configuration seems impossible. Still, viewers see what’s happening in detail. These events combined with contortions and odd angularities evoke panic. It’s hard to look. That’s the point. Much like the impact of war, this painting makes an unforgettable, heart-wrenching imprint on us.

Why is The Night by Max Beckmann an important painting?

Max Beckmann’s masterpiece The Night represents an icon of its time. That’s because it portrays a tormented family as a symbol of war torn Germany. He painted it in the wake of World War I, which traumatized him and his country.

This painting also sparked the New Objectivity art movement. It epitomizes the period as well as this art genre. The Night uses a flat perspective. Figures intermingle in violent angularity. But there’s no depth to the scene. Bland tones also combine with jarring bits of red.

These techniques exemplify New Objectivity. They also disrupt viewers and leave an emotional impact. Much like World War I, it reflects the violence and instability of society with lasting effect.

What is the New Objectivity art movement?

The New Objectivity followed World War I in 1920s Germany. It’s sometimes also called Post-Expressionism. This genre of paintings reflected many artistic views of the period. The war devastated Germany. So Expressionist romanticism and navel gazing seemed self-indulgent to the traumatized survivors.

The painter Max Beckmann fought for Germany in WWI. He then painted an iconic representation of New Objectivity right after the war. His work, The Night, gave birth to a darker, more disruptive brand of masterpiece. It triggered the art movement and inspired a new attitude for public life as well as art, literature, music, and architecture.

ENJOYED THIS The Night ANALYSIS?