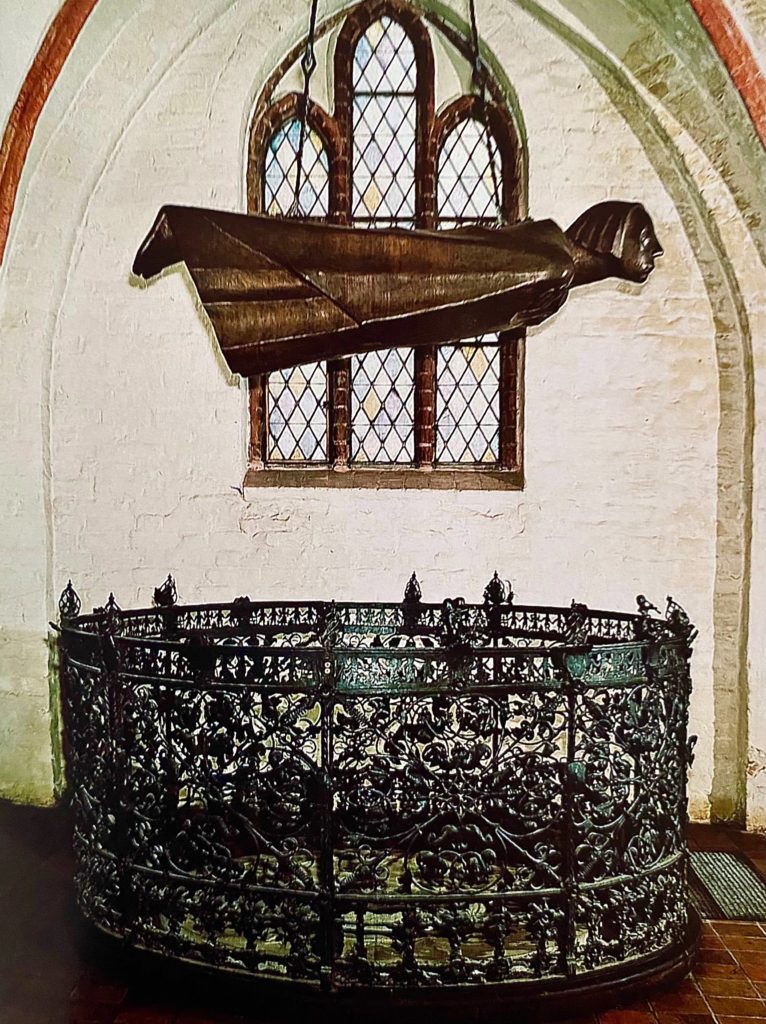 Floating Angel portrays the two worlds of human reality – body and soul. The spare bronze sculptural form represents a magical soul. He suspends this spectral soldier at an improbable height above the tomb. The sculpture lives in a Christian cathedral. So, this space symbolizes heaven. Or, at least, the spirit world where bodies no longer matter. I love the pure grace of the soldier’s spirit. It’s in stark contrast to the labyrinthine tangle below. This winding maze encircles the hidden tomb – a symbol of our conflicted world.

Ernst Barlach blends genres. That makes this bronze sculpture more than a Floating Angel. The figure floats above an intricate tomb. This represents death and loss. The complicated gate around the tomb represents life’s complexities. The gate’s coiled tendrils look sharp and scary. They surround the tomb. This is similar to how the toil and destruction of war haunt the lives of veterans.


The grave remains mysterious under ground. Death represents the greatest unknown. We can’t see the tomb. It’s a mere suggestion. Instead we see the complex metalwork. That reminds me of life’s entanglements. They keep us at war. This conflict also helps us attribute meaning to life and death. But no matter how many reasons humans give to war, life, and death; the latter remains an enigma. That’s why it’s so poignant that the tomb in Floating Angel stays hidden.

Transfiguration in the Floating Angel Sculpture

When we die our body goes through major changes. Many religions purport that our spirit and body separate. But even non-believers face a transition in death. There’s no escape from the end of our physical lives. That finality is the greatest unknown. Barlach represents this mystery with the void between the tomb and body. Negative space often reveals the key to understanding a work of art. Even emptiness has meaning.

That space is where transfiguration happens. A human life changes form. Once entombed, we are forever transformed. But that’s all we know. I love how Floating Angel conveys this simple truth with such placid clarity. Its peaceful resonance feels palpable in person. This may not come through the photograph. There’s profound power in the space when you’re standing near. The angel seems to float even though it’s still. That illusion of movement adds poignance to Floating Angel. It mesmerized me. This piece feels spiritual because there’s transcendence built into the composition.

In fact, this piece eclipsed time and space, even existence itself. That’s because Hitler hated this masterpiece and destroyed it during WWII. In 1937 the Nazis seized the piece from the Cathedral. They melted it down for ammunition.


But little did they know, Ernst Barlach made two Floating Angel sculptures. He gave the duplicate version to a friend who hid it away. After the war, a parish in Cologne bought this copy. Bronze workers then made a cast from that to replace the original in the Güstrow cathedral. This masterpiece overcame destruction. It returned home to bring the town a reminder of transfiguration.

What makes the Floating Angel sculpture important in Art History? 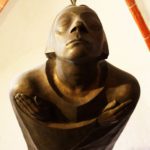 Floating Angel is to sculpture what The Night is to painting. Both painters, Ernst Barlach and Max Beckmann enlisted during WWI. The war also changed their subsequent artworks. Beckmann catalyzed the New Objectivity art movement with his new point of view. This genre amplified brutal ugliness.

Meanwhile Barlach moved in the opposite direction. His sculptures protested war with an outcry for peace. That’s why the placid epiphany of Floating Angel made such an impact in the art world.

Beckmann only pointed out war’s horror. Barlach enlightened viewers to the benefits of a truce. This sculpture resonates with serenity and calm. These were welcome after the tumult, trauma, and loss of WWI. Once again, Güstrow cathedral felt like the sanctuary it was meant to be.

Why is Ernst Barlach a significant artist?

Pacifism angered Hitler. He hated Ernst Barlach and labeled the German artist’s work Degenerate Art. Of course, this backfired. It spotlit the serenity people longed for during WWII. So, Barlach’s works like Floating Angel became all the more poignant. This scared Hitler.

In some ways Ernst Barlach’s now seen as an Art History martyr. He endured unrelenting torment under Hitler’s regime. Ernst Barlach artworks celebrated peace. But Nazi propaganda influenced and even controlled public perception. They stoked fear in society. It’s as if Hitler projected his primal terror onto others.

As a result many Germans shunned Ernst Barlach. He thus died an outcast and symbol of Nazi condemnation. This was in 1938, only two years after Hitler showed Barlach’s work in the Degenerate Art exhibit.

How much is an Ernst Barlach piece worth on the art market?

In 2012 Barlach’s wood sculpture Weinende Frau sold at auction for $938,500. This set a record for the German Artist’s work. But the sale also forecasts heightened valuations for Barlach works. So, it’s likely interested art buyers will need at least a million dollars in their budget for an Ernst Barlach sculpture.

ENJOYED THIS The Night ANALYSIS?